Total (Well Not Quite) Immersion

I've been getting back to my roots, so to speak, even though my particular roots are in Connecticut, my family roots are in the Southern regions of Italy, namely Calabria, Campania and Apulia. 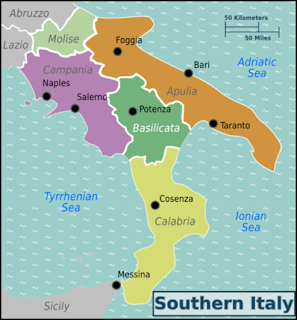 And I am taking a refresher course in Italian on Monday nights.

Today, I attended a concert by Newpoli Mediterranean Pulse - Ritmi Della Terra.
This contemporary group takes traditional Southern Italian music, e.g. the Tarantella, and gives it a modern flair. Despite my almost adequate knowledge of Italian, I have a hard time understanding it when the speaker is speaking fast, and an even harder time when they use any of the many dialects - of which Southern Italy has many.

The music of the group Newpoli is a celebration of those many regions and dialects, and while I had a very difficult time understanding the lyrics (actually I probably only picked up a handful of words here and there) I found the sound of the language, the sound of the dialects, somewhat familiar.

I would caution that they may not appeal to most people's taste and I do find the female vocalists a bit shrill at times.

Much better in person.


My grandparents and their contemporaries would often revert to their first language when they got together; I recall the cadence, the sing-song rhythm, the sometimes guttural sounds, the melody of vowels.

I recall the many weddings of older cousins which I attended when I was young and the fun we had pretending to dance the tarantella when the live band finally played C'è la luna mezz'u mare, Mamma mia mi maritare.

Here's a version that will give you an idea of the various potential spouses one might marry:

THIS SEEMS TO BE A SAFARI ISSUE...NO PROBLEM WITH FIREFOX

Dear Readers: I cannot reply to you!!!!

When logged into my google account I can access my blogger dashboard and can make new posts from there, but I cannot post a reply to readers' comments on my blogs when I go to "View Blog" or go to my Blog address directly. Reply post says Post as "Google Account" "Name/URL" "Annonymous" None of these options work. Upper right corner of blogs say "Create Blog" and "Sign In" - When I sign in (again) it is like I've done nothing at all - I still cannot reply to reader's comments - the blog/s does/do not recognize that I am the blog/s owner. There used to be a "New Post" option and my avatar would appear in the comment/reply section. I am having a similar problem with Disqus - I have to sign in for EVERY comment I attempt to post. I have gone through settings on the blog and safari; I'm at a loss. This seems to be a Google issue as it is the same on all of my blogger blogs as well as on Disqus.

After reading/viewing the sparring among the democratic candidates these past weeks I am becoming fatigued, bored, disgusted and angry. "He said, she said, no, I didn't say." Blah, blah, blah. Sanders-Warren-Biden.

Sanders, (do I need to describe him?) just needs to go away as far as I'm concerned and unfortunately when he does, he will likely take his supporters with him...they probably won't vote out of spite.

Biden doesn't thrill me either, but his so called "cuts to SS" that the Sanders folks are screaming about, were, it seems to me from viewing the linked videos, in the context of an overall freeze on government spending - a proposal for fiscal responsibility - something the R's purport to be one of their principles but which democrats have actually tried and succeeded in achieving on occasion. Supporting a freeze on spending is not the same as CUTS in one program. And just because one supports a strategy does not mean that they are forever obligated to support that idea, even when time and circumstances change. Get over it.

Warren is acting like she tripped and just slid down the wrong rabbit hole into Never-never Land. Liz, get over it.

Pete is looking like a deer in the headlights. Get out of the way, Pete, or you'll be road kill.

I just wish we could all get past this pettiness and get unified. All our candidates have baggage of one kind or another, be it age, gender, sexual orientation, voting record, race, or personality. We don't have a candidate who can please everyone and fulfill everyone's fantasy of redemption. Get over it.

I'm afraid the democratic line-up is beginning to resemble the fight to the death of gladiators in the Circus Maximus. Unfortunately, whoever is left will be too wounded to face the lion. I don't think the debates are doing anyone any good. They are not debates but rather, "take the bait" and fight with one another. I'm disgusted.

They all need to get over themselves and do what is right for the democratic party, for the country and for our future. Just have a private meeting, decide who will run and the rest bow out gracefully. Yeah, I know, I'm a dreamer.

Selfies With Benni, Wrinkles, Gout, And Make Your Bed

Saw a photo of some young, sexy shirtless guy with tats posing with his Siberian Husky...so was inspired to do some selfies with our dog, our Weimador, Benni. Neither of us is pedigree, but Benni is by far the more handsome. See below.

Back to Stonewall yesterday posted a 1970's listing of the gay bars in New York City. Each came with a description of the venue and/or the clientele likely to frequent each establishment. There were a number of leather/western bars and private clubs; other categories included raunchy leather, backroom, disco, cruisy, intimate, fun, friendly, piano lounge, cabaret.

But there was one that I'd never heard before: "wrinkle room"

And I thought to myself, "that's probably where I'd be relegated to now!"
And I admit, it made me laugh!

The gout acted up this week...something that's only happened once (well actually twice within a short time from the same trigger) in four years.

The last time was days after I had started taking glucosamine/chondroitin. Left big toe was swollen and painful. When I tried to recall if anything in my diet had changed, the only thing I could identify was the G/C. So I stopped taking the pills and the gout cleared up.

I did some internet searches and found nothing that would indicate that G/C was a trigger. I thought perhaps it was just coincidental, so after t couple of weeks, I continued with taking the glucosamine/chondroitin hoping it would help with some aches and pains.

Sure enough, gout in the right big toe flared up on cue. No more G/C for me, no more gout. That is until last Sunday evening.

We had been to a birthday celebration for a friend and I threw caution to the wind and asked for a gin and tonic. I am not a drinker and don't particularly like gin and tonic...but it was the only thing that came to mind when I was asked what kind of cocktail I'd like. Other's were asking for Scotch or Bourbon which I find distasteful.

My drink was 3/4 gin and 1/4 tonic. I had a hard time downing it...sips at a time. So, does anyone know if GIN will trigger a gout attack?

It flared up Sunday evening, had me down Monday and mostly cleared up by Wednesday...until Friday when I wore some rather tight-fitting hiking boots because we had a good snowfall...well, Friday night I was awake and in agony again till 2:30am when the second dose of indomethacin and ice pack kicked in to offer me some relief.

And on Friday Leon had been suffering some anxiety about work and we had to take Benni to the Vet because he'd been having diarrhea for two days since he must have gotten into something when we were walking in the arroyo and I wasn't watching him.

I told Leon that we've had such a good run and good karma, we can't complain. But maybe our karma has changed. Either that, or it was because we didn't make the bed Friday after getting up.

Lessons for this week. Embrace your wrinkles. Stay away from glucosamine/chondroitin. Don't let the dog eat dead animals or coyote poop. And always make your bed.

As you can see, Benni is not the easiest subject to get to pose for a selfie. BUT ISN'T HE CUTE? 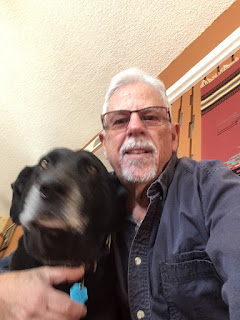 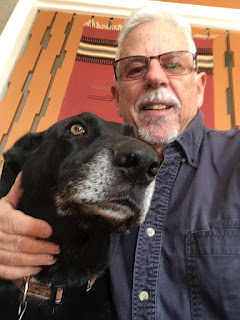 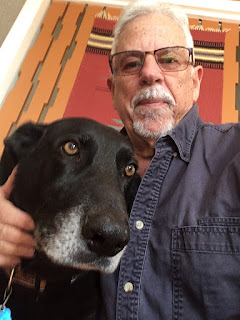 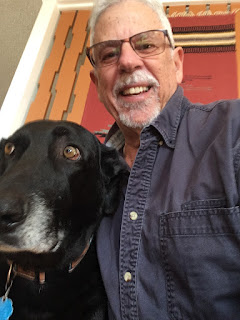 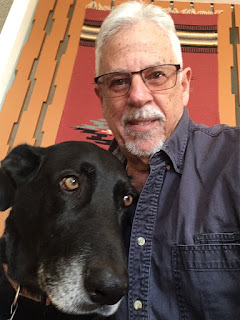 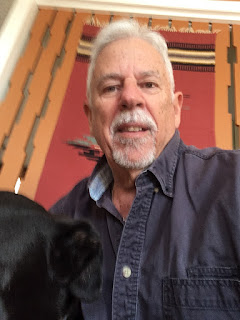 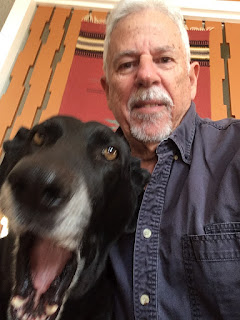 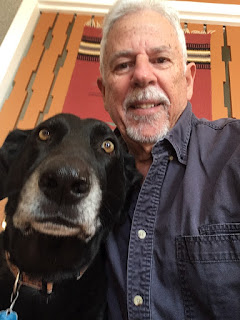 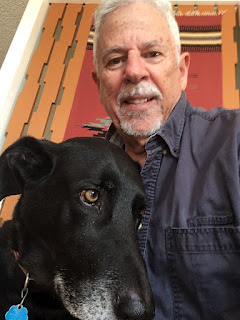 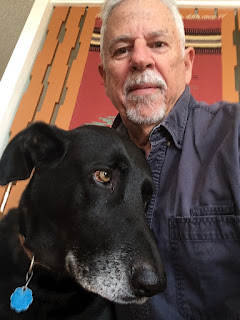 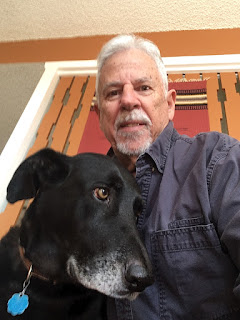 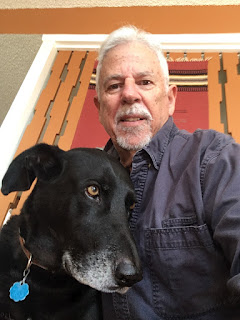 Gettin Into the Italian

I'm not sure why I've been getting into my Italian (more than usual) but I have been making homemade pasta, Italian bread, manicotti, not to mention the Italian Christmas cookies.

And another food series, "Two Greedy Italians" - My father's parents were from Calabria so I was very interested in this episode. The part where they have to slaughter a pig made me get teary-eyed. I'm such a whoose. The men talk about the respect for food and how nothing is ever wasted.

Here are some of my creations. I usually don't even think of taking photos when I'm cooking so I don't have photos of some of the other pasta I've made.
I've also just started taking an Italian language course to brush up and hopefully improve on my limited conversational skills.

A Christmas Video From My Niece...Sorry I'm Posting So Late

An original song and music by Andrea DeFrancesco