Book Report: "Christ Stopped at Eboli - The Story of a Year" by Carlo Levi 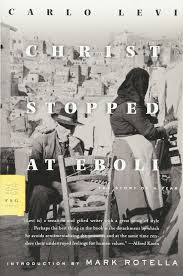 Book Report: Christ Stopped at Eboli - The Story of a Year by Carlo Levi

This book was recommended to me by my cousin Elaine who said if I was interested in learning more about the historic Southern Italy this book by Carlo Levi would offer great insights.

Levi wrote the book in 1945. Levi details his sojourn in Gagliano (pronounced ga-liano) that took place in1935 when he was exiled as an anti-fascist political prisoner to a small mountain village in Southern Italy. It was thought that sending and confining dissidents to one of these villages was worse than prison.

The title of the book, Christ Stopped at Eboli, signifies how the peasants felt about the godforsaken land of Southern Italy where they lived.

Eboli is a town about 60 miles south of Naples. The people in the southern provinces of Basilicata and Calabria would often say that they were forgotten by the State, by the Church, by their conquerors, by their landlords and by Christ himself. They were certain that Christ himself, had he been to Italy, would never have set foot south of Eboli because it was such a wasteland. They were even reluctant to call themselves Christians, a word that was equated with being human - they were merely animals, not human beings, south of Eboli.

Levi, (and certainly his translator as well), is both eloquent and down-to-earth in his descriptions of the people and events that took place during his year in Gagliano when he was embraced by the townsfolk as the new doctor. Levi had some medical background and his knowledge of medicine was a godsend to the people of Gagliano which, like the entire region was devastated by malaria. All the peasants had at their disposal to treat illness or injury were spells and magic and potions.

Levi repeatedly describes the poverty that is so ubiquitous a presence that it is an entity of itself and his story would make no sense otherwise. But he is not sentimental or sensational or detached in his recounting of the events of the people of Gagliano. He does so with a great deal of respect and even admiration for the peasants whose lives are a continual struggle against the powers that be and their own existential predicament.

The territory of Southern Italy had been conquered repeatedly by foreigners from the ancient Greeks and Romans to the Spaniards and the Bourbons. Given the perpetual state of poverty and of being the conquered, the peoples of Southern Italy devised many survival strategies which included a certain temperament of the people - a kind of balance between rebellion and despair, ancient superstitions and belief in magic and spells, unquestioned customs and rites.

My interest in the book stems from the fact that my paternal grandparents both came from a mountain town in Calabria. Although they came to America in 1910, before Levi’s year in exile, they came out of the same poverty and environment. I was able to relate my visit to the town of my ancestors in Calabria in 1968 with much of what Levi described. I can’t help but wonder which, if any, of my character traits or psyche are rooted in that ancient Calabrian consciousness.

This book may not hold the interest of most of my readers but is certainly and eye-opener for anyone whose ancestors came from Southern Italy. Most Americans of Italian descent have no idea. And today, when some Americans are so afraid of immigrants and ready to build walls, the stories of yesterday's immigrants have lessons for us.

If interested, you can read some excerpts at Amazon.

Also recommended is the PBS Documentary Series, The Italian Americans

ADDENDUM - EXCERPT FROM MY MEMOIR:  1968 trip from school in Rome to Spadola

My fascination with Italy, my desire to learn the language, and my plan to visit Grandma’s village were all part of an unarticulated scheme to consolidate my fragile identity as an Italian and establish my right to belong, if not in Italy, then in my own family. After all, it was Grandma who once told me: “You are not-a like-a the other grandchil’ren.” Perhaps I would fit in better if I were more Italian.
During the Thanksgiving break I went to visit my father’s aunt and uncle in a small village in Calabria, in Southern Italy. Spadola was the town where my paternal grandparents lived before sailing to Ellis Island on their way to Hartford, Connecticut’s Italian neighborhood. Without much of a plan, I hitched a ride to Naples with a fellow student who had a car, and from there I was able to hop a train to Vibo Valencia, the closest station to Spadola.
In a forlorn trattoria near the train station, I ordered a plate of spaghetti and, having no idea how I would complete my journey, I asked the waiter how to get to Spadola. My inquiry was soon relayed to a group of men who interrupted their wine drinking and loud talk to huddle like members of a soccer team deliberating a strategy. One of them emerged, having been appointed by the team: a middle-aged man with several days’ growth of beard, a scruffy v-neck sweater and an English style cap. A cigarette hung precariously from the corner of his mouth sending smoke into his right eye.
He took the cigarette with his thumb and index finger and, exhaling a lungful of smoke, he said in a mix of English and Italian, “I take-a you a Spadola, dieci milla lire, va bene?” For about sixteen dollars American, he would drive me the forty-five or fifty kilometers to Spadola.
Desperation, or at least a lack of options, made it easier for me to trust this guy. We got in his Fiat Cinquecento and we drove off together into the hills. As soon as we reached the top of the first big hill in the middle of nowhere (there is, apparently, a “middle of nowhere” not too far from everywhere else on the planet), we came to a slow roll as Guido took his foot off the accelerator. As we passed the crest of the hill and, with obvious deliberation, he then turned the key off, killing the car’s engine. He turned to me and smiled. This made me more than just a little nervous.
I asked him what was going on, “Che succede?”
“Non preoccuparti,” he replied for me not to worry.
Then he rattled off something in an Italian dialect that I did not understand as he simultaneously lit a cigarette and let the car roll down the hill. I learned that there were plenty of mountains between Vibo Valencia and Spadola but no petrol stations. Guido was determined to save gas however he could.
We eventually arrived in Spadola with fuel to spare and my driver was able to locate my relatives by asking a villager. My father’s aunt, Zi’Giuseppina and uncle, Zi’Francesco, were unprepared for my arrival, as I had never given them a definite day or time to expect me. But they and other relatives in the village were more than welcoming and accommodating.
My father’s cousin Vito, whom Dad never met, owned a small general store and he secured a piece of beefsteak for dinner on my first night there. This was a gesture of respect and honor for a relative from America—a kindness I didn’t feel I deserved. On the contrary, I was embarrassed to be the only one at the table with meat on his plate. Such gestures made me aware that I was an outsider, no matter what my bloodline. There were very few young people in the old village, most having left to find jobs in large cities.
One middle-aged Spadolese, perhaps slightly embarrassed by the poverty of his town and with a sharp flavor of resentment in his voice, told me, in fairly good English: “You come-a here ehn you see how-a we are live. Then you-a go back-a your big villa in Ah-mee-rica and tell everybody how poor we ah’ here. You will-a never come-a back. You too good-a for us, no?”
The short time I spent in Spadola gave me a first-hand perspective on Grandma’s stories and my roots as well as three-dimensional memories to try to fit into my new identity: my great aunt and great uncle’s home with a fire pit in the kitchen and the pot of espresso brewing in the embers; the sound of zampogne—ancient Roman bagpipes—playing pastoral hymns at dawn in honor of the novena to Saint Nicholas; the hunt for wild mushrooms with cousin Vito and his two kids; the town’s ancient fountain; the church my grandmother helped to build.
But all of these images, rather than bring me closer to my identity, only made me more keenly aware of the fact that I was very different and did not belong. Having grown up in a small New England city where we were the “Italians” among the “Irish” and the “Polish” and the “French,” I never thought of myself as“American” until some Italian university students, pointing to a group of us from the U.S. and gesturing wildly, referred to us as quegli americani—those Americans.
I never expected my quest for an identity to entail my being an American. I would never be an Italian, nor did I feel like I would ever really fit into the Italian-American culture of big weddings, baby-making, baptisms, and huge family gatherings.