Most likely the nicest lake and campground we have visited in New Mexico. And the nearly perfect weather that we’ve had this summer. It was about 84° with a nice breeze and low humidity. I would say that the water it is not very inviting for anyone who likes to swim. But apparently fishing and boating are very popular pastimes here.

It is not our beloved Province Lands and National Seashore in Provincetown, MA but it will do for now. 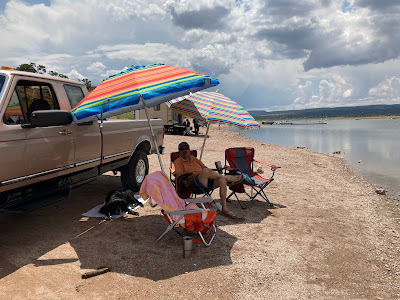 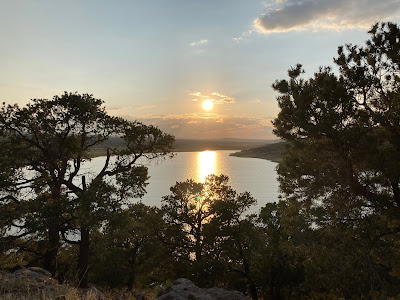 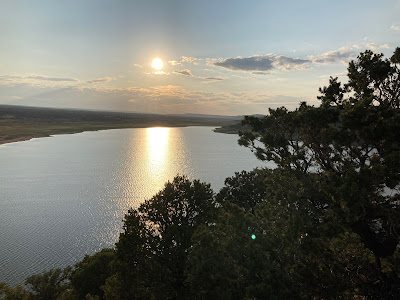 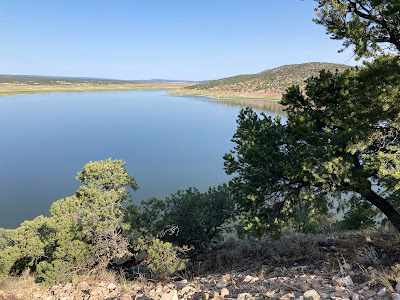 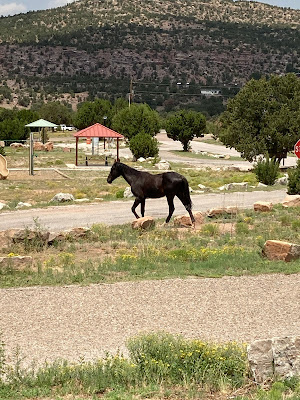 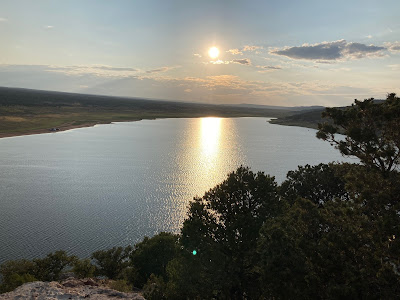 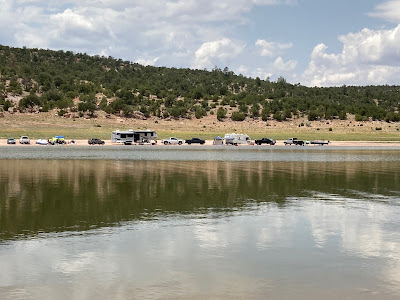 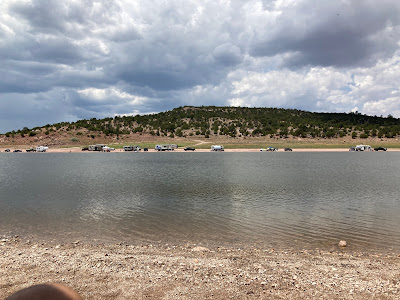 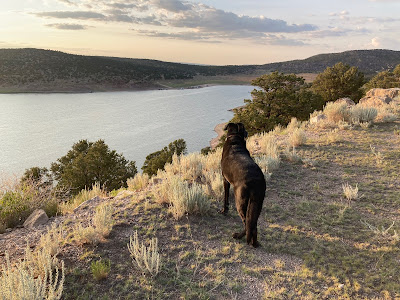 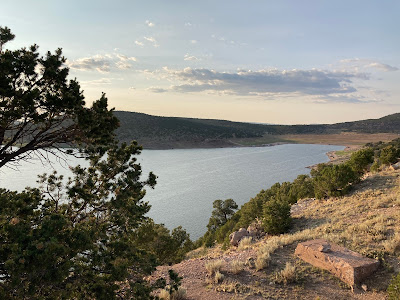 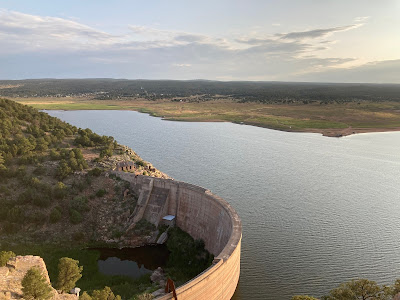 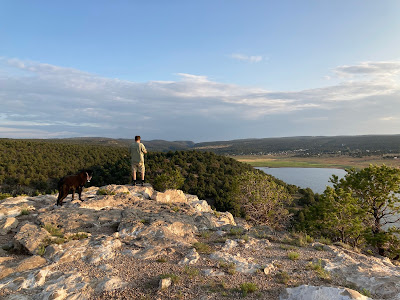 Finally a Bit of Joy From My Garden

As I have mentioned before, gardening in New Mexico can be quite a challenge: horrible soil, worst drought in years, gale force winds in May and June and into July this year, intense scorching sun all day, cold nights in April and May, monsoons in July and August, hungry, thirsty squirrels and other critters, etc.

But today all the effort and hard work of protecting my growing things began to give me a reward. Not so much the small harvest of veggies, but more so just the lushness of the vegetation...tomatoes, squashes, herbs, flowers all sharing space in the garden...it really made me happy...the reward was emotional...

It broke through a bit of a depression I and hubby both have been going through. (I guess I could write about that, but not today). Today, the garden made me happy. 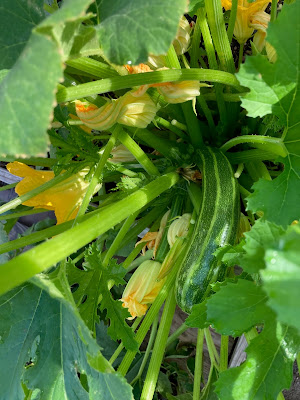 The garlic is not large, but it will do. Plant on the shortest day, harvest on the longest day (approximately). 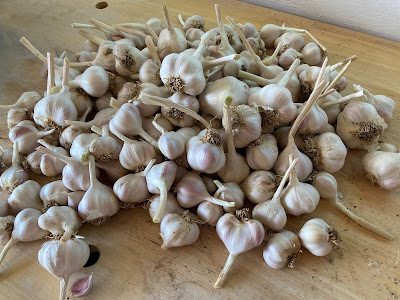 The four o'clocks are profuse this year. 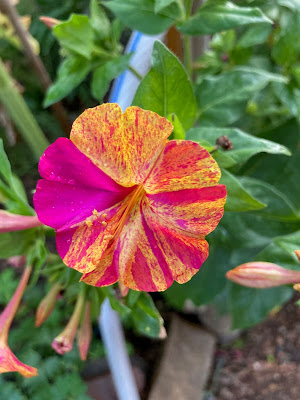 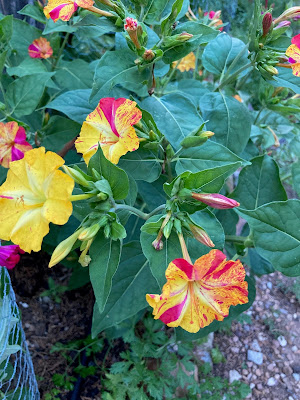 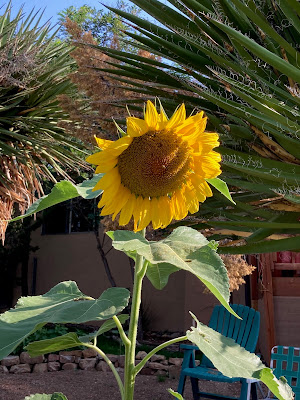 Parsley has re-seeded itself every year and is growing wild beyond the fence and outside the garden beds. 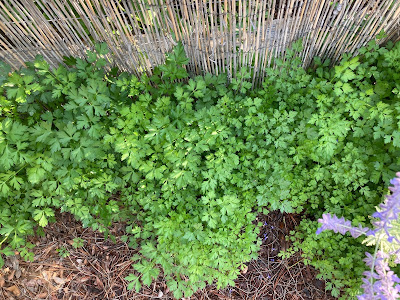 Today's harvest included red potatoes which were volunteers, Swiss chard, zucchini, tomatoes, basil, parsley and a handful of green beans (there should be lots more but the squirrel ate the first planting just as they emerged from the soil, so I had to replant. 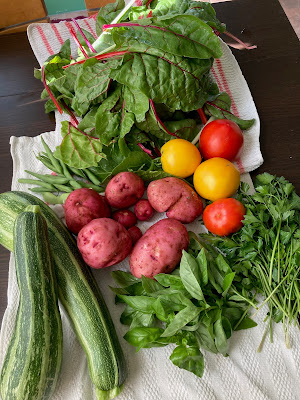 "Volunteers" are plants that grow in the garden but were not purposely planted by the gardener. In winter I bury kitchen scraps directly in the garden instead of putting them into the compost pile (composting here in New Mexico is almost as challenging as gardening because it is so dry).
So all those peelings from the potatoes, the seeds from pumpkins and squashes and other veggies survive the winter and start growing in the spring.
So this year the volunteers are acorn squash, pumpkin (or is it a pump-cchini?) butternut squash, one tomato plant, red potatoes, zinnias, fennel, parsley.
I'm tempted to "just see what grows" next year and have an "all-volunteer" garden!
Homemade bread and scacciata. 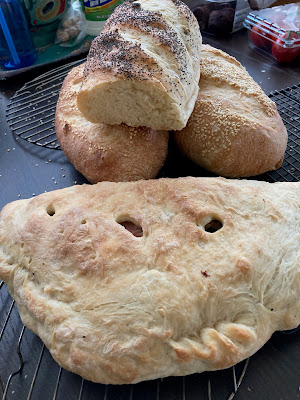 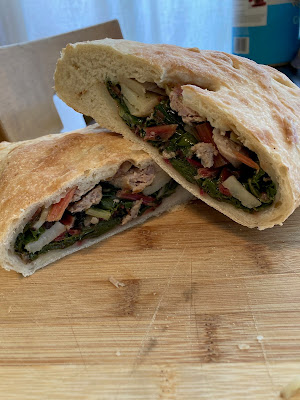 San Francisco Gay Men's Chorus receiving death threats over a song they did about "recruiting" kids not to hate. The comments on the YouTube posting of the video are filled with hate, lies, homophobia and vitriol.

How discouraging it is to see so many anti-LGBT comments about the lyrics taken entirely out of context. If the comments are any indication of the sentiments of our society...things are much worse than I imagined and we are in for much more than hateful words.

The video is creative and quite innocent. But the trolls have been having a field day with it. It is not the video that should be taken down but at some point perhaps YouTube should suspend comments.

The video has been blocked but may still be available to view on YouTube.

Growing things in New Mexico is sometimes a challenge. With the intense burning sun (the thin atmosphere does not filter out any burning rays) and the record drought and the nearly hurricane force daily winds in the spring, the plants are easily parched and stressed.

Even though the back yard is fenced, there comes in the dead of night or early morning, the critters - squirrels, rabbits, pack rats, and then come the insects, the birds - all looking for juicy morsels, eating leaves, pecking at fruits, etc. not to mention an occasional hail storm.

After using humane traps to relocate 6 squirrels and concentrated fox urine to discourage other wild life (it didn't work) I have put cages around the most vulnerable plants and when that did not seem to be sufficient I finally erected a cage of bird netting enclosing the entire main vegetable garden, sides and top, which is approximately 12'x14'.

Talk about keeping busy. (Mitchell, you wonder why I envy your being by the ocean. I could lay on a beach 8 hours a day and be content and shop for fresh produce at the market.)

We have begun our "monsoon" season here in New Mexico and have had a few rainy days. The garden has responded. Natural rain does wonders - that water from a hose or spigot or irrigation system doesn't do.

So here is a tour of my gardens.

I already harvested the garlic. It is drying/curing on a rack in the garage. Garlic is a staple in our kitchen. We also ate all the lettuce and arugula as they are early veggies.
And that is my garden tour for July 1, 2021. I will be sure to post an update or two or three as things progress.

Have a great Holiday weekend!