Six+ inches of snow at 9am and still coming down!

Three years ago we had Thanksgiving dinner al fresco on a neighbor's deck in 70 degree SUNSHINE!!!!

On a ten-point scale of obsessive-compulsive I would rate myself a solid 6, maybe even a 7 and on some days a tad bit higher. I like my home and my surroundings, my checkbook and my emails, my computer files and my kitchen to be, if not pristine clean, at least organized and orderly.

I'm almost certain that keeping my environment free of clutter and in some semblance of order is, in part, a counterpoint to a world in chaos.

Most of the time I enjoy cooking; I do the grocery shopping and plan meals around which veggies I have on hand, and how I can best transform the leftovers from a Sunday meal into a Tuesday dinner. Cooking is what I do and I enjoy producing edibles from scratch: muffins, breads, pasta, pies, and entrees.

I am in the kitchen a lot and the only time of day that I really get cranky is when I'm preparing dinner and it's late and I'm tired and I haven't got my house in order - like there are dishes in the sink and laundry to fold, and I'm behind on all kinds of tasks, because I've been shopping in town or spent the whole day doing yardwork. The lack of order and organization makes me irritable and anxious, especially because it's my own fault that I am not superguy.

I can mostly keep my anxieties at bay by keeping my environment uncluttered and my routine predictable. I can be spontaneous of course, but it's usually best if I plan ahead for that eventuality.

And so it happened that last evening I was preparing a roast pork with fennel, onions and potatoes with asparagus for dinner with guests and making onion/mushroom soup for another meal (because the mushrooms were on their last day of freshness) and trying to take a moment to sit with the hubby and drink a glass of wine.

I went back to the kitchen to check the roast. I opened the drawer where I keep various odd kitchen utensils to grab the meat thermometer. 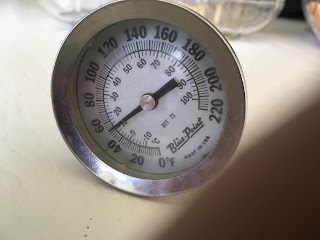 I didn't see it in the location in the drawer where I usually keep it. I needed that thermometer and I needed it now.

So I rustled through the cheese grater, the skewers, the chopsticks, the strainers, the knife sharpener, the electric mixer, the measuring cups, the micro-plane, the submersion blender, the pastry cutter, and a number of other miscellaneous items.

And the drawer was now so disorganized I could feel my anxiety on the rise.

Confession: I took everything out of the drawer and threw it on the counter with as much slamming and crashing and assorted expletives as I could to demonstrate my frustration and anxiety.

A misplaced meat thermometer, an insignificant entity in the vastness of the universe and amidst all the violence and suffering and greed and chaos in the world at large, had disrupted my small, mostly orderly world and I lost it.

I put the roast back in the oven and went back to stirring the onions and mushrooms in the skillet, adding the white wine and searching two other drawers for the elusive meat thermometer.

There it was, among the spatulas and serving spoons, an illegal alien, in a place it did not belong. Helpful hubby had obviously been putting things away again.

One hundred forty degrees. The roast was not quite done. It went back in the oven, I turned off the flame under the onion/mushroom mixture and I went back to sip wine. The anxiety-anger toxins were still rushing through my bloodstream. It took a while to calm down.

The roast was tasty and dinner went well.

Later I put everything I had thrown on the counter back, each item in its proper location in the utensil drawer.

The world was still in chaos, but my drawer, my kitchen was back in order. I felt some semblance of relief.
But today I came to realize that we all must be feeling anxiety to some degree. And maybe we don't even realize it because it is ubiquitous and persistent.

From the barrage of news and information about politics and senseless gun violence, our subservience to our iPhones, the inconveniences of modern conveniences, the endless usernames and passwords we need in order to function, the absurd antics of celebrities, the islands of plastic in the ocean, the changing climate, the challenge of navigating through the looking glass, the sorting out of truths that are not true and lies that purport to be true and the very destruction of our democracy.

It's no wonder a misplaced meat thermometer in a world gone crazy can seem like a catastrophe.
Posted by Frank at 1:09 PM 5 comments:

When Grandma said "You don' know-a nuthin' a yet" she usually meant that our young lives lacked a range of experiences that would teach important lessons and that, in time, we would live them and learn them. She would always add, (depending on her age at the time), "And I'm-a eighty years old-a and I don' know-a nuthin' -a yet." She had that Southern Italian accent that made her seem so ancient, so wise, so venerable. When once we questioned why she would say that even she knew nothing, Grandma told us a story that went something like this:

A long time ago in Italy there was an old woman who was dying. She had always been a very beautiful woman from the time she was young even until then in her old age. And because she was a good and devout woman she prayed, thanking God for a good life and good fortune, for her children and grandchildren and great-grandchildren. "Dio mio", she prayed, "I am dying and I am ready to join my husband and the saints in heaven. I thank you for sparing me the awful death of my sister's husband Salvatore, who was crushed by falling stones in the earthquake, or the unthinkable death of Zi' Maria who was burned in the fire so badly that her family could not know her face in the casket. I am thankful to be dying here, my body, old, but still without a blemish. Grazie, Dio." And after a little while she passed peacefully as the priest performed the rites and her family kept vigil.

The old woman's funeral began with a procession from her home to the church. In the hills of Calabria the churches were often built on the highest hill in town and have many stairs leading up to the entrance. And so it happened that while ascending the steep steps to the church, quite near the top, one of the pallbearers tripped and sent the rest of the men off balance as well. The casket was let go and went tumbling down the stone steps, expelling the body of the old woman, whose flesh was torn and whose bones were now broken and twisted from the mishap.

Was it just an obvious lesson? Even a good old woman can be guilty of hubris. I am reminded each day that at any moment, within the space of seconds, lives can be, and are, regularly altered, changed forever: either by personal folly or by fate, or because of the compulsions of others.

As I write this I reflect on whether it was by folly or fate that events conspired last week that may result in my losing my job. My life could be altered, changed significantly if I lose my job.

I see myself a kind of "post-existentialist" (is there such a thing?) and as having less in common with Satre than with Sophocles: my perceptions have shifted from the sense of being “thrown into a random world” to that of the world (or everyone else’s worlds) “being thrown at me" with an inevitability that defies randomness. Truly, at this moment, despite the double negative, “I don’t know nothing yet”.

My ancestors, more ancient than Grandma, sitting in amphitheaters at Paestum or Agrigentum understood the inevitability of fate as they experienced the pathos and tragedy of Oedipus dramatically portrayed: how the Scheme to thwart his fate as foretold by the oracle puts into motion the very events that lead inevitably to his fate's fulfillment. My folly and my fate may seem insignificant next to men who, like Oedipus, or presidents, wield power: men who are compelled by their own hubris to set events into motion; men who, unlike Oedipus, experience no angst or honesty. Will the gods take notice?
Posted by Frank at 6:56 PM 4 comments: