Marriage equality approved by 62% of those voting.

SCOTUS take note! This is revolutionary! This is the future.

The Sisters of Mercy held a funeral Mass this evening for my sister, Mary Ann DeFrancesco, RSM (Religious Sisters of Mercy). She was 75 and died unexpectedly, likely from a sudden onset recurrence of a rare blood disease called TTP. Her obituary can be seen here, if you are interested.

MaryAnn had some intuition that she might not survive another bout of the disease and had set forth her wishes including the readings and music selections for the Mass this evening. The readings and hymns were well chosen and the ceremony was both simple and beautiful. It reflected her personality, her spiritual values and her simple faith.

In addition to my relatives, so many of my and Leon’s friends came to the service. Their presence there said more than words can convey. We are blessed with such good people in our lives. Thank you all.

There are a few things I want to say about my sis, Mary Ann. She was a modern nun. Hadn’t worn a habit in years. She was a lover of nature, of the seasons, of the sun and the ocean and I think much of her spirituality was nurtured by the beauty of the natural world. She was never preachy or judgmental, though she didn’t hesitate to express her opinions about a number of topics.

She, and many other sisters were deeply hurt and distressed by (what I call) the Papal Inquisition that was initiated under Benedict 16 to investigate and intimidate women in (American) Catholic religious orders who were acting on the directives of the Vatican Council 2 under John 23 and as a result were modernizing their ministries and way of life. I would say that the Sisters of Mercy of the Northeast are quite progressive.

In addition to investigating the nuns, a major crackdown on progressive Catholics was begun by Ratzinger under JohnPaul 2, continued by him as Benedict 16  and is continuing even now by many Bishops who haven’t gotten the memo that JP2 is dead and Benedict has resigned.

It was for that reason that prior to Leon and I getting married last October, I told my sister that while she was certainly invited and welcome, I was afraid she might be excommunicated if she were to attend a gay wedding. She said, “Don’t worry, I’ll be there.” Her presence at our wedding was so important to both of us and she seemed to enjoy it immensely. Even the sisters in her house sent Leon and I a lovely card and personal note of congratulations on the occasion. These nuns have chutzpah. 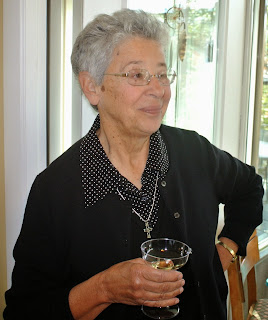 But I was totally unprepared for what the priest said this evening during his homily in front of the entire congregation of sisters (there had to be 75 or more) and family and friends. When, at the end of his brief sermon and remarks he offered condolences to Sister Mary Ann’s family: “to her brother Frank and his husband Leon, her brother Michael and his wife Claire, nephew Joseph and niece Andrea.”

Leon, too, was surprised to hear himself being referred to as my “husband” by a Catholic priest speaking from the sanctuary of a Catholic chapel. Something I couldn't have imagined, given the times. Somehow my sis was responsible, I’m certain. Thank you, Mary Ann. 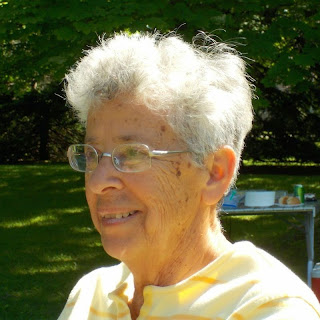 Fish Out of Water OR Why Is Everyone Talking Chinese?

Went to Hyde Park, NY with my hubby for the Lambda (Gay) Car Club Nutmeg Chapter Invitational event this past weekend. (Why the Nutmeg Chapter - Connecticut is the Nutmeg State - and that's another question altogether - is held in New York State is too long to explain).

So there I am, someone who cares zero about Old Cars, in with all these guys who obsess about old cars and many of whom spend lots of money collecting and restoring and maintaining and storing their Old Cars. Honda Fit. Talk about fish out of water.

I am an introverted type to begin with and even more so in a large group of people with whom I either have nothing in common or have nothing "of the moment" in common. The moment being totally and completely about Old Cars. The more I heard about Old Cars the more introverted I got. This is right up there with the Yankee Candle Factory at Christmas time as fun things not to do. The candle perfume and holiday decor make me think I've died and gone to hell.

While these guys were in heaven, I was at the very least in Purgatory.

When these guys talk Old Cars and Motors and Car Parts and Mechanical it sounds to me like Chinese or Greek or whatever language you want to use to make the point that their language was Old Cars. 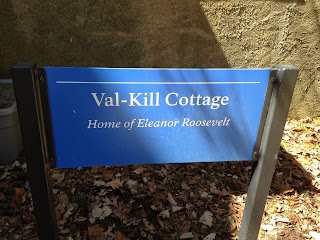 So I took a little time to go visit Eleanor Roosevelt's cottage, Val-Kill. (In the Hudson Valley you have a lot of Kills, the Catskills,  Fishkill, Peekskill, Walkill...you get the picture. I think it means creek or brook. My National Park Service Senior Pass came in handy for free admission. I had already seen FDR's place a couple of years ago.

The Val-Kill tour was very interesting and we were escorted through the house by Ranger Mark, our very beary tour guide of whom I do not have a photo, of course. The Cottage: fully and simply furnished with the actual or reproduction furnishings as it was when Eleanor last lived there. 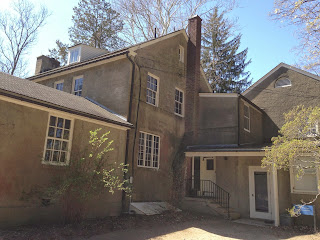 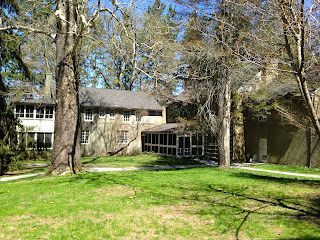 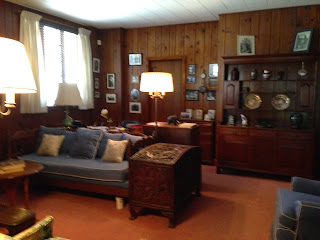 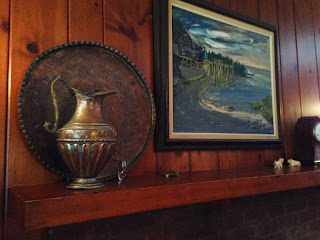 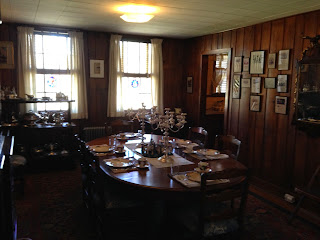 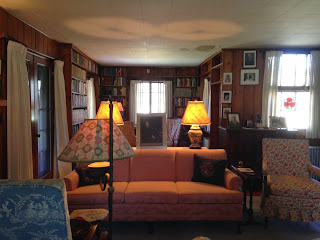 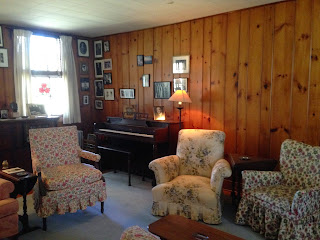 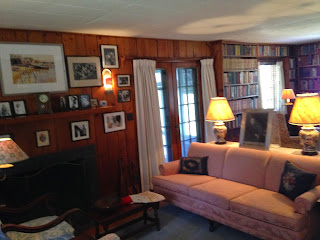 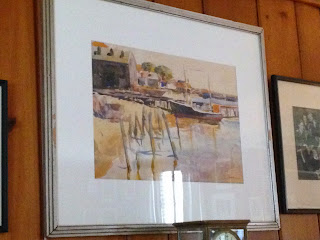 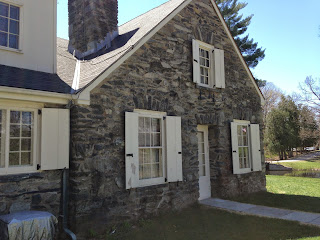 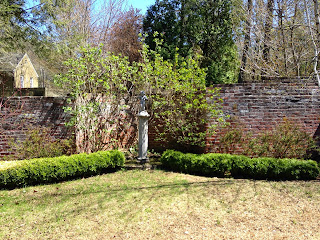 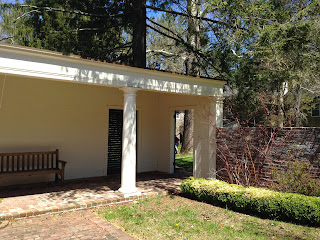 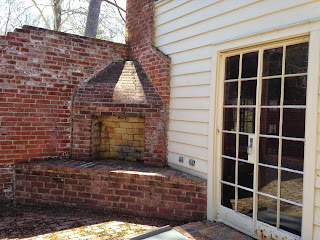 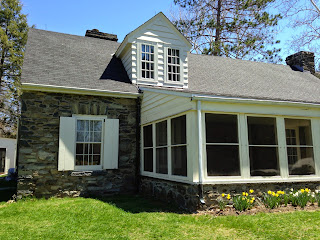 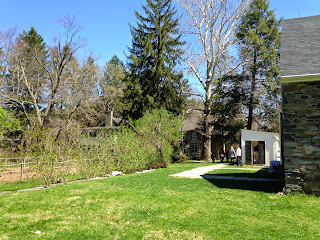 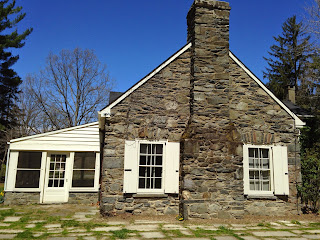 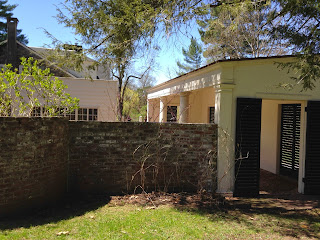 On the grounds of Vanderbilt: 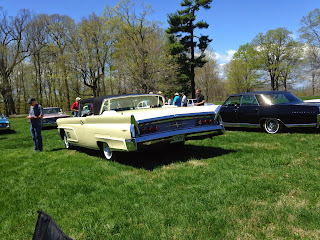 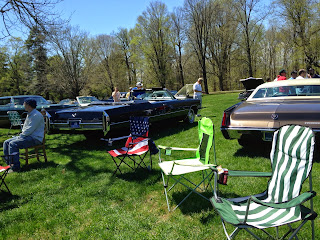 Great views of the Hudson River from the Vanderbilt Mansion property. 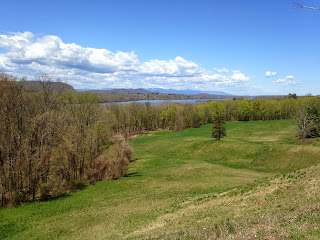 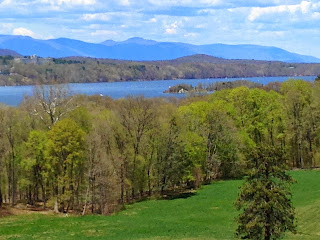 And I went off to the garden shop and well, other than that I was mostly bored. I hate to say that, but there was little general conversation going on, and even then, it always revolved around cars in some form or other. Like "I remember that time at your uncles funeral, you were driving the Pontiac or the Packard or the 57 Caddie or whatever."

There were 60 guys at the banquet, the food was good, but I left after dessert. Back at the hotel, I kicked back on watched TV. No, I didn't actually watch, it was just on. I think I drifted off...the beach is where my heart is...