With all due respect for the victims of anti-Semitic violence in Pittsburg, their families, their loved ones and the entire community, I post this entry:

I watch the news every day and I am generally expecting, (and my expectations are always met),  more outrageous news from the current administration.

All the blogs I read are commenting on the news, expounding on the outrageousness and stupidity and dangers and illegalities, and atrocities of the administration and its supporters.

So I have pretty much given up blogging about it myself, as others do a good job and, well, who reads this blog anyhow?

But every once in a while there is a story that really gets under my skin. This is one of them:

Link: Article on Pence's "Christian Rabbi"   (Be sure to read the Twitter comments in the article)

Who knew there were "christian rabbis" trying to convert Jews?

And that one would be invited pray for republican candidates days after the shooting at the Synagogue in Pittsburg, rather than pray for the dead?

The height of insensitivity gets higher every day with this arrogant, ignorant, self-serving administration. Hubris beyond the definition of hubris.

I fear Pence (who is calculating and fanatic, if not outright evil) is inherantly more dangerous than our president (who is merely a stupid, arrogant, narcissistic puppet).
Posted by Frank at 1:45 PM 3 comments:

I Guess This Is A Bright Spot In The Week's News

Matthew Shepard's ashes were interred this week at the National Episcopal Cathedral.

A bright spot because the interment is not only fitting and respectful, but it also serves as a strong message to all fundamentalist christians that they do not speak for all people of faith. Especially in view of the fact that Matthew's parents legitimately feared that any grave or memorial site would very likely be vandalized.

That is a sad commentary on the state of our world.

Over the past twenty years we LGBT folks have seen so much progress: we've won Supreme Court victories, we've gotten marriage equality, we've had LGBT celebrities come out, we see sympathetic, multi-dimensional and mainstream LGBT characters on TV and in movies. We've gotten the sense that we've arrived, that we are not only tolerated, but accepted and even admired; that the world we live in has become safer and more enlightened and that our country's values have evolved.

UNTIL the new wave of hatred, intolerance and bigotry arrived on the heels of this current president's campaign, beginning in June of 2015.

The floodgates were opened further on election day 2016, when many of his supporters felt that their hateful opinions were given legitimacy and they became hell-bent on un-doing and destroying everything that Mathew Shepard and the LGBT community had fought for and achieved.

It is just inconceivable how we have arrived at this place.

And all those allies and friends sometimes really don't seem to fully get it. There is danger afoot in this administration and among it's rabid supporters. Stay vigilant.

We will not be shaken, we will be strong. Stay strong my friends, stay strong.
Posted by Frank at 6:59 PM 2 comments:

This is for my hubby, Leon, in celebration of our 4th Anniversary and 30 years of sharing our lives with one another. So I am posting this little slide show of some of our moments together. It maybe a bit pretentious, but hey, it's my blog.

I, we, Leon and I, have been truly fortunate.

During my many years of self-doubt and anguish I never believed I would have a boyfriend, a lover, a partner, a spouse, let alone 30 years of friendship and love. Such things were not even in my realm of imagined possibilities.

But here we are. After 30 years, still going strong for one another.

Thank you Leon, with all my love:

Music: Jeff Krassner, I Will Be Strong For You from the album of the same name.
Posted by Frank at 10:37 PM 4 comments:

Australian Detective Tori Lustigman gets deeply  involved in investigating the murder of a gay man near Bondi Beach. She and partner Nick Manning are led on a trail of evidence that goes back to a series of gay-bashing murders that took place in the 1980s and 90s that were never solved or pursued by the authorities.

Intricate threads of evidence and connections are revealed as the story evolves and the many loose ends keeps one wanting to watch and learn more. There is not only the mystery being solved, but also the many deeply emotional scars that the characters reveal during the investigation that make the story compelling. (not to mention some eye-candy) We had to watch it through to the end of the 4th episode to see how the many loose ends are finally resolved. Definitely recommended (but if you are anything like me when it come to other than American English), with this caveat:

USE YOUR CLOSED CAPTION OPTION because the Australian accent is very strong (especially that of Chief Inspector Peel). The closed caption made a world of difference as I was getting exhausted trying to translate Australian to English in my head and missing much of the dialogue. Did the rewind from the beginning after 10 minutes, with captions...much better.

The story is based on actual cases of a large number of murders of gay men that took place along the Australian coast in the late 80s and early 90s. *


After a whole day of cold, dreary rain on Sunday, we woke up to this, this morning: 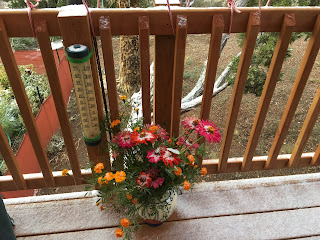 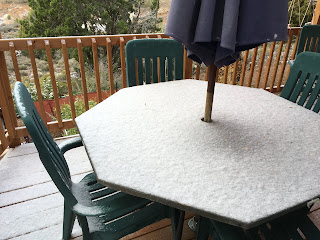 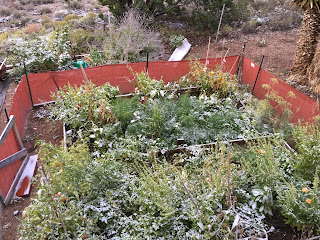 Much too early in the season for snow and freezing temps in this neck of the desert. Hope I can save some of those tomatoes!

* Note: I have been irritable, angry, cranky, depressed and disturbed all day today (Monday) and I think it has something to do with after-effects of watching the "Deep Water" story. The fact that gay men were (and in many cases still are) bashed and murdered for being who they are, is disturbing to the core.

As Wikipedia states "The drama is based on the historical, unsolved hate murders of possibly 30 to 80 gay men in Sydney's eastern suburbs and beaches in the 1980s and '90s."  A documentary was aired by Australian TV at the same time as the series.

I haven't watched the documentaries yet...I'm not sure I'm ready emotionally to watch.

We returned home from our extended vacation just one week ago today. Two adults and a 100 pound dog in a small RV/camper with no slide-outs for five weeks was truly a test of love and endurance.

We didn't kill one another or even argue for that matter. Just enjoyed the closeness and learned to dance around one another while getting dressed or cooking or lounging.

I'm not sure I would want to do another long trip in that particular RV...something a bit roomier maybe.

As far as doing another trip out east to my favorite beach in all the world, well, I don't know if it will happen again.

One thing about getting old...the world of possibilities seems to shrink with every year. First of all there is the slowing of the engine, the aches and pains that make youthful activities a bit less enjoyable; then of course there's the shrinking finances - this trip was not cheap even though we stayed in our RV and cooked most of our own meals. The old Ford diesel was very thirsty.

I was ruminating on these thoughts while cleaning out the old Ford diesel pick-up this afternoon.

Vacuuming up the beach sand and potato chips on the floor of the truck, watching the sand get sucked up into the void like a memory fading into forgetfulness...was kind of sad and nostalgic and I wanted to save those grains of sand for some day when I need a beach fix.

The sand of Cape Cod is granite and quartz, grains of brown, tan, yellow, grey, pink, and clear crystal - large grains as beach sands go. Unique? Maybe not. But it's my sand and I love it. 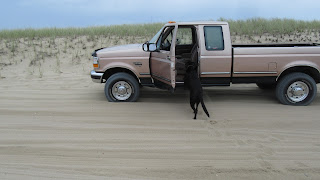 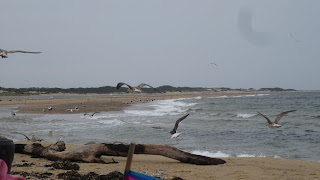 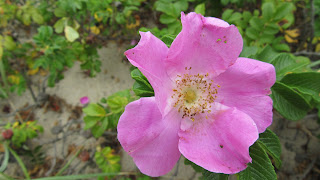 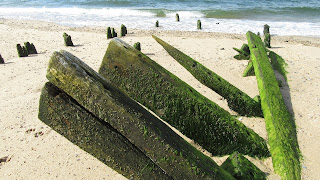 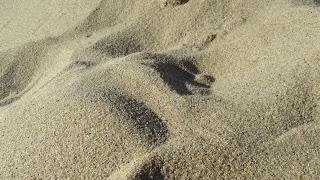 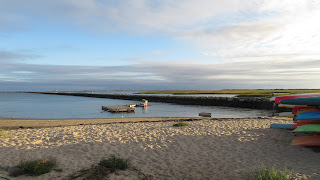 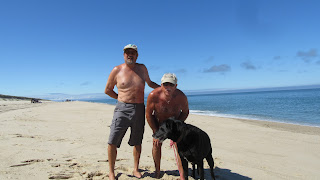 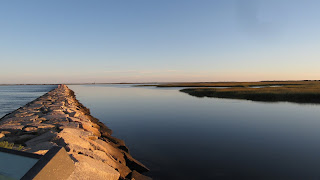 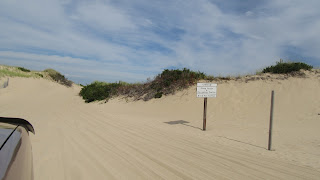 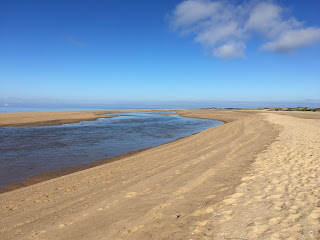 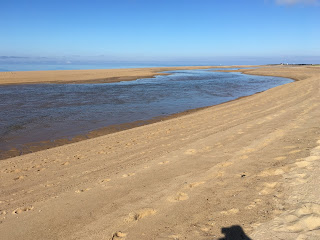 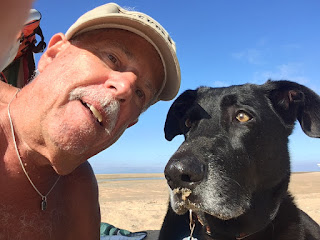 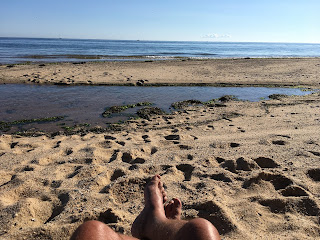 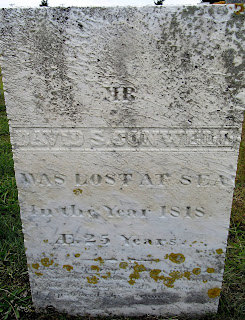