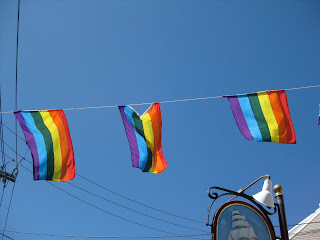 The SCOTUS decisions on Prop 8 and DOMA are historic, but they steps toward a goal that has not yet been reached. I have used the term bittersweet - and for some, those in marriage equality states, the recent ruling may be sweet; but for those in states without marriage equality the rulings have to leave a bitter taste and a realization that they/we have more work to do, hard work to do and more time to wait for results. For us, this is still not quite a "United" States.

Also, in light of the other Supreme Court decision this week that limits/restricts the historic Voting Rights Act, be aware of the possibility that in some unforeseen, unexpected way, expanded civil rights for LGBT's can be restricted by some future court ruling.

Here is an article from Back2Stonewall
Posted by Frank at 8:16 AM 1 comment:

Gay Pride Month "Out of the Closets - Voices of Gay Liberation" a review of sorts: Part 2 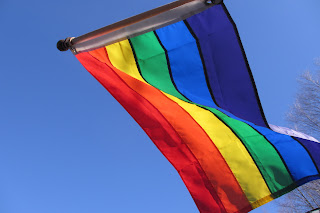 As we await the Supreme Court decisions on Prop 8 and DOMA we should be aware of how far we've come and that the struggle is not over.

From Out of the Closets, "My Soul Vanished From Sight: A California Saga of Gay Liberation" by Konstantin Berlandt
The bars are havens for that until-that-day crowd...
Limits: No dancing except in the back, no dancing close, no kissing. The bar is owned by a gay commune who work together to keep it open. Jim, one of the owners pulls Neil and me apart, "If you want to do that, go home and do it." Your kiss is obscene!
...
Outside on the street the men from the bar separate, no touching, thaey walk off  passing as straight men. The bedroom is a closet, the bar is a closet, the closet is a jail cell. You're let out if you can go straight, act straight, and don't get caught.


From Out of the Closets, "The Closet Syndrome" by Stuart Byron
From the beginning of the gay liberation movement, the Stonewall riots of June 1969, the Times and other elements of the mass media have misunderstood just how traumatic and new and courageous is "coming out." It is famous that the riots were covered in the Times on inside pages while at the same time - the very same time - front page attention was being given to some trees chopped down by vigilantes in a homosexual cruising area in Queens. In the perspective of events, of course, the paper was dead wrong: the Queens trees represent a minor incident in gay history; the Stonewall began a movement and an era.
Posted by Frank at 7:36 AM No comments:

Here is a very moving song by Ten Percent Review/Tom Wilson Weinberg*
with some of my own photos of Gay Pride and Rainbow flags. Remembering those who came before us and our own part in the struggle for equal rights.

*Just a note about Ten Percent Review: I bought their tape at a Gay Pride event back in the 1980's and I purchased the digital album recently. Their songs are fun, irreverent, political, and just plain gay.

I like their take on the Supreme Court and the Supremes: "Ain't no court supreme enough to keep me from my dreams".

And my favorite is the Wedding Song, "We had no wedding, no ceremony, no matrimony, we're just we"; which for many of us rings true - at least until recently in some states, and hopefully in all the US soon.
Posted by Frank at 8:24 PM 2 comments: 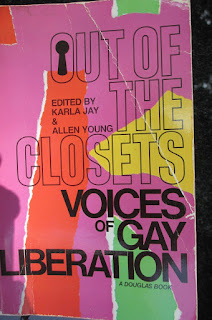 In celebration of Gay Pride, and to provide a bit of perspective on our collective gay history, I have decided to post a few quotes from a book I am reading called Out of the Closets, Voices of Gay Liberation copyright 1972 by Karla Jay and Allen Young, Editors. Published by Douglas Book Corporation. (Available on Amazon)

The book gives a historical perspective of the LGBT civil rights movement and is a series of snapshots written by a variety of authors each with a different viewpoint on the thought and struggle as it was in the late 1960's and early 70's.

I picked up the book last summer at the Provincetown United Methodist Church Thrift Shop - a great place to find some interesting books.

I am fascinated by Gay history and the Gay Lib era: such documentaries as Before Stonewall (unfortunately not currently available on Netflix) and books like Out of the Closets, provide important lessons that we should ensure get passed to future generations along with more recent and historical landmark changes and current progress being brought about by the marriage equality movement.

We have definitely come a long way since 1972. But there is, I think, something essential and valuable about Gay Liberation that has been lost or forgotten.  I have said this before in other essays and still believe in its validity: In some ways, the Gay Liberation movement was a radical experiment that was aborted by the AIDS Crisis.

The experiment was, I think, headed in a very different direction from the current path of marriage equality. Perhaps we would have eventually ended up exactly where we are now without the powerful influence of HIV/AIDS intervening - a twist in gay history that outed many individuals against their will and which brought homosexuality into the news and into the consciousness of the larger society.

HIV/AIDS ignited a new activism that had its roots in Gay Liberation - and in the earlier Civil Rights movement in which many gay and lesbian persons were involved and for which they felt a great affinity.

Historical events (philosophically we can debate whether they were random or inevitable events),  certainly have  conspired to bring us where we are today. In spite of the mainstreaming of the LGBT community - and I'm not convinced we have been entirely mainstreamed or that mainstreaming is what we would all prefer or want - we still experience the ignorance, hate and prejudice of those who do not understand us, who will not hear us, and who believe in their own moral superiority. We are in many ways still facing the same issues as the writers in Out of the Closets.

Marriage equality on a national level will certainly improve the legal status of our relationships but will not necessarily make us equal in the eyes of everyone on the planet. Look at the riots in France, the lawmakers in Uganda, the executions in Muslim nations, and at the discrimination by religious believers in the US - whether its brutal gay bashings and murder in Greenwich Village or the Catholic Church firing employees who marry a same gender partner or a bakery owner who refuses to sell a wedding cake to a same-gender couple. Our lived experience is discounted, ignored, devalued and ridiculed on a daily basis.

So here is  a bit of gay historical perspective: (I am quoting the following passages without permission of the authors under the "Fair Use" provision of copyright law)

From Out of the Closets: here's what Martha Shelly said in the chapter Gay is Good (originally published in Rat February 24,1970; copyright 1970 by Rat):

Understand this - that the worst part of being a homosexual is having to keep it a secret. Not the occasional murders by police or teenage queer-beaters, not the loss of jobs or the expulsion from schools or dishonorable discharges - but the daily knowledge that what you are is so awful that it cannot be revealed. The violence against us is sporadic. Most of us are not affectd. But the internal violence of being made to carry - or choosing to carry - the load of your straight society's unconscious guilt - this is what tears us apart, what makes us want to stand up in the offices, in the factories and schools, and shout out our true identities.

We were rebels from our earliest days - somewhere, maybe just about the time we started to go to school, we rejected straight society - unconsciously...The homosexuals who hide, who play it straight, or pretend that the issue of homosexuality is unimportant, are only hiding the truth from themselves. They are trying to become a part of a society that they rejected instinctively when they were five years old, to pretend it is the result of heredity, or a bad mother, or anything but a gut reaction of nausea against the roles forced on us.

From Out of the Closets: here's what Charles P. Thorp has to say in a chapter called I.D., Leadership and Violence from a keynote speech for the National Students' Liberation front Conference, San Francisco, August 21, 1970:

We have come to see that it is the fairies, faggots queens, etc. that were, through their blatentness (sic), the first to challenge the system.  In essence they were saying they had a right to be Super-Gay because Blatent (sic) is Beautiful We also know that it will not be until what straights call "blatent (sic) behavior is accepted with respect that we are in any sense, any of us, free. For it is Blatent (sic) Faggotry that they really hate. We are all blatent (sic), unless we're ashamed of being Gay and this is why we are all hated.

We may be liberated, we may be out and proud, we may be mainstreamed and married, but we mustn't let our guard down. We mustn't be complacent. Don't mistake lip service and legal protections for acceptance (not to say that acceptance is our goal) or tolerance for understanding, or acceptance for love, because the truth is that straight folk, even the most liberal and progressive, don't really "get it", don't really get us.

Happily, many youngsters are finding the courage at a young age to come out and to shout out their true identities; unfortunately many others who live under still oppressive cultural and religious beliefs see suicide as their only option. This is unacceptable and those institutions and individuals who persist in demonizing LGBT individuals and our sexuality must be held accountable for taking innocent lives.