An Early Taste of Winter

Actually it's more like a full course meal. Ice, snow, wind, shoveling, scraping, hats, gloves, coats and boots. This is why we left Connecticut. The State of New Mexico had us believe that this wintery stuff stays in the mountains and ski areas. Major deception. We thought last winter was a fluke. Apparently not. And it's only October.

Our first year here we had Thanksgiving dinner outdoors in the sunshine and warmth and I picked tomatoes for the salad. We thought that would be the norm...

Hopefully we'll be in shorts and t-shirts next week.

(I don't know if it's blogger or YouTube but you can't open the video to full screen. Anyone know how to fix that? Also Blogger is VERY quirky on Safari, I now have to use Firefox to do anything right) 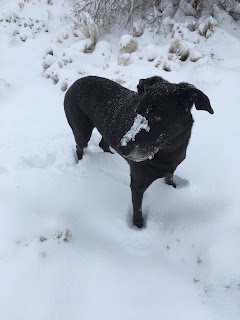 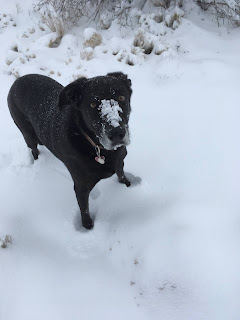 We spent most of the day getting ready for a winter storm. We are expecting freezing temperatures along with rain and snow. So we had to take in the potted plants, take down the sun shade over the deck, clean the gutters (Leon’s job) and clean up.
Not how we planned to spend our Anniversary.
But after all the chores were done I picked up on plan one: a nice dinner for two.
Restaurants are out of bounds of course so I cooked all day Thursday and Saturday.
Made homemade ravioli and tomato sauce with meatballs, sausages, roasted pork. A little antipasto, bread, cheese and wine.
We are talking a break right now before going for dessert - almond biscotti and decaf.
Beats the Olive Garden by a mile.
The thing is that after thirty-two years Leon just expects nothing less. 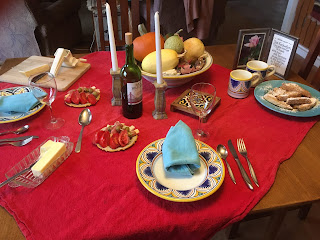 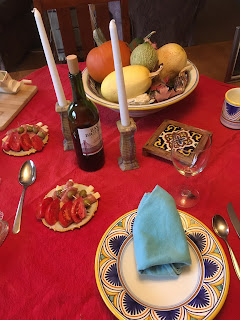 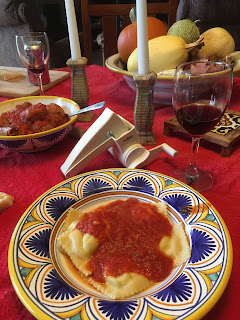 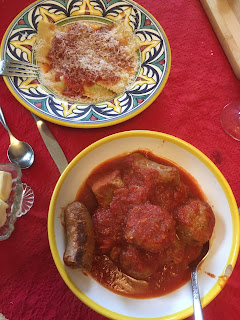 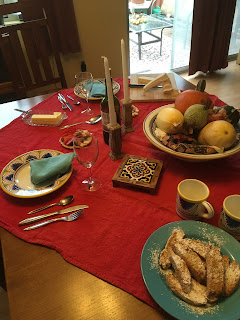 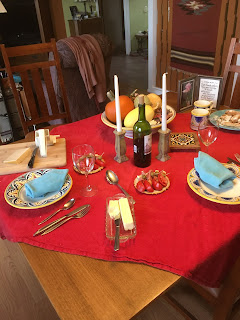 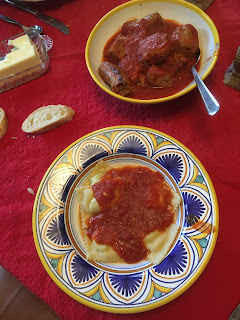 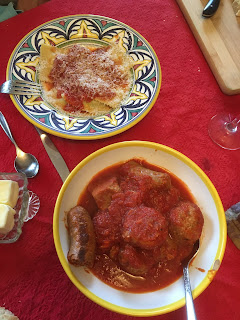 A Different Kind of October Suprise

Took a walk down in the Bosque along the Rio Grande this afternoon. What a perfectly glorious day. 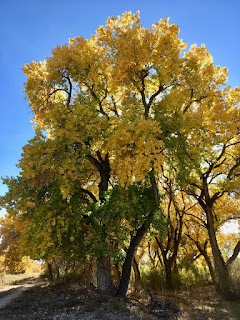 Despite the fact that I live with chronic insomnia and fight depression often, today I was in an exceptionally good mood. I made banana-blueberry muffins this morning and to hell with insomnia, I had a cappuccino to go with one for my coffee break.

The most excitement we've had during the pandemic occurred this past Wednesday.

Our dog Benni went out the garage door on Wednesday morning around 6:00am when Leon pulled out to go to work.

He just never does that so when I smelled a skunk I announced to Benni who is usually sleeping in the bedroom at that hour, "Benni, don't go outside there's a skunk."

I got no response and went through the house, bedroom, guest room, kitchen, garage and back deck looking for Benni. Then I opened the front door and there he was, standing there.

But I was still in denial, thinking perhaps someone had run over Pepé Le Pew whose body was oozing skunk smell out in the street.

So I let Benni in. The skunk smell was still lingering so I went outside. It was strong. I came in and it seemed like it was stronger in the living room…and the bedroom...
To make a long story longer...it FINALLY dawned on me that Benni got skunked. Amazing what living in denial can do.
Well everything came to halt while I got the peroxide, baking soda and dish soap to treat the problem. It did some good but Benni was moping around all day feeling defeated.
I told him that that was a lesson he was supposed to learn as a young dog, not now in his senior years.
Three, four, five days later the odor lingers slightly on his head and neck but is gone for the most part.
Photos: Down in the Bosque near the Rio Grande in Pena Blanca (near Cochiti) this afternoon. Cottonwood trees. Benni went in the water and the skunk smell seemed to get worse. Oh well.
The Maple leaves were at 4th of July Canyon State Park in Cibiloa National Forest, NM. 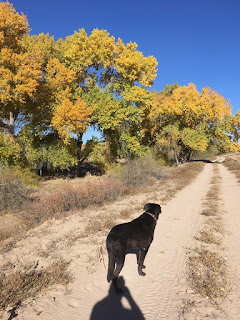 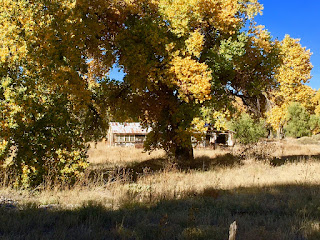 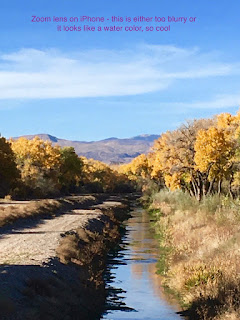 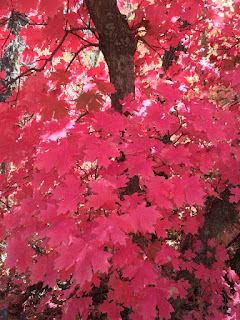