I don't shop often and almost never at Kohl's Department Store - except when they send me a coupon for $10. They do this with no strings attached, about 3 or 4 times each year. Then I usually go there and browse the clearance rack to find something to spend my ten dollars on.

Recently my 20 year old Swiss Army Victorinox watch stopped running and I had some batteries that I bought last time my watch went dead. I guess either the batteries are no good or the watch is no good. And, well, it could be expensive either way.

But today I got lucky. Kohl's had watches on sale. I looked at the Timex models but man have they gone up in price. I found a nice looking off-brand watch that laughably says "Diamond" on the face. The regular price: $19.99. Right in my price range. At the checkout it rang up for the sale price of $12.99. After applying my $10 coupon and state sales tax I paid a whopping $3.18. Probably less than a battery. Hope it lasts at least a year. 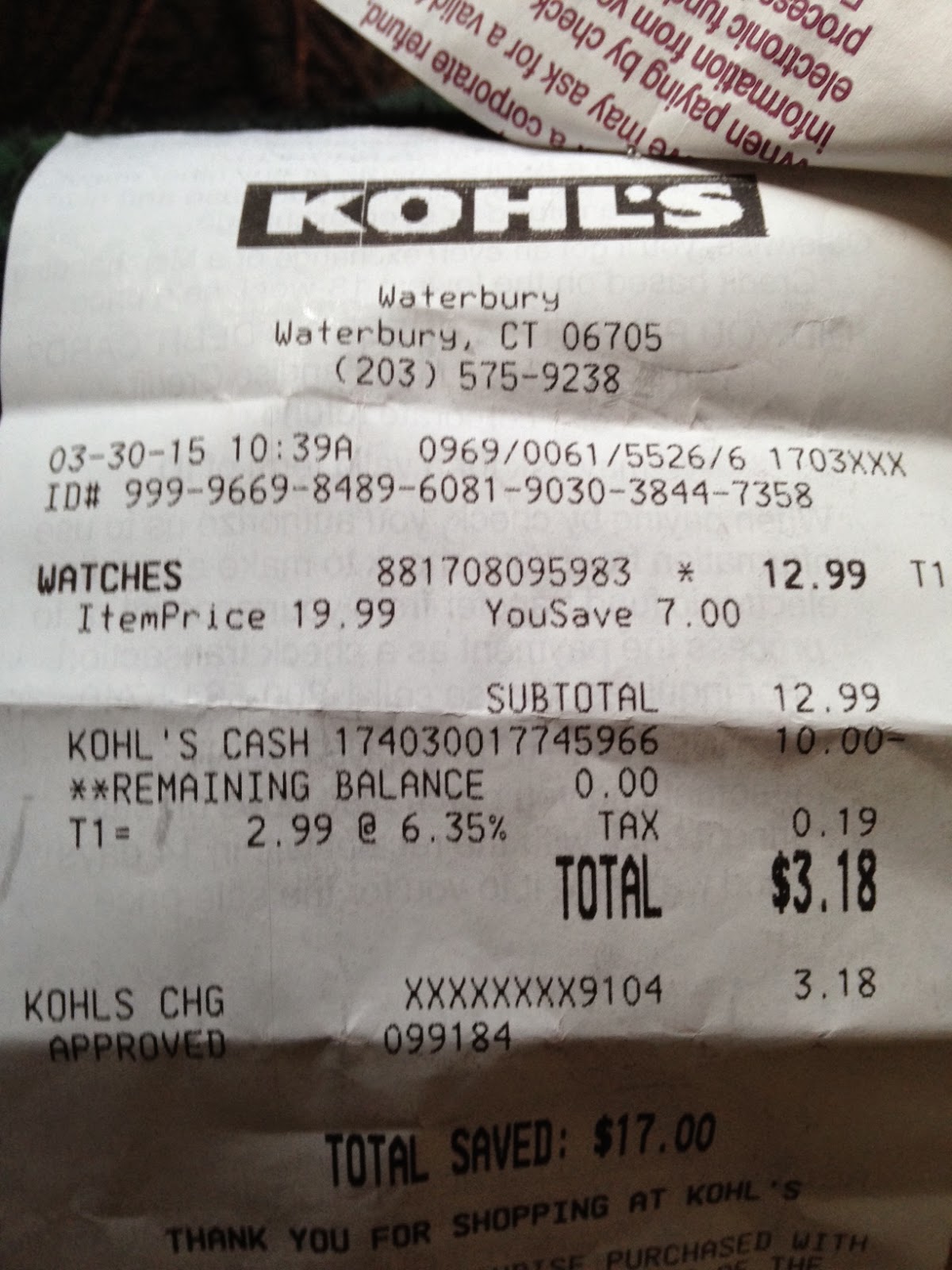 And later, at Costco, where we went for lunch (Leon had the $1.49 hot dog and soda combo, I splurged for the $2.49 sausage with pepper and onion on a roll) I saw a watch I didn't buy: 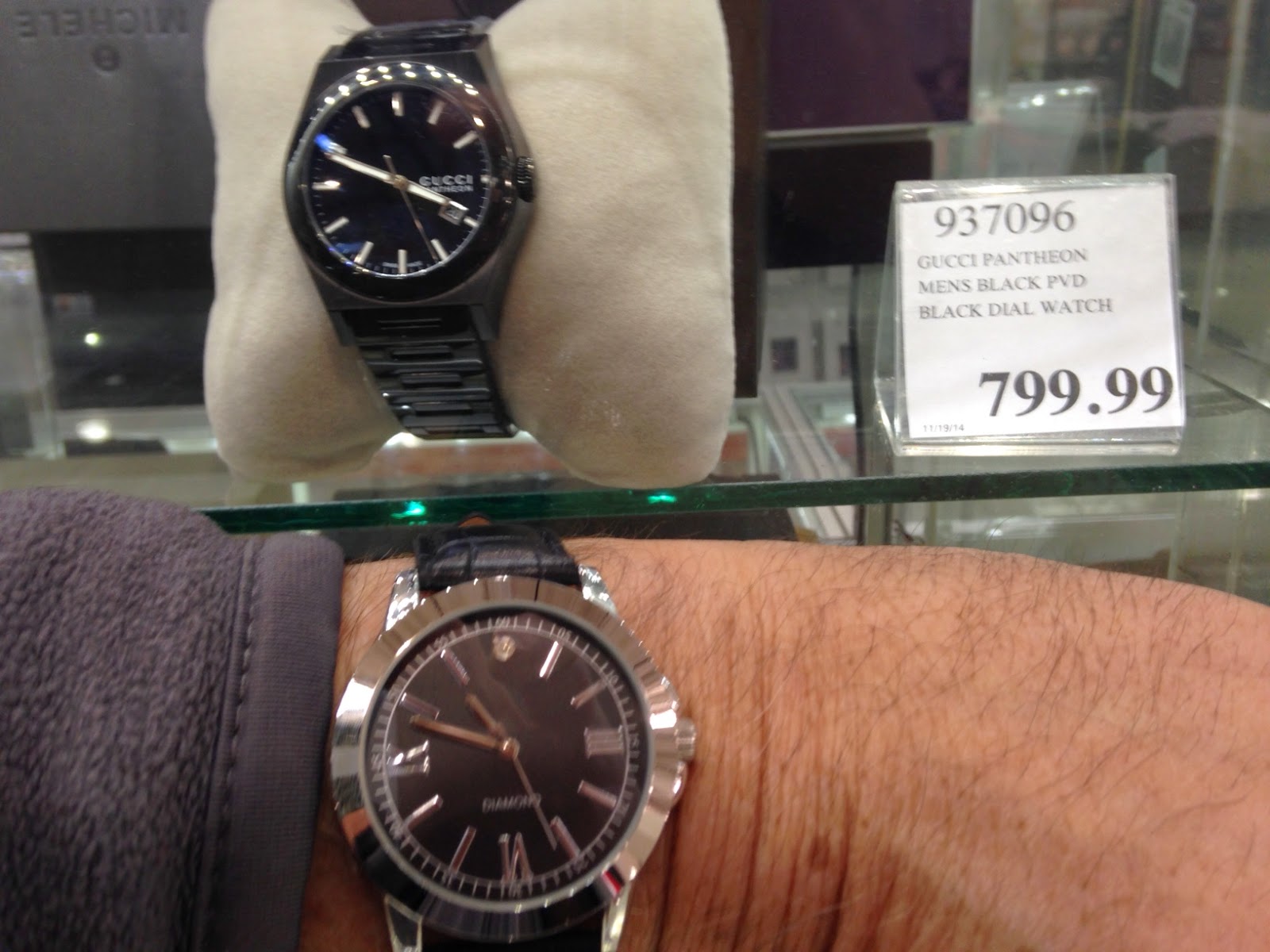 I think mine is prettier.

And then I saw the other watch I didn't buy: 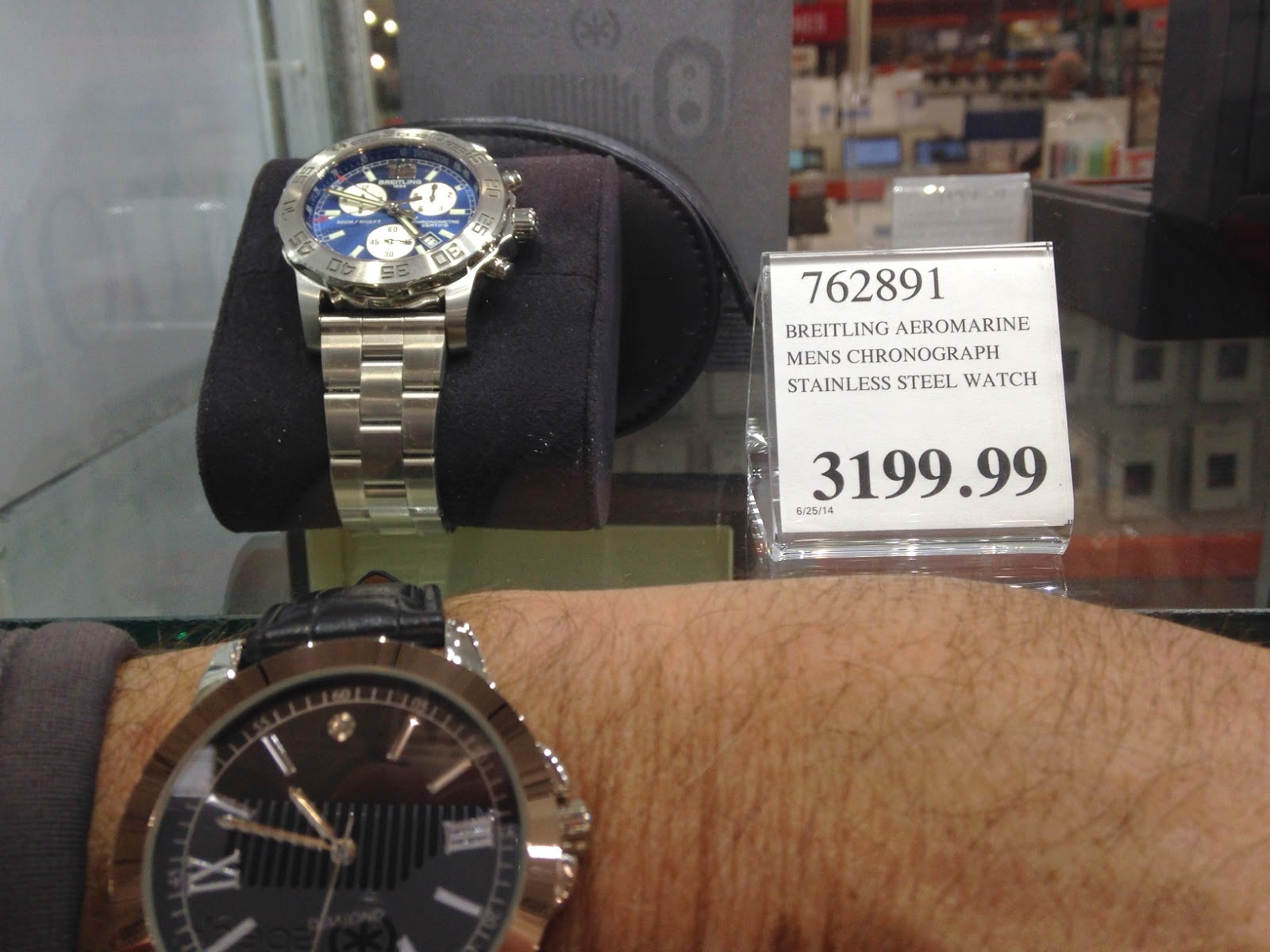 Mine is also stainless steel, but has a faux leather wrist band instead of the pretty expandable. And it has Roman numerals and no pretty dials showing the day and month and whatever. My phone does that.

But Is There A Vaccine?

This explains a lot about how we are all becoming infected by internet viruses - and I don't mean the ordinary "computer" viruses that McAfee and Norton can fight off.

I found this little video to be an interesting demonstration of how we can be influenced and manipulated by ideas and ideologies and by our own emotions and biases; and it explains, in part, why we, as humans feeding on the internet for information, are so polarized.

I Could NOT Watch The Video

A young gay person was recently stoned to death in Jamaica. This is beyond uncivilized. Story and video here. And gay men are beheaded, thrown off buildings, or arrested and persecuted in Iraq and Iran, Russia, Uganda and elsewhere.

All in the name of God, Allah, Christianity, Islam, the bible and religion, of course - as is the backlash against the LGBT community here in the US.
Posted by Frank at 8:08 PM 1 comment:

An Excerpt From the Afterword 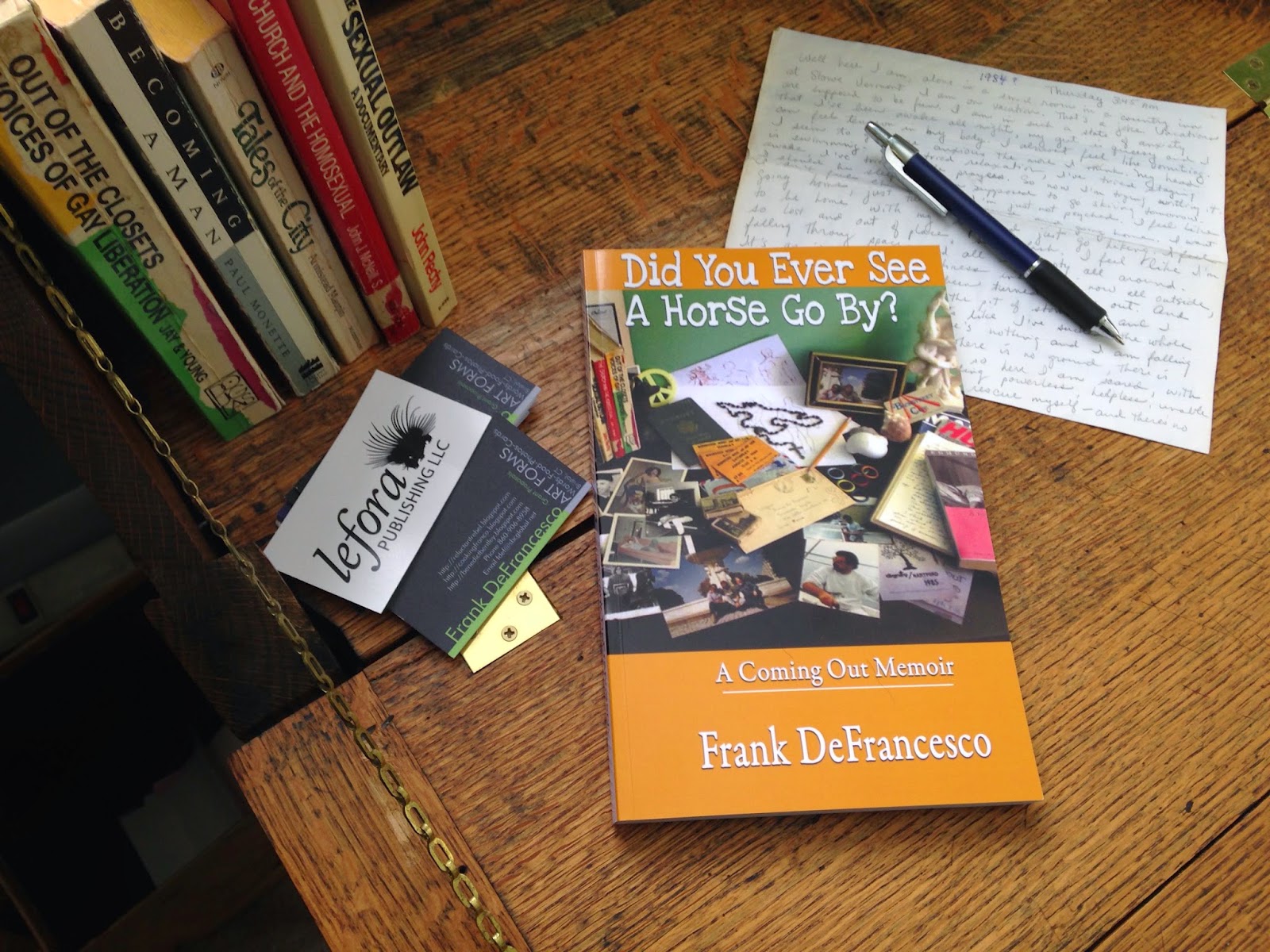 Peter, the friend to whom I addressed the Preface, died from complications of AIDS, like too many other people I have known. I never finished composing that letter to him in 1987 and so it was never sent. Here, many years later, I include an Afterword, addressed to him.

I’ve somehow survived to 2014. I am old—or pretty nearly old as life journeys go. In the grand scheme of things, I am nobody and my life is irrelevant. So why should my story, my experiences beginning more than half a century ago, matter to anyone? Why should I bother to write down these snippets of my life?

The answer to that last question: I had to write this account, even if no one ever reads it, because I was compelled to do so in the same way as I was compelled to come out; it was a matter of survival. And if I am to live any semblance of an authentic life, I must come out unreservedly and often; because coming out is never only an event: it is a continuous process and one that challenges me daily.

• The woman who cuts my hair when I’m visiting in South Carolina insists on making small talk and asks about my wife. She has scissors. How do I respond?

• At the auto repair shop, I tell the service tech, who I’ve just overheard making a homophobic comment, “If there’s a problem, call Lee, my, uh, friend? roommate? partner? significant other? husband?”

• Lee and I are holding hands on a deserted beach at sunset as some college kids approach in the distance. Do I let go of his hand?

Ann Bancroft as Ma Beckoff scolded Harvey Fierstein’s Arnold in Torch Song Trilogy: “You haven’t spoken one sentence since I got here,” she says indignantly, “without the word gay in it.” How often do I check myself so as not to offend the likes of all the Ma Beckoffs in the world with constant gay references?

• I am challenged daily to come out, again and again and again, because, even as things appear to be changing, there still exist subtle and pervasive societal and cultural norms that are intended to usher us back into our closets: the veiled but insidious beliefs, behaviors, words, and hatred that are still widely tolerated.

• I am challenged to come out, again and again and again, because of the hate and vitriol and rage that seem to escalate in response to every equal rights victory and with every courageous individual who comes out and who refuses to remain silent and invisible.

• I am challenged to come out, again and again and again, because too many gay kids still choose suicide as their only option to escape bullying and familial rejection; because some lawmakers still introduce bills that would take back our hard won rights and liberties; because some religions still wave signs declaring that “God hates fags” while others, less blatant, use more refined and educated language to condemn and vilify us.

Labels: Book, Did You Ever See A Horse Go By?, From the File Cabinet, Personal

Sometimes Humor Is The Best Response

All the terrible things that happen since the "gays got married" here:

Google to rank websites on basis of trustworthiness.
This may counter the anti-science and those who confuse opinions with facts.
I think all websites, articles, information should also be dated. Nothing like looking for information about something time sensitive and finding only articles that are 10 years old.
Posted by Frank at 5:49 PM 3 comments:

Link:
Malcolm Boyd, a pioneer for LGBT rights and an Episcopal priest, has passed away at the age of 91. If anyone is interested in LGBT history and those who have made our lives today what they are, I suggest you know about those who paved the way. Malcolm Boyd was one.
Posted by Frank at 9:10 AM 2 comments: