I just couldn't resist posting this. It's the first time our so-called president has made me laugh.

For What It's Worth - Go Ask Alice

I am not going to take a lot of time here to critique or defend Chuck Todd or Brian Tyler Cohen except to say that we are in vastly new territory when a a president of the United States  can make blatantly vicious accusations and speak outright lies as though they are truths and expect his words to be broadcast far and wide over every TV network and cable news station.

The issue is not whether the particular statement is newsworthy...the issue is that as president of these United States his words, once out of his mouth, truth or falsehoods, have real consequences and take on a reality of their own. He understands that his lies, even when they are fact-checked by multiple sources beyond any doubt, have already had the desired effect. It is an insidious tactic of a disingenuous narcissistic gaslighter - a person who, if he had ever been seriously vetted, would never have been a candidate, let alone a president.

"All the news that's fit to print" may still be a standard...it's just that much of what this president spews may no longer be deemed "fit to print" by a particular news outlet.

News organizations make choices daily about what news they will cover or report on. Freedom of the press ultimately involves making choices about what to report or not report and how to do so as well as editorializing.

In any previous reality, this all would likely not be an issue, but this current POTUS has catapulted us into a world where nothing is real, where there are "alternative facts" where science is considered an opinion, where truth no longer has meaning, where civility is not a virtue, where lies are equated with fact, and where words can incite violence. Should the president's vile language and insidious lies be given equal weight as a factual event?

This is new territory for us as well as for responsible news media. How does one report what is newsworthy without becoming a party to an intentional strategy of misleading and manipulating the citizens of this country?

What is "fit to print" or fit to broadcast. Should a video of a murder be broadcast because it is "news"?

We are in new territory and we are all learning how to navigate our way amongst the land mines and in a world where all the rules have changed or been discarded. I certainly don't have the roadmap nor the answers. But I do know that something must be done differently in order for all of us to return to some semblance of sanity and reason.

When Ellen DeGeneras can be severely criticized for being civil to George W. Bush and even more harshly castigated for her standing for her value of kindness...go ask Alice...


In related "news" see this link to Back 2 Stonewall
Posted by Frank at 1:09 PM 1 comment:

I purposely haven't been too political on this blog of late, but this, I think, deserves a post (even if you are not a big fan of Chuck Todd. Personally I think he is pretty good.)

Also, the video is a commentary by Brian Tyler Cohen which starts after the 1:30 mark.

Insomnia Bread: The Upside of a Sleepless Night

I’ve been having difficulty sleeping for longer than I can remember. The main reason seems to be a nagging discomfort when in a horizontal position. Every once in a while I get up and  make bread dough.

Which is what I did Tuesday night (Wednesday morning) at 2 AM.

I let the dough rise overnight in the fridge; took it out of the fridge around noon on Wednesday. Let it get to room temperature. Shaped it into rolls and one large loaf and let it rise again. Baked it at 425° and this is what I got.

I tell people there is no good Italian bread in New Mexico except of course at our house. 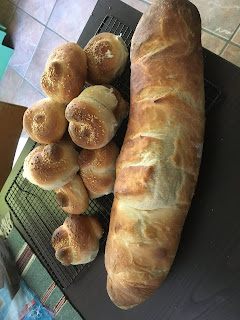 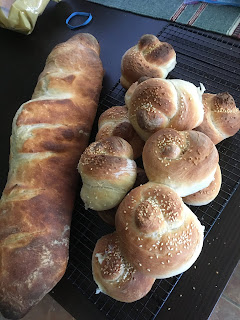 If You Like Happy Endings and Need A Break From Reality

Saw the Downton Abby movie this week. This was maybe the 4th or 5th movie I've seen in a theatre in four years...worth the trip.

If you watched the series on PBS, it was like coming home to see old friends.

I'm not sure how a liberal, working class, anti-oligarchy old guy like me can come to actually like the English aristocrats in Downton Abby but...well, their servants seem to like them pretty well. So I'm in good company. Recommended.