Needing a Hearing Aide? or Recently on Netflix

Let me begin by saying that I'm likely to be a good candidate for some kind of hearing aide soon. I've noticed a problem, especially when watching certain TV programs.

Voices range from easily understandable to impossible to decipher. Usually I get a few words, then miss the four or five words that would convey the meaning of the sentence, come-back or joke. Some womens' voices are most difficult, perhaps because of the high pitch. Increasing the volume doesn't always help.

Among the impossible to understand are Megan Mulally on Will and Grace, Melissa Rauch on Big Bang Theory, and Minnie Driver on Speechless. I'm also having trouble with Modern Family and New Amsterdam (with the irritating background music/noise). Most of the time I just give up, turn to my computer for entertainment while Leon watches the shows (which we record on TiVo so we can skip all the commercials and watch a 30-minute show in 20).

When English, Scottish, Australian or similar accents are involved, (Minnie Driver among others) it is so much more difficult to understand. (See recent review of Deep Water - a great drama but I had to have closed captions on in order to follow the story).

So last evening we watched Outlaw King on Netflix.

Otherwise I found the story difficult to follow, 1) because it was difficult to understand the actors' speech and 2) I couldn't always figure out who were the English, who were the Scots on the side of Robert the Bruce and which ones were his rivals; or who was fighting whom.

I wondered how the Scots and the English distinguished who to impale with a sword in the chaos of battle. I also wondered how they filmed the many horses going down, hopefully without harming a single one. Unless you are a great fan of Medieval English/Scottish history, this one may not be worth spending two hours watching - not even for the few seconds of Chris Pine naked.

We got through it. Leon did not give it great reviews either.

In the total opposite direction is Kominsky Method, a Netflix series starring Michael Douglas and Alan Arkin. It is smart, warm, funny and entertaining. Someone called it Frankie and Grace for guys.

Looking forward to seeing the rest of the series. Recommended.

Anyone who knows me, knows that Christmas is not my favorite holiday...for reasons I won't go into.

But we usually do a little holiday decoration here and there: lights mostly, some greens, a ceramic tree that Leon's had for ages, a couple of stockings by the fireplace and a little one-piece sculpted nativity scene.

I heard that anyone with a saw and $10 could get a permit to cut a tree in the National Forest here in New Mexico.

So, in an effort to do my part in the monumental job of forest management, I decided that we (Leon and I and two of our friends) should go on a tree hunting expedition. I wasn't in it so much for the tree as for the day out and a little adventure. 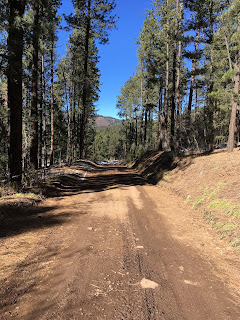 When we stopped at the ranger station to get our permit, I paid our $10, got a map and informed the clerk/ranger that I had, unfortunately, forgotten to bring along a rake (like in Finland?). She smiled and said, no problem.

So we were off into the Pecos woods in the Ford pickup, through snow and mud (sorry for all that mud on your truck, Leon), in search of a worthy tree. 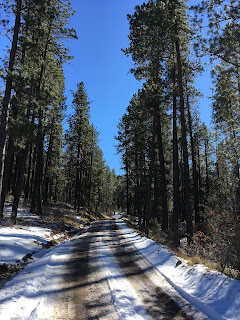 The pines are nice, but way too big, and not right for a Christmas tree. 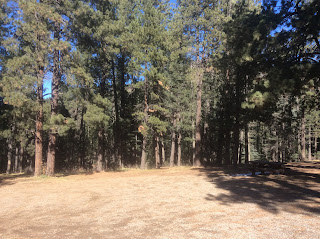 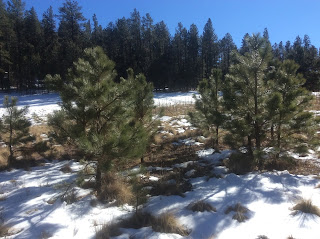 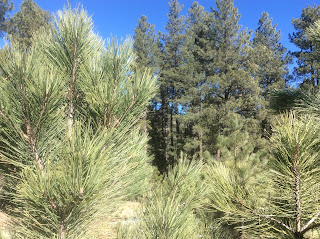 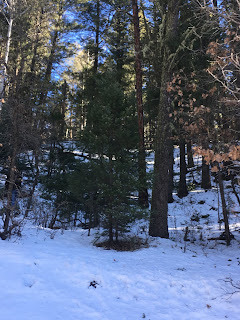 Maybe we didn't drive far enough up the mountain because the trees were not really great specimens for   holiday decorating. Plenty of pines but nothing like a Douglas Fir or spruce. Not sure what type of evergreen we were finding but here is what we got. (I probably wouldn't have paid $10 for it at the corner gas station, but the getting it was worth the price). 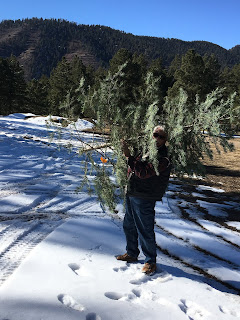 This wasn't the first for us: see here, and here. 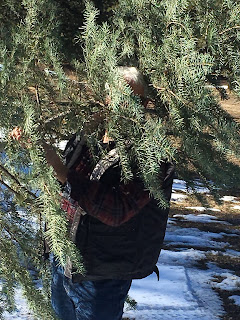 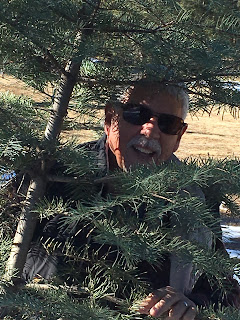 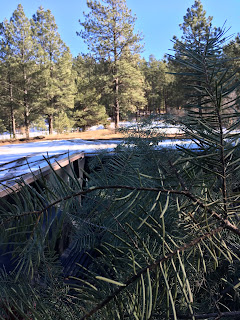 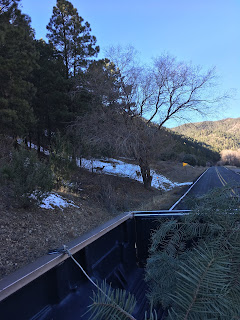 It will go out in the courtyard for the season. I'm not sure if it is even strong enough to hold a string of lights.

Well, it's not the Rockefeller Plaza tree, but it was a fun day out and we all stopped for a late lunch on the way home. Just enjoyed the ride and the company. And, well, forest management, you know.

I AM SO FED UP WITH THE LACK OF ACTION BY CONGRESS AND THE ADMINISTRATION TO DO SOMETHING TO STOP THIS MADNESS AND CONTROL THE ACCESS TO GUNS.

NOT TO MENTION THE FUCKING PRESIDENT'S RESPONSE TO THESE SENSLESS ACTS OF VIOLENCE...ALWAYS BLAMING THE VICTIMS. I CAN'T WAIT TO SEE HIM BEHIND BARS.

Two Netflix Choices - Not Exactly "Popcorn" Worthy, But Worth Watching

Need some relief from politics and not looking forward to all the Black Friday advertising? Try a couple of Netflix documentaries. Not ones I'd pop corn for...but be my guest and go for the popcorn if you like. Enjoy!

Packed In A Trunk - The Lost Art of Edith Lake Wilkenson

The Untold Tales of Armistead Maupin