Had a busy but enjoyable day.  It was sunny and pleasant - on the cool side most of the day.  Brought Benni to the Dog Park this morning, then Leon and I stopped at the Coffee Cup for lunch. 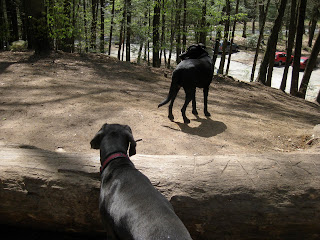 Back home I spent the afternoon in quiet solitude, mixing soil for the planters and filling them and  mending the stone wall. Occasionally throwing a stick for the dog to fetch.  I can spend hours playing with dirt and rocks and plants and never feel deprived of social interaction.
In many respects I prefer my solitary activities to the company of people.   Leon was in the house doing his thing and I was outside doing mine.  It was nice just knowing he was there.  Somehow it keeps me grounded and centered and content. 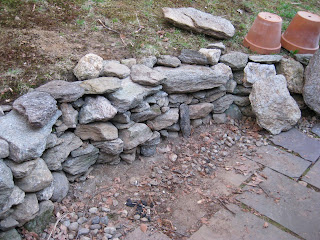 The yard is my work in progress - a section of the stone wall that I originally designed as a bench seat was too low to be a bench so I decided to re-do it to blend in with the rest of the wall.  It was was work and when I was done I was a bit sore and tired but I actually felt better than I do when I've been writing grants for hours at the computer.

In our neck of the wood there are not too many dangers in nature.  An occasional black bear or a coyote but they don't usually cause trouble.

I think we have a bobcat on our property because I saw tracks in the snow during winter and now I've been finding carcasses of opossums and birds.  The other night about 4:30 am we heard a very strange animal noise.  A cross between a screech and bark and cry - once ever 5 seconds or so for nearly an hour.  The link is to the audio of a Canada Lynx (lynx canadensis) which sounds very much like what we heard.  Supposedly there are no lynx in Connecticut but there are Bobcats (lynx rufus) in Connecticut.  They prey on small mammals and probably would leave Benni alone - I hope.

This big spider however scares me.  Doesn't it look like it's poisonous? I don't know much about spiders, so looked it up: it's a Dolomedes tenebrous, Not poisonous. But it still scares me. 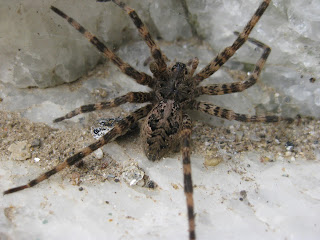 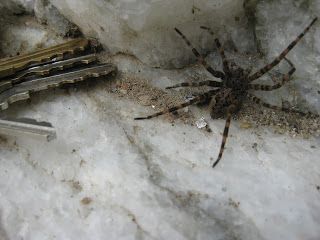 Ticks are probably the most dangerous things in the woods around here - they carry Lyme disease and other nasty illnesses. And mosquitos with West Nile virus are also a creature which presents a danger out of all proportion to their size.

There are rattle snakes and copperheads out there - but they are rare and reclusive.  Walking the city streets around these parts is probably more dangerous than a walk in the woods could ever be.

Meanwhile the prickly pear are coming out of dormancy and starting to perk up.  As am I. 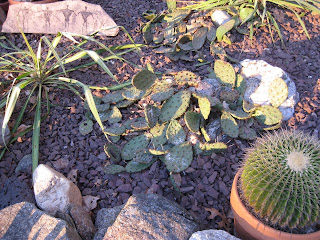 Leon and I had the pleasure of seeing/hearing a Young @ Heart Concert this evening, thanks to a generous gift of free tickets provided by the Director of Development and a board member of the company I do grant work for.

These seniors from Northampton, Massachusetts are pretty gutsy and talented folks, a few walking up to the mike with a cane to do solos.  The group does song and even a bit of dance.  Many of the tunes are pop and rock songs of the 60's.

Their renditions give the words to many old songs a slightly different nuance:  "Staying Alive" for one, takes on a whole new meaning!

They have done concerts all over the US and in Japan, Australia and Europe.  Check them out if they perform in your town.  While their voices may not be perfect pitch,  their enthusiasm and spirit are inspiring.
Posted by Frank at 12:03 AM 1 comment:

In Memory of Phoebe

Connected to the Past

Despite having "Lost the Faith" there are some things that keep me connected, if not to faith, to religious holidays.

Food, in particular.  I cannot help myself.

So over at Dinner's Ready I have posted two of my traditional Italian  Easter recipes: Pizza di Pasqua (or Pizza Rustica) and Easter Bread.

Is it just me, or does anyone else get that same creepy feeling when listening to either Charlie Sheen or Donald Trump?
Posted by Frank at 2:23 PM 2 comments:

Autumn has its colors and pumpkins and apple pie.  Winter, with its beautiful snow makes one appreciate spring.  Spring is delightful, watching the snowdrops blossom and the daffodils and tulips poking through; the Robins and the Crows and the Mockingbirds making noise. 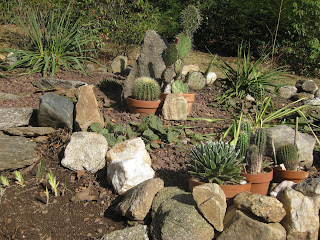 They don't seem to have many chores to do - unlike us humans, who spend inordinate amounts of time putting summer away and dragging it all out again. 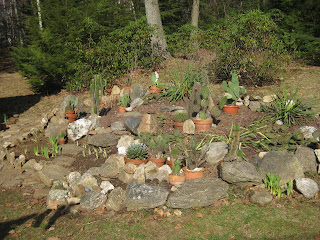 Like hauling the cactus plants out to the rock garden.  I spent two days cleaning out the debris of winter, re-arranging rocks, and putting out the cactuses (my spell checker allowed this one).  Sometimes I wonder why I keep these prickly creatures - though the collection is smaller than it used to be.  I've tried selling them; I've tried donating them.  I think they'd make a nice display at some Mexican restaurant or museum greenhouse.  But I can't seem to just let them freeze to death.
The garden has been Roto-tilled and half the fencing is in place.  The stone wall needs some remodeling and vegetable planting is still a few weeks away. 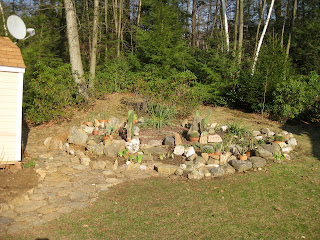 Why is it when I was working in an office job, chained to a desk from 8:30 am to 4:30 pm Monday through Friday, a day was so long and a week took forever?  At 8:30 I couldn't wait until 4:30 and on Monday morning I couldn't wait until Friday afternoon.  And the stretch from one vacation to the next was an eternity.

Now, semi-retired and working (occasionally) from home, the days evaporate like morning dew and the weeks breeze by like a drive in the country.

The LAST Patch of Snow on Fall Mountain

Hopefully when this melts TODAY we'll have seen the last of this form of nature's beauty for eight or nine months. 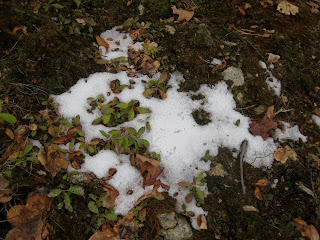 Republicans are Just Too Despicable

I don't often do "political" commentary, but this is one of those occasions.

The Republicans in Congress are just too despicable for words.  Their tactics are nothing short of extortion, holding America hostage to their narrow minded religious ideology and their dangerous objective of destroying any and all government programs that serve ordinary people and the poor.   Yet they insisted on keeping tax cuts for the wealthy - tax cuts that just about every sane and reasonable person views as not only illogical, but counter-productive.

What is so difficult about balancing a budget: it takes both spending cuts and increasing revenue.  The Republicans want to do it only by cutting spending.  It doesn't work.

When you think how the wealthy not only get richer by the minute off the backs of the working poor and middle classes (whoever they are) and are also siphoning off wealth/dollars from the general economy, it is no wonder that there's not enough cash to run the country.  Couple that with the Bush era spending on war - spending that did not go into our economy but instead drained it,  it's no wonder there's no money to run the country.

The wealth  of the super-wealthy for the most part contributes nothing to the economy - they're certainly not spending it at "Mom and Pop" stores, at Sears, or in any significant amounts on American goods and services.  They "amass wealth" and "amass more wealth" but put nothing back.

Even a child playing Monopoly (if they still do) can tell you that if one player gets all the money and all the property the game is OVER - everyone loses.  There's no more fun to be had.  The real object of Monopoly is that the game goes on and on.  Taking all the money is subversive.

And the super-wealthy in these times are more than greedy, they are truly subversive.  And the Republicans are like ass-kissers hoping to get their payoff from these untouchables - those who, no matter how bad things get - never get touched by hard times.  The Republicans are deluded and delusional.  They are too despicable for words and just as subversive.

May they get their just rewards.
Posted by Frank at 7:12 PM 4 comments: 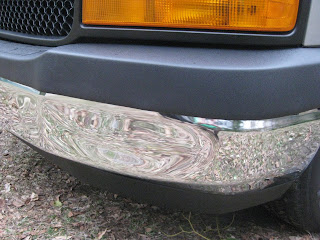 I've always characterized Insurance as "legal organized crime".  You know it is "legal" and "organized" and, I assert, it is about as close to "criminal" as you can get without there being a recognizable "crime".

Think about it.  If you own a car, insurance is one of a few products you are required by law to purchase.  And it is  also probably the only product, once purchased, you must avoid actually "using" as intended, lest you be punished.  Your punishment will be either withdrawal of the product by the company ("You're Canceled"), increased premiums (We're Raising Your Rates"), or some other other industry devised reprisals ("We Will Be Auditing Your Claims" ; "We Are Placing You Into A Special Risk Category"; "Don't Even THINK About It").

What makes this so frustrating is that my hubby spent over a week doing a very difficult, backbreaking clean-up job for a customer.  It involved over 30 dump runs - 16 tons - of trash and debris left on a property. 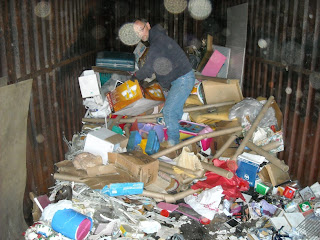 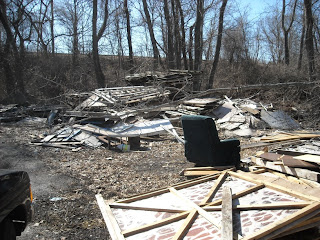 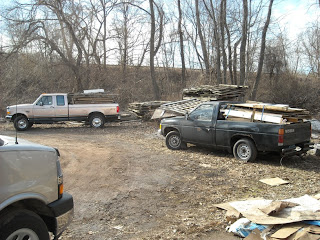 Then, someone backed into his work van when it was parked overnight.  (You must know that Leon is compulsive about this vehicles - keeps them in pristine condition, so this was a real blow.)

The probable suspect denies fault and there were no witnesses.  So Leon called our insurance agent at State Farm.  Now, we've always felt that State Farm is one of the better companies out there.  But he was told that because we had another claim within the past year (when my Mazda got totaled) it would be prudent to pay out of pocket for the repair, unless it is $1,000 or more. 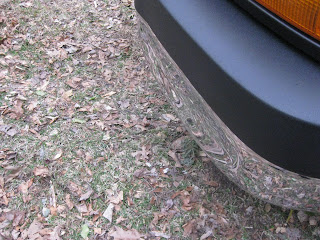 The dent doesn't look like much but the Chevy repair shop estimate is $900 give or take, and if the frame is bent, it could be $1,500 or more.  It is over a week's work - out the window.  Most of what Leon earned will go to repair the van.  And we're told to be wary of making an insurance claim.  We'll be flagged.  We'll be punished.  Even though we have guaranteed renewal - the rates will be so high we won't want to renew.  Use your insurance as intended and you WILL REGRET IT. 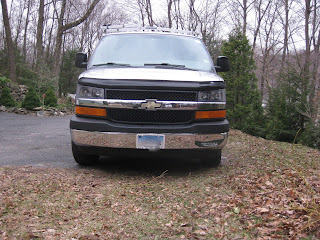 And I haven't even mentioned HEALTH INSURANCE.
Posted by Frank at 7:45 PM 7 comments: