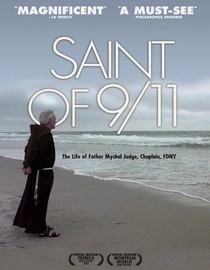 Last evening, after some of the company left, Leon, my sister and I watched Saint of 9/11 on Netflix.  I knew Father Mychal Judge was a gay man and I had this documentary in the queue for some time.  Last evening seemed like a good time to view it and I wanted my sister to see it too.

The documentary was quite moving and, despite the limited available historical footage, this film presented a snapshot of a courageous and loving Franciscan Friar who, as a chaplain to the New York Fire Department, was killed in the attacks on the Twin Towers in New York City on September 11, 2001.

The film had me shedding a few quiet tears at several points, especially when it documented Fr. Mychal's service to persons with AIDS and to the gay community and the expulsion of the Dignity Community from Church buildings during the "reign" of John Paul II, under the influence of Cardinal Ratzinger, now Benedict XVI.

This historical moment was one shared in many communities across America, including Hartford, Connecticut.  The edict of October 1, 1986 and is aftermath was, for me, the fatal blow, the final insult, the ultimate abuse, that pushed me out the door of the church (and soured my taste for any religions). (See other posts - Here)


For Father Mychal, it was just another silly letter from Rome to get around.

Father Mychal embodied what I always believed the Catholic Church stood for, what I was taught it was about by the good Sisters of Mercy: humility and loving service to the poor, the sick, the downtrodden, the marginal.

Father Mychal was living the "aggiornamento" of Pope John XXIII, another man of holiness and humility whose memory the current Church hierarchy wishes would just go away.

In my opinion, it is truly heart-wrenching to consider that had Father Mychal lived and continued to serve authentically, he likely would have been "silenced" or excommunicated by now by the current regime.

It is also disturbing to read the few hateful, anti-gay "reviews" on Netflix.  Compare Father Mychal Judge with that so-called pastor of that so-called Baptist church in Topeka.  They are not even in the same universe.

A very remarkable man. I've been meaning to watch this for some time now. Holiness, humility, and love: what the church stands for - or should stand for. Well said.