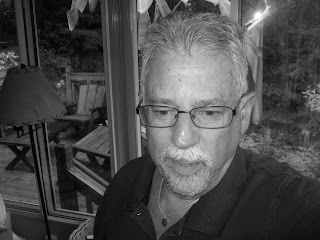 I have resisted the pressure to join for a number of reasons.

From the start I was repulsed by the term "Facebook".  I can't say exactly why, but perhaps it reminds me too much of the FBI's Most Wanted posters; or a catalogue of masks; or a hall of mirrors; or a dusty yearbook.

As the social network phenomena progressed, the nightmares of harassment, invasion of privacy and worse that made the news gave me pause.

But what really irked me was when someone "invited" me to view their photo album on Facebook and I linked on, only to find that I needed to join Facebook - that is open an account with my personal information, and yet another username and password.

Lately, Facebook has become so ubiquitous that it seems you can't do anything without it.  The local TV station holds a daily give-away that requires you to "LIKE" them on Facebook for a chance to win.  Non-profits sign up to win grants and cash by accumulating "votes" on Facebook.

New businesses and community groups all want you to connect on Facebook.  What ever happened to a simple Web Site?

It seems that all communication is now through Facebook.  What ever happened to simple Email?

From what I've seen of Facebook on other's accounts it is a confusing, irritating mess of drivel.  OK, so a lot of blogging is drivel too, but again, you don't need to be here in order to support your favorite non-profit or join some nebulous network of people you don't know in order to read my drivel.

People seem to have to announce their every activity and "LIKE" this or that, from the local cafe to their friend's new hair style or the party that all their kool friends were at last night.  There is definitely an aire of snobbery to Facebook - or at least that's my impression.

In general, the whole Facebook thing strikes me as juvenile.  Like school kids in the cafeteria.  Perhaps it is a generational divide.

I really would like to support Connecticut Labrador Rescue, Inc. which is where our dog Benni came from, but I am still resistant to join Facebook in order to do so.

My greatest fear of Facebook is that, like the Borg on StarTrek:
I WILL BE ASSIMILATED, and that RESISTANCE IS FUTILE.
Posted by Frank at 9:06 AM

I am so with you on this one. I am on facebook only because my daughter opened the account for me. I have a hell of a time relating to it and navigating it is nearly impossible for me.
To make matters worse, for some reason it is set up in French and my French is limited.
Yes, it does seem a bit juvenile to me, buth then again everything does when you are 66 years old.
saludos,
raulito

You are not alone Frank, there are two of us resisters. Although resistance is futile, of course, but - you know what Patrick Henry said.

The ex-roommate's kids persuaded him to join up, and now he has reconnected with a host of far-flung, long-lost cousins: that's the only advantage I can see to it. I suppose it's easier to share a few snapshots and chat-like notes than to write a whole email . . . or heaven forbid, an actual letter.

But as I don't have any long-ago friends or family I care to re-up with, and already email back and forth with the ones I do - no point to it for me. Blogging is enough of an outlet to the world for me, and even that I sometimes feel is too open, too public.

Russ, I occasionally feel the sting of being out there in blogland - all naked, so to speak. For me it is sometimes akin to a spiritual exercise - stripping the self of armor and being vulnerable, rather than being an ego thing.

Make that 3 of us, and counting.
Watch the film about the founder, and that "rate a date" thing kind of says it all.
An executive from Microsoft visited me, and I foolishly asked for a view of what it was all about. She pointed out that she was contacting a business person she had just met, and would ask him to be her friend, but "he could say no."
What are we, Five?
Besides, all you wonderful bloggers here at blogger fill up my time wisely.

Thanks, Theaterdog, but I was disappointed to find your blog devoid of postings.

Yeah, the whole idea of "would you be my friend" or "friending" someone is so schoolyard. Is this what the business world has come to?

You have nothing to fear... except for Farmville. Stay away from Farmville.

I'm not on facebbook either. 2 e-mail accounts and a blog is enough for me. I think it's an age thing too. At 60 just I can't be bothered.

BTW: I left a comment before but I don't think it went through. See what I mean? Ugh!

Yes, Frank, to what you said about blogging and the stripped, vulnerable feeling it gives. That's part of why sometimes I just have to pull back and keep radio silence.

I don't think the young'uns who have never known a world without internet can possibly understand the need for private space, private thoughts.

And I'm with Stan on "too much to bother with" - all these damned newfangled gadgets. Who needs 'em?

I'm on FB but I use it less and less all the time. I spend more of my time on Google+ these days.

I've never been a big fan of FB but using it to plan events for my motorcycle group has been good. If it wasn't for that, I think I would have left it just like I left mySpace.