Photos and Update With Restaurant Reviews 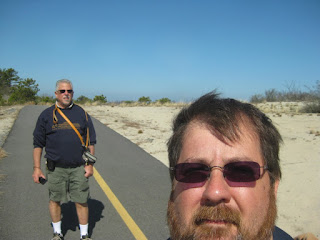 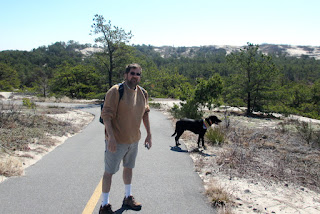 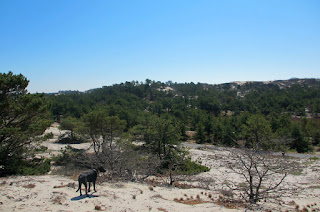 This town is pricy, even in the off season.  One of the reasons we go camping is the price of food in PTown.  We can cook for a week on what we'd spend in two days for meals out.

Joe's Cafe: great for coffee, breakfast and lunch. Outdoor seating.  This place is usually packed during the regular season - you may never get a table.  In March, it was busy, but tables were available.  Dog friendly.  As everything in town, a bit pricier than we are used to. Turkey sandwich with cranberry on multi grain bread, small bowl of soup (chili) and a bag of chips; Leon had a similar selection (with barley mushroom soup) and drink. About $17

Squealing Pig: Pub fare and and bar atmosphere.  The two of us shared a salad, shared a bowl of potato leak soup and shared a seafood platter (cod, 4 shrimp, 4 scallops, fries, coleslaw) two draft beers. Everything was good, but even sharing was a hefty tab (about $40).

Fanizzi's: We were too late for the early bird specials. Bread was good and refilled; Leon had salad, meatloaf with mashed potatoes, diet coke; I had broiled cod with spinach and veggies, water; We each had coffee, apple-berry crisp with vanilla ice cream. One dessert would have been plenty. About $67.

Michael Shay's - a PTown standby for those on a budget: This place has become "complacent" - there is no care taken in decor or presentation. The service was lacking - the gay waiter seemed like he was afraid to come near us. He spent a lot of time chatting with other customers and staff. We had the early bird specials. The "complimentary appetizer" consisted of a soup bowl with a plastic cup of some non-descript dip and about 8 Ritz crackers that looked like they were leftover from someone's party. The salad came in a bowl for two and the waiter gave us only one plate - Leon ate his portion out of the serving bowl. I had three pieces of stuffed filet of sole and water, Leon had three stuffed shrimp and a diet coke. I also had heartburn later. No alcohol. About $36 for two of us - cheap by PTown standards but we would have had a better meal if we'd gone to the supermarket, for a roasted chicken and some salad and eaten it in the hotel room.
Posted by Frank at 8:03 PM

Aw, I love PTown! And what a perfect week to be there!

Thanks for posting these photos. I love seeing them!
m.

looks great and very tempting ... only been to P-Town once, in the deep mid-winter when everything was covered in snow and I seem to have been the only person there ... or the only tourist, anyway, mad enough to go there that time of year ...!

PTown has to be bleak in winter with snow in the ground. I hear, if you don't drink, you will by the end of a winter there.

OMG what prices! Two can eat very nicely for twenty bucks or less down here . . . but of course Podunk is not a resort area like Ptown. Glad you guys enjoyed your trip.