WARNING: SPOILER, if you haven't seen the movie and don't want to know the ending, read no more! 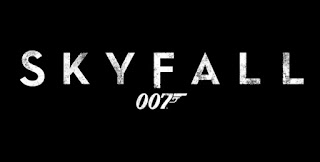 Skyfall was a good flick for a date night with the hubby, but as far as James Bond movies go, Skyfall was a bit disappointing.  Very little glamour, glitz, or sex.  What there was, the casino, for example, was not glamourous but rather sinister; the sex was rather brief and uninteresting.  Even the villain was uninteresting - supposedly a computer hacker/genius, but didn't fit the part; he was more of just a creepy guy.

Bond was anything but slick or sophisticated or competent.  Supposedly that was the theme - he's an old, washed up spy who no longer has what it takes.

There were too many times where you expected him to overcome or outwit the bad guys, escape unharmed or use some fantastic new technological gadget.  They talked alot about old school, and it was.  The ending was disappointing as well, the bad guy dies anticlimactically and M, who Bond was on a mission to protect dies as well.

Personally, I don't want a washed up old spy who can't shoot straight.  Give me a Bond who can wipe out an army of bad guys without spilling his martini.
Posted by Frank at 11:18 PM