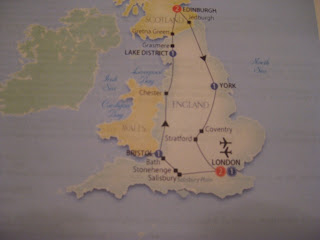 Leon and I getting ready to take a trip.  I can't believe we're doing this, but those sky mile points Leon's been collecting for years were going to start expiring...so we are biting the bullet, so to speak and scraping up a few pounds to fly "across the pond" to London and the English countryside.
Our friends Dave and Al, (the Bristol Dave and Al, not the Sturbridge Dave and Al) will be house and dog sitting while we are gone.  It makes me feel better knowing that our boy Benni will be able spend most of the time in his own home, rather than in another house or Dog Forbid, a kennel.

We are trying to pack light, hence, no laptop computer.  I can post a few time using Leon's iPod as I mentioned yesterday.  Pain in the butt, and no way to upload pictures.  Which is the whole point of blogging while touring England, isn't it mate?  Maybe there'll be a computer in the hotel or I can stop in a Internet cafe or public library.

Looking at the map I notice that all the towns we are familiar with here in "New" England have counterparts in "Old" England.  We should feel right at home.

I was in London once before - too many years ago to think about - in January 1969, when I was spending my Junior Year at Loyola University Rome Center in Italy.  It was semester break.  I traveled with some other students, then went off on my own with a Eurail Pass to see London, Paris, Portugal and Spain.  When I think about it now, I was 20 years old and traveling around Europe alone and thought nothing of it.  I spent almost a week in London, relieved to be hearing English being spoken for a while.  Unfortunately I couldn't speak it correctly.

My fondest and most "embarrassing" memory in London was asking the "Bobby" for directions to "Traffle-gar Square".  "Oh," he said, "You mean Traf-AAL-ga(r)" and graciously directed me.  I won't make that mistake again, I hope, but despite all the British TV shows we watch, I still have difficulty understanding spoken English at times.

In addition to "free" airfare, we got a great deal on a land tour.  We thought about renting a car - Leon loves cars  - but the thought of petrol prices, auto insurance riders, car rental fees, driving on the wrong side of the road with the steering wheel on the right, having to find places to stay along the way, etc. it seemed prudent to just go with a tour.  We'll see Stonehenge, Bristol, the Lake District, Edinburg, Scotland, York, the Cotswolds, and also a tour of London with breakfasts every day and dinners most evenings, most gratuities included.  The tour company had a winter special and we got a "last minute deal"- 8 nights for around $2,000 for two of us.  Not really "cheap" for us, but probably a steal nonetheless.

Well, its Netflix time and Leon is complaining that I spend too much time blogging...
Posted by Frank at 8:37 PM