A Fork In The Road or Deja Vu

Every so often one comes to a fork in the road of life. I was reminded of this in a couple of ways last Friday as I waited for Leon to find a steering wheel in a junkyard in Hyde Park, New York.

But let me begin in the middle. Anyone who knows Leon, knows that he is a car enthusiast. He (we) belongs to Lambda Car Club, Nutmeg Chapter. We are not wealthy enough for him to own one of those beautifully restored vintage autos from the 1940's or 1950's like some of the guys do. He doesn't have an original Mustang convertible in the garage (I wish).

What he does have is an old Chrysler LeBaron, I'm not even sure what year - so that tells you how enthusiastic I am about his hobby. 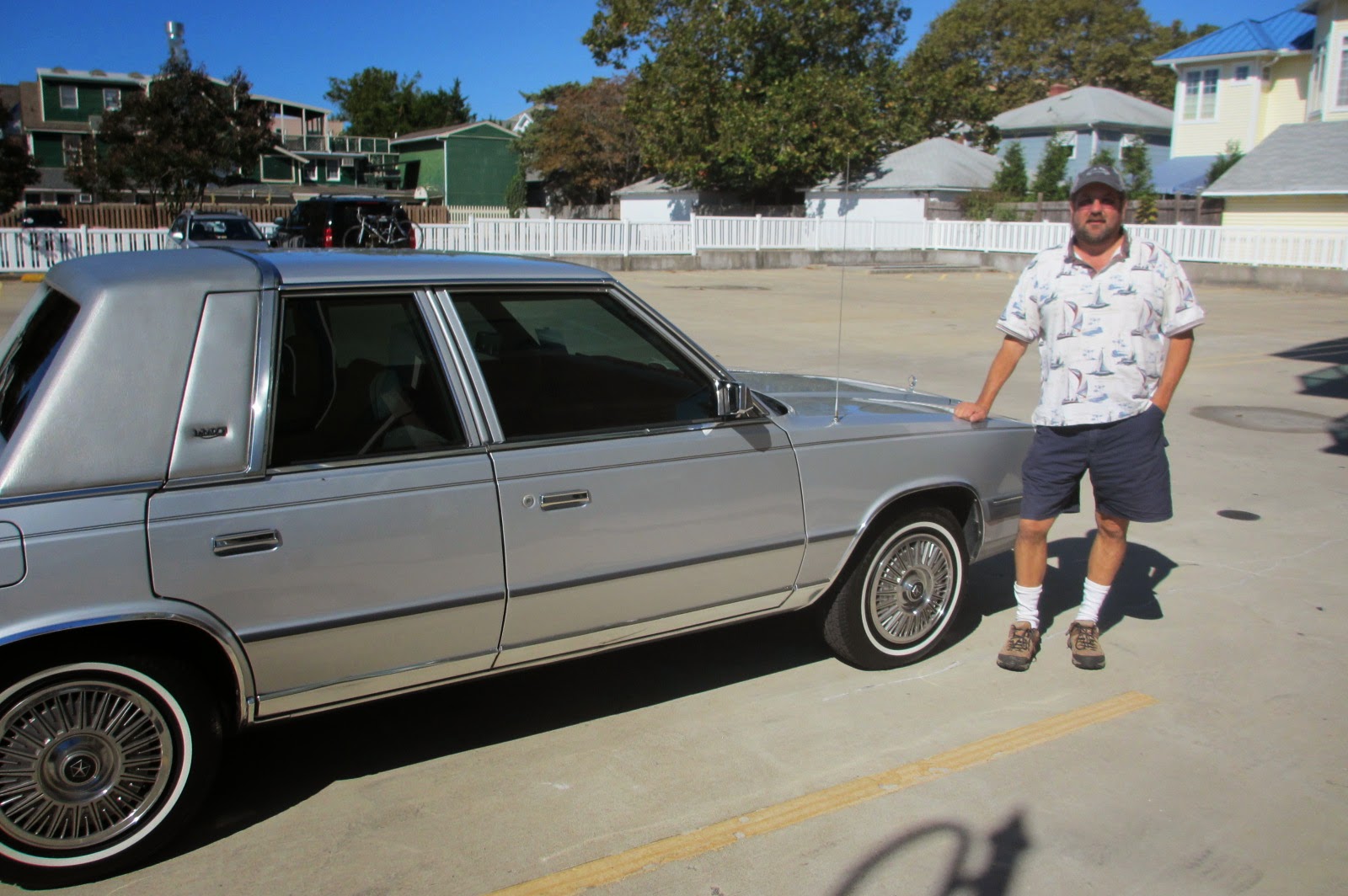 Well, he took the LeBaron to a car show two weeks ago and on the way home he ceased a brake caliper. He was able to drive it to a friend's house and have it towed to our neighborhood mechanic the next day ($). In the process, the tow truck guy didn't start the engine when unloading the car from the flatbed, merely forced it into neutral, thereby ruining ignition switch mechanism and the steering column. ($).

Giovanni, our friendly mechanic, said Leon should have kept driving the car when the brakes ceased, that it would have eventually caught fire and that the insurance company would have given him more than it was worth - which isn't much.

But by now Leon was into it for the price of the towing and the pride of owning a "classic" car. So he decided it was worth fixing.

In early May he had found parts for the LeBaron at a junkyard in Hyde Park, New York while there for the Rhinebeck Car Show. So he knew there was a LeBaron there waiting to be stripped of its steering wheel.

So last Friday he took a half day off and we drove to Hyde Park.

While I was waiting for him to extract the steering wheel I took Benni for a walk, made phone calls, answered emails and went for a ride. This was a good hour or more wait.

It was then I realized I had done this before.

Now I will begin at the beginning. Nearly twenty-seven years ago. When I was 40 and Leon was 26. When Leon’s old Chrysler K car got stolen and was recovered with a broken steering column. When the car was not drivable. When I assumed that the normal thing to do was to junk the car, call the insurance company and be happy if they paid anything after the deductible.

But Leon doesn’t do what normal people do when it comes to his vehicles. He dragged me off to some junkyard and found a compatible steering column and wheel, detached it from the junked car it belonged to, paid the man and then we drove back to the impound yard where he attached it to his K Car, signed the necessary paperwork and drove it home. No insurance company needed.

It was more than a entire sunny Saturday afternoon that I had wasted driving to and from a junkyard, watching him do auto repairs and wondering why I was there.

Wondering if I really wanted to get involved with this guy who couldn’t understand that junking the car was the most expeditious thing to do.

Wondering why he didn’t realize that the insurance company would likely pay something for a car that had been stolen.

Wondering why I was with this guy who had greasy hands and dirty clothes.

Wondering why I had agreed to drive him around while I got sweaty and bored just waiting.

But last Friday I realized that that day nearly 27 years ago was a kind of fork in my road. And even though I didn’t understand or appreciate Leon’s automobile addiction, we both chose the same road.

So there we were, nearly 27 years later, at a junkyard to fetch a steering wheel for another Chrysler K car that both I, and our friendly mechanic down the street, thought should be in the junkyard next to its organ donor.

The difference this time was that after the junkyard Leon took me to dinner in Rhinebeck at nice restaurant with outdoor seating.

On the way back from Hyde Park last Friday we passed a landmark that I think sums it up quite nicely. 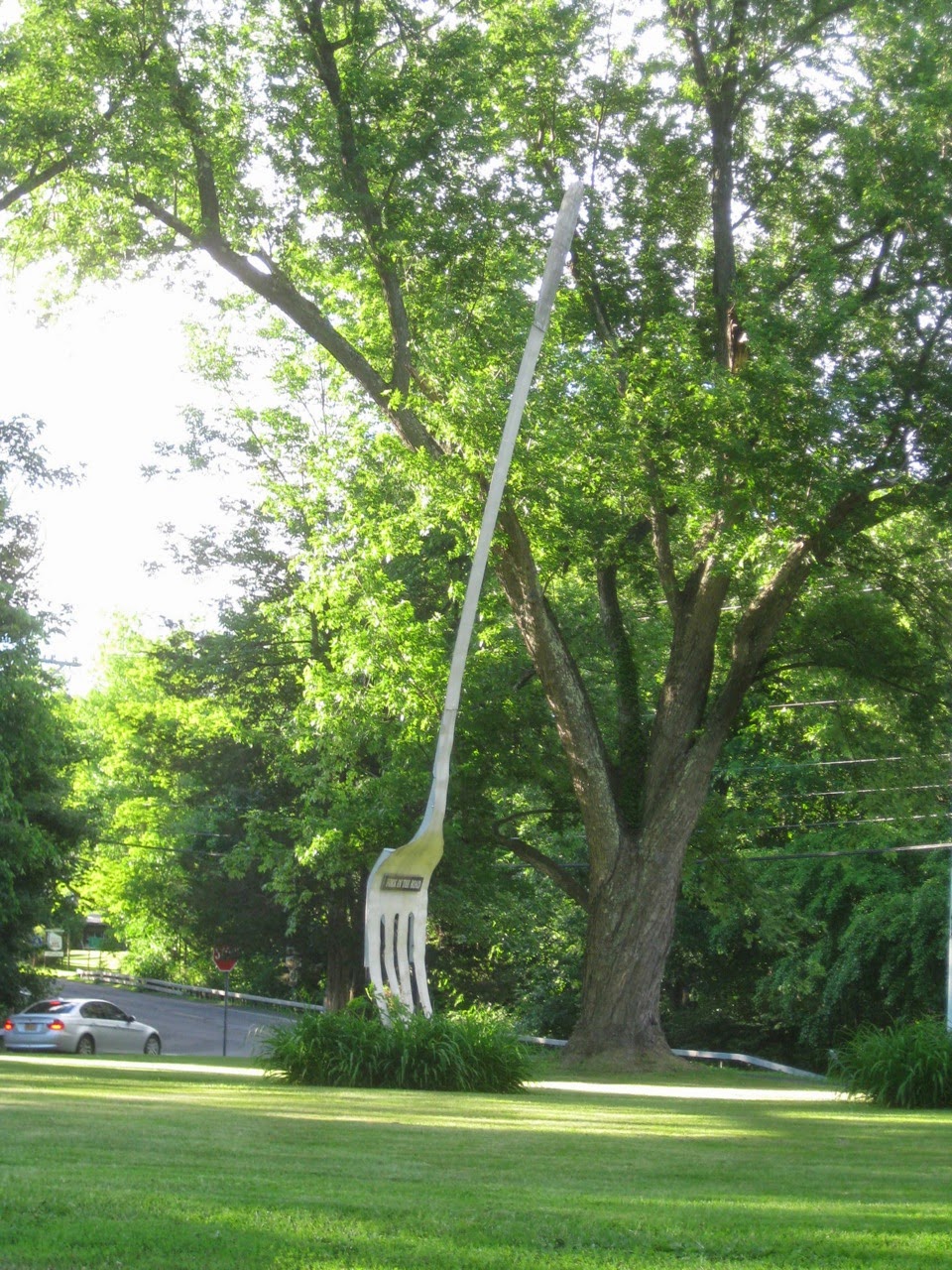 As we drove home I felt a profound contentment. Despite the forks in the road, we are still choosing the same way together.
Posted by Frank at 4:13 PM