How To Survive A Plague Part 2 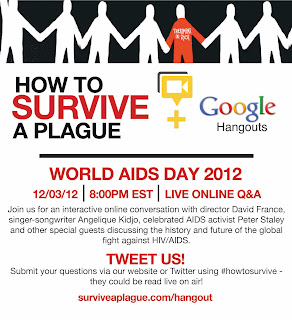 Just got in from the local showing of How To Survive A Plague.  The film was powerful, moving, artful, and dare I say nostalgic documentary of the history of Act Up and the challenges and achievements of the early AIDS activists.  A few times both Leon and I had moist eyes - seeing the courage of young men with AIDS putting themselves on the line, getting arrested in non-violent demonstrations and standing up to "authority".

One of the most poignant segments was the demonstration in front of the White House where loved ones and friends tossed the ashes of the dead over the fence onto the White House lawn.  I don't remember this protest being reported by the news at the time, but then the media did not view AIDS activism as very sexy or having mass appeal.

Of course most of the footage was before High Def, so the images are often grainy and the audio not always audible.  Subtitles were used in a few cases where it was difficult to make out what was being said.  But despite this, the film was very well done, well edited and kept us engrossed for two hours.

My only disappointment was that there were only about 28 people at the showing - on a college campus.  There were no faculty members, and almost no one from the local community.  I didn't see anyone from the local AIDS or gay organizations or the local or state health departments or any of the activists I worked with back in the eighties and nineties.  The turnout was pathetic.  But AIDS is so off everyone's radar now, that people are comfortably apathetic.

History is so important - especially this kind of history - real people living, dying, fighting to make a difference for those who now have the benefit of their activism and courage.
Posted by Frank at 9:14 PM