Made 4 King Cakes, with babies, this past weekend. I've been making them for a few years now during Carnival, just before Mardi Gras. They are made with a yeast dough - a brioche - and decorated with sugar frosting and purple, green and gold colored sugar. Some are filled with cream cheese or fruit jam. Some more elaborate than others.

Unfortunately, I can't post pictures, cuz my honey took the digital card reader with him to South Carolina (on a mummy visit). He's on his way home, so I will post pics soon.

Our first trip to New Orleans was probably 10 years ago. Before digital cameras, because we don't have jpegs of the trip. We were visiting my sister the Sister and got to stay in a guest cottage on the grounds of a large convent across Lake Ponchartrain. We rented a little GeoMetro and tooled around the City and countryside. There were parades going on all week, some in the City, others in surrounding towns. We were invited to go with a group of Nuns to the Big Parade on Mardi Gras, "Fat Tuesday" the last day of celebrations before Lent. We had to leave about 5 AM to get on time, which I recall was about 6.

What made the offer attractive was the fact that they had connections at a New Orleans funeral parlor on the parade route that would provide both parking and toilet facilities. This is important, of course, as the crowds would make finding a parking place nearly impossible and, although drinking alcohol is allowed anywhere and everywhere, bathrooms on the parade route are scarce. McDonald's and other quick stops were known to lock their facilities for the duration of the parade. Some folks would drive their pickup trucks, with their own private Porta-Potties, into the City in the wee hours and park near the parade route. While we were guests of the Undertaker, we were provided the "luxury" of relief stations: the women had access to indoor plumbing while the men were relegated to a large canvas tent in the back parking lot, in which was a wooden box trough filled with sawdust. This set-up was not for the pee-shy. By mid-afternoon, the sawdust was saturated and recycled beer was seeping through the wooden box, onto the asphalt and slowly out from under the tent and into the parking lot.

Meanwhile the townies were hoarding beads and trinkets thrown out by Rex, Zulu, Orpheus and Endymion. Little old ladies would crush your fingers with a quick stomp if you were foolish enough to reach for a stray doubloon. Its all in the technique. You stomp on your prize, THEN reach down to retrieve it. Beads on the "G" rated parade routes were generally most accessible to those closest to the street, on stepladders or with feminine charms that were not explicitly exposed. We've heard that elsewhere in the City, exposure, for both men and women, is heavily rewarded, depending on the crowd. Alas, we were in the Nun section.

Our more recent trip to New Orleans, in 2006, (see Nuances) a week before Mardi Gras, was very different. The streets were practically empty, there was no waiting for a table at any restaurant, it was quiet by New Orleans standards. But we bought a King Cake, just because they're sooo good.

Here are the pics:
The baby is hidden inside the cake. Whoever gets the piece with "da baby" has to bring a cake to the next party, which may very well be tomorrow. 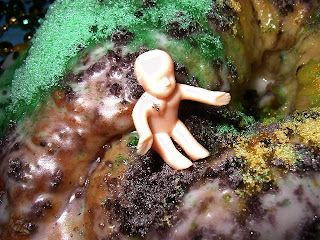 What's left of the King Cake with Cream Cheese Filling 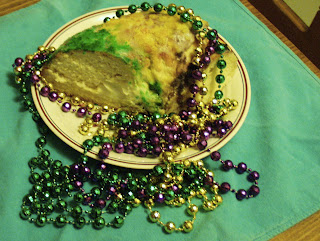 One of the two smaller King Cakes. I put some in the freezer for next week. They are expecting one at the office. 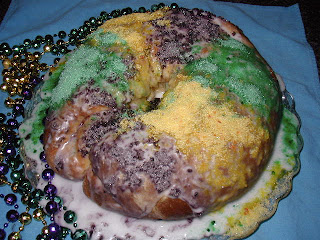 KING CAKE
This is the traditional New Orleans Carnival dessert. Carnival (Goodbye to the Flesh/Meat) begins after Epiphany and extends through Mardi Gras (Fat Tuesday) the day before Ash Wednesday and Lent. Some lucky party-goer will find the plastic baby ( which is the Christchild - the King) and must bring a King Cake to the next get together. Commercially baked cakes bear the warning about the hidden hazard baked in the cake.

Here is the recipe I gleaned from the internet:

KING CAKE
This is the traditional New Orleans Carnival dessert or Brioche. Carnival (Goodbye to the Flesh/Meat) begins after Epiphany and extends through Mardi Gras (Fat Tuesday) the day before Ash Wednesday and Lent. Some lucky party-goer will find the plastic baby ( which is the Christchild - the King) and must bring a King Cake to the next get together. Commercially baked cakes bear a warning about the hidden choking hazard baked in the cake.
1/2 cup warm water
2 pkg active dry yeast
1/2 cup plus 1 tsp sugar
31/2 cups unsifted flour; 1 cup additional flour
1 tsp nutmeg
2 tsp salt
1 tsp lemon zest
1/2 cup warm milk
5 egg yolks, scrambled with fork
10 tbsp softened butter (1 stick + 2 tbsp)
1 egg beaten with 1 tbsp milk
1 tsp cinnamon
1 small plastic baby doll (or dried bean or coin)
DIRECTIONS
Pour the warm water into a large mixing bowl, add yeast and 2 tsp sugar. Mix and allow to rest in a warm place for 10 minutes until the mixture bubbles. Add the 1/2 cup of warm milk and the egg yolks.
Combine 31/2 cups of the flour, salt, lemon zest, the remaining sugar, nutmeg, and sift into the liquid mixture about a cup at a time, mixing well with a wooden spoon. After adding about 2 cups of flour, beat in 8 tbsp butter, 1 tbsp at a time until you can't see the butter. Add the rest of the flour mixture. Place the dough on a floured counter or bread board and knead, gradually adding up to 1 cup more flour. Knead about 10 more minutes, till the dough is smooth and elastic.
Place the dough into a large buttered bowl and butter the surface of the dough ball. Cover and let rise in a warm place for 11/2 hours, till double.
Coat a baking sheet or pizza pan with butter. Place the dough on a floured counter, punch it down a bit and sprinkle with cinnamon. Divide the dough in two and shape each into a cylindrical or rope shape, lay them side by side, pinch the ends together and twist them around each other. (Or make three ropes and braid). Form the twist into a ring or wreath and place it on the buttered baking sheet. Hide the plastic doll inside the ring. Cover with a towel and allow to rise for at least 45 minutes in warm place.
Preheat the oven to 375 degrees. Brush the cake with an egg wash (1 egg with 1 tbsp milk). Bake for 25-35 minutes till golden brown. Allow to cool.
ICING
Prepare colored sugar by putting 1/3 to 1/2 cup sugar into each of three small plastic containers with tight lids. Into one place a few drops of yellow food coloring and shake well till all the sugar is yellow. In the second, place a few drops of green and do the same; in the last place three drops of red and one or two drops of blue to make purple and shake till well blended. (adjust color if you like).
Use about 1/2 box of confectioners sugar (about 11/2 cups) and add 1 tsp real lemon extract. Add cold water one tsp at a time until the sugar icing stirs easily but not watery.
When the cake is cool drizzle the white icing on the cake till it is entirely coated. Take the colored sugars and sprinkle on in bands of yellow, green and purple. (Three bands in each quarter of the cake). Place Mardi Gras beads around the cake for presentation.
(WARNING: Plastic toy in cake may be choking or dental hazard).
Posted by Frank at 9:26 PM No comments: 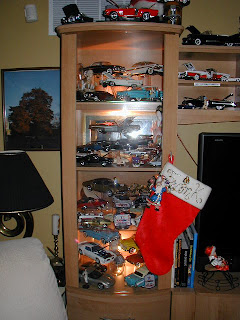 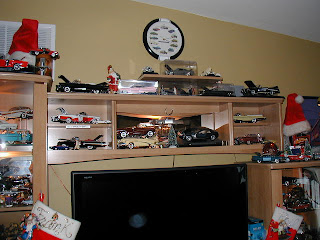 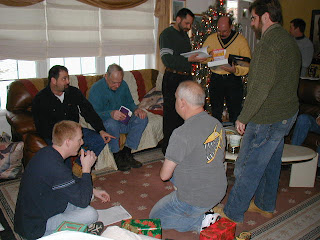 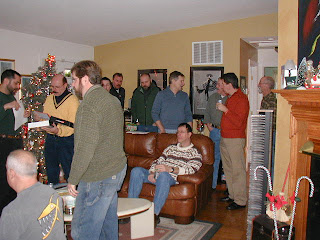