The Underlying Cause Of Our Anxiety: It Has A Name - Gaslighting 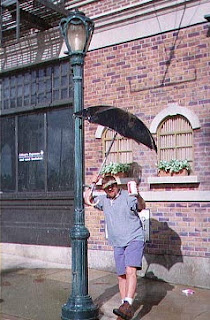 Came across several articles that finally describe what I have been feeling for months. That uneasy feeling that despite video proof, witnesses, fact checking, and science, we cannot seem to get out from under obfuscation, denial, and some nightmarish fog that is spreading over this nation. I don't normally repost entire published articles, but I'm doing so here along with some links. Read on:

Wikipedia: Gaslighting or gas-lighting is a form of manipulation through persistent denial, misdirection, contradiction, and lying in an attempt to destabilize and delegitimize a target. Its intent is to sow seeds of doubt in the targets, hoping to make them question their own memory, perception, and sanity.[1][2] Instances may range from the denial by an abuser that previous abusive incidents ever occurred up to the staging of bizarre events by the abuser with the intention of disorienting the victim. The term owes its origin to Gas Light, a 1938 play and 1944 film, and has been used in clinical and research literature.[3][4]


The CIA officially determined that Russia intervened in our election, and President-elect Donald Trump dismissed the story as if it were a piece of fake news. "These are the same people that said Saddam Hussein had weapons of mass destruction," his transition team wrote in a statement. "The election ended a long time ago in one of the biggest Electoral College victories in history. It’s now time to move on and ‘Make America Great Again'."
It wasn't one of the biggest Electoral College victories in history, so presumably that's another red-herring lie to distract from Trump treating the Central Intelligence Agency of the United States like it is some rogue blogger to be cast to the trolls. A foreign government's interference in our election is a threat to our freedom, and the President-elect's attempt to undermine the American people's access to that information undermines the very foundation upon which this country was built. It's also nothing new.

Trump won the Presidency by gas light. His rise to power has awakened a force of bigotry by condoning and encouraging hatred, but also by normalizing deception. Civil rights are now on trial, though before we can fight to reassert the march toward equality, we must regain control of the truth. If that seems melodramatic, I would encourage you to dump a bucket of ice over your head while listening to “Duel of the Fates." Donald Trump is our President now; it’s time to wake up.

"Gas lighting" is a buzzy name for a terrifying strategy currently being used to weaken and blind the American electorate. We are collectively being treated like Bella Manningham in the 1938 Victorian thriller from which the term "gas light" takes its name. In the play, Jack terrorizes his wife Bella into questioning her reality by blaming her for mischievously misplacing household items which he systematically hides. Doubting whether her perspective can be trusted, Bella clings to a single shred of evidence: the dimming of the gas lights that accompanies the late night execution of Jack’s trickery. The wavering flame is the one thing that holds her conviction in place as she wriggles free of her captor’s control.


To gas light is to psychologically manipulate a person to the point where they question their own sanity, and that’s precisely what Trump is doing to this country. He gained traction in the election by swearing off the lies of politicians, while constantly contradicting himself, often without bothering to conceal the conflicts within his own sound bites. He lied to us over and over again, then took all accusations of his falsehoods and spun them into evidence of bias.

At the hands of Trump, facts have become interchangeable with opinions, blinding us into arguing amongst ourselves, as our very reality is called into question.

There is a long list of receipts when it comes to Trump's lies. With the help of PolitiFact, clear-cut examples of deception include Trump saying that he watched thousands of people cheering on 9/11 in Jersey City (police say there's no evidence of this), that the Mexican government forces immigrants into the U.S. (no evidence), that there are "30 or 34 million" immigrants in this country (there are 10 or 11 million), that he never supported the Iraq War (he told Howard Stern he did), that the unemployment rate is as high as "42 percent" (the highest reported rate is 16.4 percent), that the U.S. is the highest taxed country in the world (not true based on any metric of consideration), that crime is on the rise (it's falling, and has been for decades), and too many other things to list here because the whole tactic is to clog the drain with an indecipherable mass of toxic waste.

The gas lighting part comes in when the fictions are disputed by the media, and Trump doubles down on his lies, before painting himself as a victim of unfair coverage, sometimes even threatening to revoke access.

Trump has repeatedly attempted to undermine the press, including such well-respected publications as the New York Times. He has disseminated a wealth of unsubstantiated attacks on the media, though this baseless tweet from April pretty much sums it all up, "How bad is the New York Times -- the most inaccurate coverage constantly. Always trying to belittle. Paper has lost its way!"

As a candidate, Trump's gas lighting was manipulative, as President-elect it is a deliberate attempt to destabilize journalism as a check on the power of government.

To be clear, the "us" here is everyone living under Trump. It's radical progressives, hardline Republicans, and Jill Stein's weird cousin. The President of the United States cannot be lying to the American electorate with zero accountability. The threat of deception is not a partisan issue. Trump took advantage of the things that divide this country, pitting us against one another, while lying his way to the Oval Office. Yes, everything is painfully clear in hindsight, but let’s make sure Trump’s win was the Lasik eye surgery we all so desperately needed.

The good news about this boiling frog scenario is that we’re not boiling yet. Trump is not going to stop playing with the burner until America realizes that the temperature is too high. It’s on every single one of us to stop pretending it’s always been so hot in here.

There are things you can and should be doing to turn your unrest into action, but first let's empower ourselves with information. Insist on fact-checking every Trump statement you read, every headline you share or even relay to a friend over coffee. If you find factual inaccuracies in an article, send an email to the editor, and explain how things should have been clearer. Inform yourself what outlets are trustworthy and which aren’t. If you need extra help, seek out a browser extension that flags misleading sites or print out a list of fake outlets, such as the one by communications professor Melissa Zimdars, and tape it to your laptop. Do a thorough search before believing the agenda Trump distributes on Twitter. Refuse to accept information simply because it is fed to you, and don’t be afraid to ask questions. That is now the base level of what is required of all Americans. If facts become a point of debate, the very definition of freedom will be called into question.

It will be far easier to take on Trump’s words when there is no question of what he’s said or whether he means it. Regardless of your beliefs, we all must insist on that level of transparency. Trump is no longer some reality TV clown who used to fire people on The Apprentice. He is the President of the United States.

The road ahead is a treacherous one. There are unprecedented amounts of ugliness to untangle, from deciding whether our President can be an admitted sexual predator to figuring out how to stop him from threatening the sovereignty of an entire religion. It’s incredible that any of those things could seem like a distraction from a greater peril, or be only the cherry-picked issues in a seemingly unending list of gaffes, but the gaslights are flickering. When defending each of the identities in danger of being further marginalized, we must remember the thing that binds this pig-headed hydra together. As we spin our newfound rage into action, it is imperative to remember, across identities and across the aisle, as a country and as individuals, we have nothing without the truth.
TACTICS USED BY THE GASLIGHTER  Source: https://lonerwolf.com/gaslighting/