Having mentioned my Memoir on Facebook a day or so ago, I am reminded that some thoughts I wrote in the AFTERWORD of the book are more than relevant today in view of recent developments in the conservative fringe movement that has hijacked the Republican Party. I am sharing that final chapter of my memoir here (forgive me -- I may have shared this some time back) in hope that 1) you will find it worthy of your time to read it; 2) that some of you might want to read the entire book which is not at all like the AFTERWORD - it is much more entertaining and I think even the serious chapters will hold your interest. Available on Amazon in print and Kindle. https://www.amazon.com/Did-Ever-Horse-Coming-…/…/1619335573…

So here goes:
Peter M, the friend to whom I addressed the Preface, died from complications of AIDS, like too many other people I have known. I never finished composing that letter to him in 1987 and so it was never sent. Here, many years later, I include an Afterword, addressed to him.
* * * * *
May 2014
Dear Peter,

I’ve somehow survived to 2014. I am old—or pretty nearly old as life journeys go. In the grand scheme of things, I am nobody and my life is irrelevant. So why should my story, my experiences beginning more than half a century ago, matter to anyone? Why should I bother to write down these snippets of my life?

The answer to that last question: I had to write this account, even if no one ever reads it, because I was compelled to do so in the same way as I was compelled to come out; it was a matter of survival. And if I am to live any semblance of an authentic life, I must come out unreservedly and often; because coming out is never only an event: it is a continuous process and one that challenges me daily.

Ann Bancroft as Ma Beckoff scolded Harvey Fierstein’s Arnold in Torch Song Trilogy: “You haven’t spoken one sentence since I got here,” she says indignantly, “without the word gay in it.” How often do I check myself so as not to offend the likes of all the Ma Beckoffs in the world with constant gay references?

I am challenged daily to come out, again and again and again, because, even as things appear to be changing, there still exist subtle and pervasive societal and cultural norms that are intended to usher us back into our closets: the veiled but insidious beliefs, behaviors, words, and hatred that are still widely tolerated.

I am challenged to come out, again and again and again, because of the hate and vitriol and rage that seem to escalate in response to every equal rights victory and with every courageous individual who comes out and who refuses to remain silent and invisible.

I am challenged to come out, again and again and again, because too many gay kids still choose suicide as their only option to escape bullying and familial rejection; because some lawmakers still introduce bills that would take back our hard won rights and liberties; because some religions still wave signs declaring that “God hates fags” while others, less blatant, use more refined and educated language to condemn and vilify us.

My coming out was not only a matter of self-preservation; it was and continues to be a uniquely liberating, transformational, spiritual, and healing life experience. I do believe that coming out is the only antidote to the poison of societal oppression that tries to deceive us into believing that the closet is the safest place to be, that the closet will ultimately protect us from the world, from ourselves, and from eternal damnation.

The closet’s false security is ultimately suffocating and fatal to one’s emotional and psychological integrity, if not to one’s physical existence. The closet is built on fear and guilt, but more so on societal and religious disapprobation and condemnation — a formula for what is called internalized homophobia. The closet derives power from this internalized homophobia, from our internal conflicts and fears, the artificial conflict between some bogus good and fake evil: the fear of rejection, reprisals, and violence, and the terror of a mythologized Last Judgment and ungodly wrath.

Despite all of that, we persist in our coming out as if our lives depended on it — because they do.

Coming out is so vital to our integrity that the impulse to acknowledge and be true to ourselves is, in many respects, not unlike our innate survival instinct.

The fact that the event that we call coming out is virtually universal to the contemporary homosexual experience suggests that it is not an inconsequential phenomenon.

Think about that. Coming out has a reality beyond our individual experience.

It is both a unique and a shared experience—one that unites us in some fundamental way.

Our sexuality, our gayness, is mostly invisible to others. Coming out and being out involves being visible—both when we look in the mirror and when others see us.

Sometimes, in order to be visible to others, we have to be “in their face.” Sometimes we need to tell our stories, each of us, story after story, after story, until they “get it.”

Because “they” are still trying to define “us,” tell us who they think we are, tell us that we are objectively disordered or immoral or sinful or worse.
Who are “they” and who do they think they are?

Unfortunately “they” are not only the ignorant and bigoted, but often otherwise intelligent and sometimes even well-meaning individuals.

Why do “they” think they know more about our sexuality, or us, than we do?

More to the point, why do they care?

Certainly “they” outnumber “us” and we’ve always been an easy target. Does their inability to save our souls or change us, or to limit our freedom somehow make them inadequate or fearful?

What is in it for “them” that they so persist?

It amazes and frustrates me that our stories—the actual lived experience of gay, lesbian, bisexual, or transgender individuals—are so summarily ignored, discounted, and dismissed.

It baffles me that many vocal and influential individuals persist in holding to and disseminating absurd, erroneous, and irrelevant opinions about us.

This is unacceptable and can no longer be tolerated.

“They” can only make their own positions tenable by repeating questionable scriptures, fabricated “studies,” pseudo-science, and outright lies—and repeating them over and over as they wholly disregard us and our voices.

I can only pose a few questions for others to try to answer:

What is it about homosexuality and sexual and gender non-conformity that makes it such a lightning rod?

What is so unique about it that religious factions condemn it, regressive governments ban it, entire cultures punish it, and ordinary people are moved to hatred and violence by it?

Why are millions of dollars spent to fight us and to deny us equal protections under the law?

These questions underlie the need to tell my story. As for the first question—whether my story or experiences will matter to the readers or not—is for each of them to decide. But I do know that this is my voice and my truth, for what it’s worth.

For me the value in telling my story here, beyond the healing, is to preserve a tiny slice of collective history—to document what it was to be gay and to come out in a particular time and place. I want to remember all the others who were there along with me, creating our lives together and defining our sexuality as we went along.

My hope is that others find some value in that as well.

With Fondness and Love,
Frank 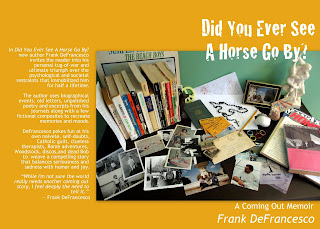 Labels: Current Events, Did You Ever See A Horse Go By?, Gay Life, Politics, Religion