NOTE: have not been posting as we won't be getting internet until Tuesday, if all goes well; and posting by iPhone is, well, I just don't often think of doing so.)

Don't envy us, we have winter here full throttle. It is 25 degrees out now (7:38pm). And the cold will be with us at least through the week. Yeah, you all are going to the beach in Connecticut.

Fortunately Cochiti Lake is in an area sheltered from the more severe weather around the state. We have a dusting of snow here and some fairly strong winds. This could all change by tomorrow morning, but we hope to avoid the worst of the storm and most of the snow. Roswell, considerably south of here, is getting the brunt of the storm and like 10 inches of snow.

Go figure. At least we don't have a 300 foot driveway.

The lights have flickered off for a second twice this evening, so I am wondering how the grid is here and whether we are dependent upon some power relay from Albuquerque where the storm is more severe. Oh, well.

We have been sprucing up the new homestead, pained the kitchen greens and the fireplace a yellow/gold. Bought a love seat that opens into a twin bed for guests. Much cleaning, cleaning, unpacking, arranging, finding a spot for everything...we got rid of so much STUFF back in Connecticut, but we still have stuff in the garage that we can't bring in.

We had six guests (Len and Sam, Wendy and Don, and Linda and Angie) over on Christmas Eve and went to a neighbor's for Christmas Day dinner where there were ten neighbors (including us) for dinner. Forgive me, I am not one to take photos of dinner guests. Suffice it to say a few have had most interesting lives and tales to tell.

We've been here four weeks and we know more people in our neighborhood here than we knew in fifteen years in Bristol. Living in a small town in close proximity to others will have it's good points and...a bit less privacy than we were used to.

Being 35 miles from anything means having to plan out trips to Santa Fe or Albuquerque. We have a gas station here and a convenience store. One doesn't mind paying $6.50 for half gallon of ice cream when one must. We also can't just run out for Chinese whenever we feel like it.

We took a nice long hike yesterday on the Dome Road (but we have yet to explore this road all the way to Los Alamos) and again this afternoon on the trail off of Koorani Street. The views change with the sun and the daylight.

We have to go get two more license plates and driver's licenses on Monday. By registering our vehicles we will get off the tax rolls in Bristol. There is no property tax on vehicles here.

But I will be paying some increased cost for Medicare, I believe; and Leon will be paying a bit more for health insurance too. Blue Cross assigned me a doctor in Los Alamos which the Blue Cross doesn't realize would take an hour longer to drive to than Santa Fe even though it is closer if I were a crow.

We have yet to see a bill for electricity and natural gas. Food prices are much higher here I think, though residents from other states like Alaska and Texas say food is cheaper. There is no Shop RIte or Ocean State Job Lot. There is a Big Lots and all of the major chain stores and a gazillion stores one has never heard of with more shopping than anywhere in Connecticut. (Imagine the Berlin Turnpike x 100 for Albuquerque and maybe x 30 for Santa Fe). Lots of restaurants too.

But not much in between, and Cochiti Lake is pretty much in between. In addition to the gas station and convenience store there is a PGA golf course with a pretty good restaurant and a very nice library. A writer's group will be meeting in January and there are a number of other interest groups that meet here also.

Believe it or not, I've only had a meal with green chili once in the month we've been in New Mexico. And I'm not complaining. 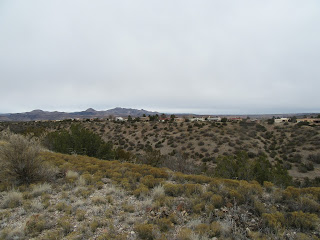