This Rock is on our property where the owner of the property behind us has paved a right-of-way. 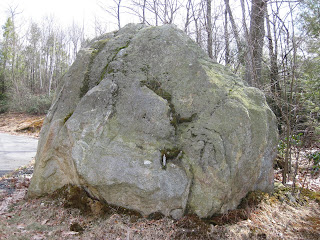 There is a path along the right-of-way that we take to the woods. It has been a project of mine to build a stone wall along the path. Every time I take the dog for a walk I try to add at least one stone to the wall (except when all is frozen) even if just a small one. 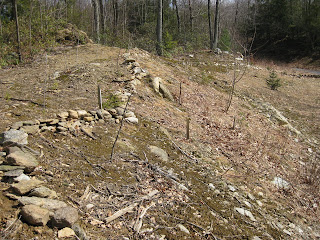 I am reminded of a story my grandma used to tell. It is Catholic apocrypha, told with the slightest irreverence. It seems that Jesus and the apostles were out walking in the countryside when they came upon a stream. Jesus asked each of the twelve to pick up a stone, place it in the stream so they could walk across. He further instructed that the last one should pick up each rock and relay it to the front. San Pietro (St. Peter) whose name means "rock" was the laziest in of the twelve and he chose the smallest rock, barely large enough to step on. Once on the other side of the stream, each apostle stood, holding his rock. Jesus then blessed the rocks and turned them to bread. San Pietro ended up with the smallest loaf of all.

There are lots of loose rocks on the property. In the spring new rocks are poking through, having been frost heaved to the surface. I've been busy doing a few rocks each day. It is probably going on four years now that I've been adding stones. The pathway reminds me of someplace in New Mexico. I've planted prickly pear cactus along the wall, here and there. 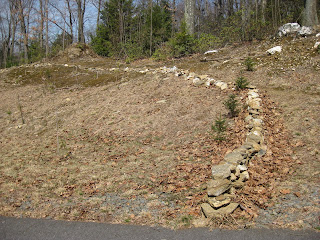 I've also been adding flat stones to the walkway by the deck. Our landscaping is done with what is available as I cannot afford paving brick or expensive plants. Sometimes we acquire odd pavers or brick that someone had discarded. So it is a hodge-podge but when filled in with moss, it looks OK. 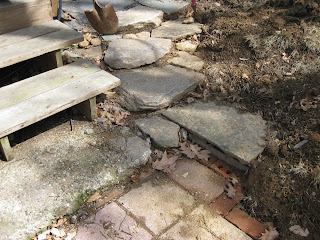 The back wall was a two year project. We went up back with the pick-up truck several times to gather stones. It is amazing how little wall you can build with a single load of rocks. 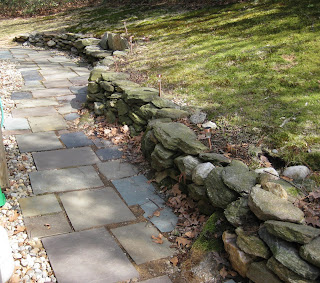 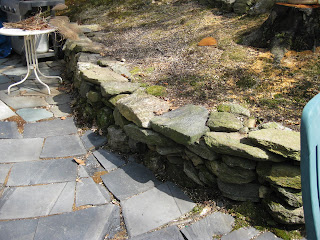 This is the stone path to the rock garden. In summer it is full of cacti, yucca, hens-and-chicks and various other rock-garden types. 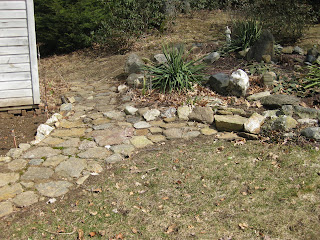 And this is Bruno, at 15 plus, full of lumps and growing horns, but still just taking it all in (or all for granite) 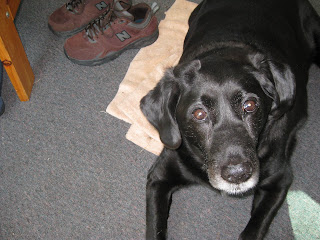 It has been since November 1, 2008 that I've been a free agent. The down side of being self-employed is that I don't make a lot of money. I don't even make half what I used to make. I don't make a third of what I used to make. I should be worried. I am, to some extent, concerned about about how we'll make ends meet, but I worry about how we will buy stupid things like toilet paper and toothpaste.

With all of the talk of economic doom and difficult times ahead, I should be more worried. I should be out looking for a real job. But I am so happy not to be employed. There are these moments every now and then when I just get giddy. When I feel the freedom I have acquired all over my body like the burst of pleasure you get when eating chocolate ice cream at a beachfront cafe on summer vacation.

I have nothing against work, but I have rarely enjoyed employment. The reluctant rebel in me was always discontent, a square peg, a Sisyphus, a Maynard G. Krebbs. It finally feels right. Now, if only I could make a living.
Posted by Frank at 7:12 PM No comments:

I've spent the past few days with a condition that I find embarrassing. I don't know exactly why, perhaps because I associate it with images of gluttonous, Victorian gentlemen with swollen toes, who have gotten their just desserts, so to speak. In fact, when I Googled "gout cartoons" to illustrate this post, that is exactly what I found. There were some others, but none were funny. There is, of course, nothing funny about gout. The other night as I lie awake in bed imagining a knife with a red hot blade implanted in my foot while gremlins hammered and poked needles into my toe, I thought that amputation at the ankle would come as a relief.

This is my second flare up. The first was just about two years ago. At that time I thought I had a broken toe; it was a weekend, of course, so I went to a walk-in clinic. The doctor's insight included the fact that I had recently become diligent about taking a daily low-dose aspirin. Aspirin can increase the uric acid in the blood which results in painful crystal deposits in certain joints, particularly the big toes. The crystals initiate an ineffective immune response that causes swelling and more pain. The prescription included a medication that instructed me to take one pill every hour until feeling nausea or till a maximum dosage was reached. I was able to take the maximum dosage without any ill effects until the following day when I felt like I was dying. My insides eventually got outside and my abdomen and ribcage hurt for days. The gout had cleared up, however.

This time I stuck to an anti-inflammatory prescription, ice packs and a plethora of internet wisdom. Information on this ailment is the most confusing, contradictory mixtue of nineteenth century science, hocus-pocus, old wives tales and folk remedies. Many of the websites devoted to gout information are thinly disguised fronts for selling a book of secret home remedies. Among them are eating cherries and strawberries, drinking apple cider vinegar "with the mother" and taking baking soda. Testimonials abound. There are no scientific studies confirming or disproving these cures, but the condition will often subside in a few to several days, basically untreated. So "cures" could be a matter of timing and coincidence.

On the other hand the dietary advice to preventing recurrences of gout include gross contradictions. Forbidden on some lists is vinegar, one of the "cures". Basically one should avoid all meat, including poultry and most all fish as they contain the main food chemical culprit, purines. Legumes, another source of protein (and thus of purines) should also be avoided. Many fats and oils are prohibited as well as white flour and sugars. Molasses and maple syrup are no-no's as are strawberries, another one of the folk "cures/preventatives. Most advice encourages increasing fruit and vegetable intake while other lists forbid tomatoes, spinach, asparagus, dried fruits, mushrooms, cauliflower, peas, beans, celery, radishes, soy milk, dairy products, beer, wine, chicken broth, chicken soup, eggs, oatmeal, whole grain cereals, whole wheat or whole grain bread, chocolate, caffeine, carbonated beverages, table salt.

If one eliminates all the bad foods, including those on the good list, one is left with water, cherries and potatoes. Think of the combinations!

In the weeks leading up to my gout episode I was eating either homemade chicken soup or lentil soup daily, we went out to dinner and ordered fish or hamburgers a few times, had pasta with tomato sauce, had homemade oatmeal cookies made with brown sugar, molasses, and raisins. I was also making and eating homemade yeast breads, macaroni and cheese, and eating yogurt, sour cream, milk, eggs, chocolate, coffee. I also was aware that I was forgetting to drink water, something that I have to remind myself to do. I hadn't had a cherry since that piece of pinapple upside-down cake I had six months ago.

So this suffering was my own fault, that's why I am so embarrassed, I've been a real glutton.

My desire to prevent another gout attack in the future also included an internet education on modern medicine. I can get a prescription that will lower my levels of uric acid permanently, provided I take it daily, forever. The side effects of this miracle drug include a severe reaction that causes the skin to peel off in sheets resulting in eventual death. One that I can only imagine is more painful than gout.
Posted by Frank at 5:45 PM No comments:

I had five lumberjacks .... at the house today.

We've got (had) this black birch tree near the sunroom that has been dying off and losing branches for the past few years. Probably because when we dug out the hill and put in the stone wall five or six years ago, we hacked out a couple of the tree's roots that were protruding into the new pathway and patio. Anyhow, the tree had to go to avoid any potential damage to the house. We would have done the job ourselves, but because the tree was on a hill and near the house, we called in the tree service. Five lumberjacks showed up. The stuff fantasies are made of.

Here are some clips of the job (and the lumberjacks).


Right after the tree was removed and the lumberjacks cleared out, the birds (finches?) were frantic. Not only was their bird feeder gone but so was the tree it used to hang on. They were actually making distressful chirping sounds. They seemed very upset. Can you imagine how the animals in the woods and forest must feel when some developer comes in a clear-cuts acres of trees to build condos. Like people who lose their homes in a hurricane or tornado.

I strung up the squirrel-proof bird feeder in another tree and it was only a short time before the birds zeroed in on it. They seem content once again.

Pics and videos are taken with a Canon Power Shot SD1100 IS. Still learning how to use it.
Posted by Frank at 8:03 PM No comments: