It has been nearly one month since I lefty my job as a Grant Writer for the homeless shelter. I worked there two years almost to the day. I took the job almost out of desperation after a difficult time that I've written about elsewhere. It was in many ways too similar to the previous job: the nearly identical grueling 50 minute to 1 hour commute into the city and the same returning home; the winters getting home in the dark; the 8 hours with the back-aching office chair and neck straining computer monitor; the depressing neighborhood. I hated that at 8:15AM, I couldn't wait till 4:15PM and that on Monday, I lived for Friday. I was wishing my life away. Although I was involved in a "worthy cause" I seemed to get little satisfaction from my work. My boss and I had discussed my intentions to resign at the end of October. When he left completely unexpectedly, it pretty much made my decision certain.

Anyhow a colleague's introduction got me in unscheduled interview at a local non-profit that was looking for someone to write grants for them on a "per diem" basis. So, here I am, a free agent. The pay is 3 times what I was making at the shelter, but the hours are about one-sixth what I was working...and I have to pay for my health insurance. Not exactly a lucrative position and pretty scary in the present economy. But then I have never been motivated by money.

I don't miss my old job - not for a minute. I am doing, at least for now, what I have wanted to do: see the daylight, go for long walks with dog, do some chores around the house, relive my chronic back-and-various-body-parts ache, lose a few pounds, and going through a list of other things I've been putting off for years. Perhaps turning 60 has had a lot to do with it. It is possible that I'll have another 20 years, give or take. When I measure that against the time I've been with my partner (20 years) the age of our dog (15 years) the span of years since I first went to Italy (40 years), I don't want to put off my living any longer.

On Tuesday the old dog and I took a hike to Pinacle Mountain. The short route was not an option because parking is now restricted. We had to take the long route...about 1.8 miles of rugged terrain to the lookout atop the rock and another 2 miles on the less rugged road back to the quarry. This is a hike I used to do several times a week when I worked second shift at the hospital (when I was in my thirties). It was a good, strenuous walk. It was sunny, peaceful, nostalgic. I forgot how long it would be and didn't take water. I promised Bruno, the dog, that there would be water on the top of the mountain - pools of rain water in the depressions of the rock. Lucky for the thirsty guy, I was right. The top of the ledge which is all rock has beautiful scrub pines and junipers growing out of the cracks like bonsai trees. I always loved the look of the twisted wind-blown trees. Unfortunately, I didnt have my camera with me.

Another little joy was discovering that some prickly pear cactus that I had scattered in an area just off the trail (among several other places) had taken root many years ago and were still thriving. My aesthetic sense had seen the desert-like terrain as a good place to release those pesky opuntia to the wild. My cactus garden has traveled with me from my previous residence to my present location and the opuntia, which are native to Martha's Vineyard and other coastal areas like Sandy Hook, NJ still dominate my garden with yellow blooms in June. 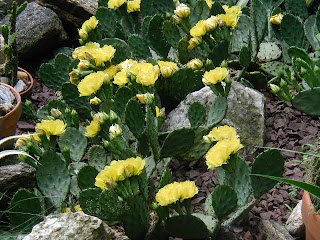 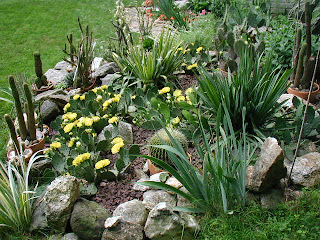 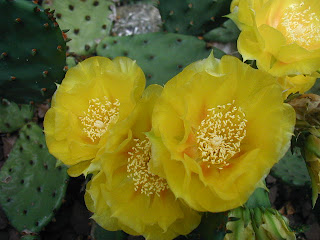 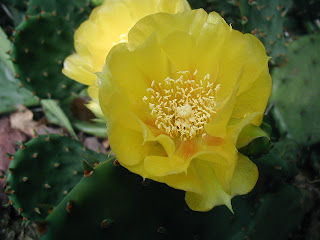 Well, all in all, I am content for now. The new life(style) seems to suit me. I am feeling a sense of freedom that makes me almost giddy at times and grateful at times. Definitely a Thanksgiving to cherish.
Posted by Frank at 7:59 PM No comments:

Started my "new job" this week. Working as a free agent writing grants. This may not be lucrative by any means but I hope to maintain my health and sanity by eliminating up to 2 hours of commuting each day, $150 of gasoline per month and 40 hours of imprisonment, chained to a desk each week. Now I can work at my leisure with a laptop at home or at Panera. I feel better already and its only Tuesday.

Election Day. I can't stand watching the returns. I can't fathom why people would vote McPalin after they regretted their vote for W. Obviously people DON'T learn from their mistakes. Wake up! And our disgustingly self-serving Senator Lieberwhiner is so constantly, literally, behind his candidate they're beginning to look like a same gender couple. Connecticut should boot him all the way to some Red State, preferably Alaska.

And speaking of Connecticut, since my last post more than a month ago, our Supreme Court declared Civil Unions unconstitutional, meaning that Connecticut is now the third state to allow same gender marriage. This has spurred a campaign here to vote "Yes" for a constitutional convention with the long term goal of establishing religious tenets into law.

I have mixed feelings on the issue of same gender marriage, having never aspired to husbandom. I will sum up my comments thusly:
1. Being half of a same gender couple, I consider myself a member of a family based on having a long standing relationship with a spouse-like man, long standing relationships with extended family, a household, a dog, utility bills, taxes and a shared committment to love, respect and care for my partner and he for me.
2. The "sanctity" of marriage went out the window years ago
3. Marriage is an arrangement for managing responsibilities, finances and long-term care (and don't give me bull about "procreation" cuz married couples who choose not to have children are still considered "married")
4. Either we (same gender couples) deserve the same rights on both the state and federal level or "married" couples deserve no special rights
5. The religious, morally arrogant faction will never be satisfied until they rewrite the constitution to establish their religious dogma as law

Regardless of how this election turns out, I am not hopeful. Bigotry, hate, hubris and ignorance abound.
Posted by Frank at 7:49 PM No comments: