I have changed the "Comments" settings to allow comments. I'm sorry I didn't catch this sooner.
Posted by Frank at 7:12 PM No comments:

(This is the most viewed post on my blog - 772 views as of 4/10/2012.  I have no idea why this should be so.  If you are someone who visits this post, please comment or email to let me know how or why you landed on Bruno's Lump. Bruno passed away at the age of 15+ in June 2009.  Our new dog Benni is filling Bruno's paw prints and then some -  take a minute to visit Benedict Bentley -  Benni's Blog. Thanks.)

This is one of those obscure pictures like you see of the Loch Ness Monster or an Unidentified Flying Object. But wait, we can get clarity. 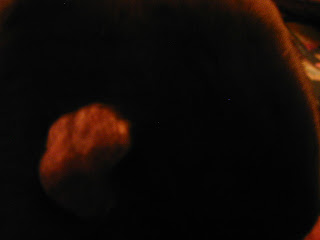 Or is it the Blob? It is currently an Unidentified Object of sorts and it is more or less permanently attached to our Dog Bruno. 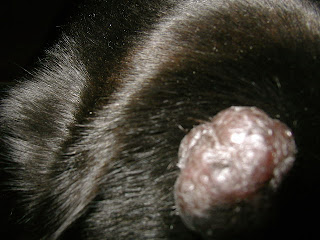 The ugly black skinned growth started out rather small. Kids would yell, "Your Dog has a tick!" We had to correct them, saying, "It's not a tick, just a growth, like a wart". The vet was not concerned. Her reasoning was it would be worse to have to put Bruno under anesthesia to remove the growth, than to leave it alone. We agreed. That was early last summer. 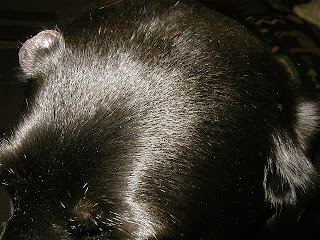 Meanwhile, the thing has grown to the size of a small planet. There are undoubtedly tiny creatures living their ordinary lives and conducting business transactions on its surface as I write this. The thing is positioned high on Bruno's head over his right eye. It doesn't seem to bother him at all, and he seems to have no sensation or feeling as he does not yelp or react if you touch or squeeze it. As a matter of fact, he is totally oblivious to its presence and to its unsightliness. The Dog is like a person walking around with spinach in his teeth or a practical joke stuck on his back saying "kick me". Ignorance IS bliss, no doubt. 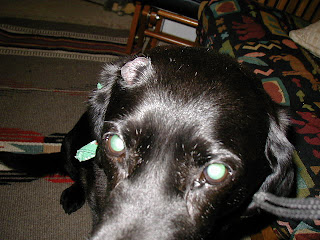 At nearly 14 years old, Bruno has earned the right to parade about with an ugly wart on his head, and not give a damn. I, on the other hand, would like for him to have it removed as I cannot think of any way to disguise it. I've thought of fashioning a little outfit for it, with a top hat perhaps, or painting it red and adding holly for the Holidays. We tease him about his brain leak, tell him not to eat so much, cuz it feeds the wart, and make him the butt of our jokes. But it doesn't faze him in the least. Bruno still is only interested in 1) Meals, 2) Snacks, especially his Kabobs or Beef Fillets which are his most expensive addiction, 3) going for a hike in the woods, and 4) making us get up off our butts as soon as we get comfortable to let him out to pee, or to close the door after he lets himself in. Oh, and 5) occupying his favorite spot on the couch, but only if the blankey is on. 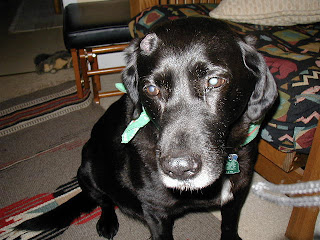 In spite of being nearly 14 and having a science experiment growing on his forehead, Bruno is still cute, or at least we think so. And he knows it. He has always used his looks and expressions to get his way and he still pretty much gets what he wants, when he wants it. I guess he's got a face, lump and all, that only a mother could love. Or in this case, only his two Dads could love.


This is one of those Dog lessons: "The ones who love you, love you warts and all".
Posted by Frank at 7:20 PM 6 comments:

Well, with winter upon us, the kitchen has been busy, partly to help keep the house warm without using too much fuel oil. First on the menu was Leon's Shepherd Pie, one of the many "comfort foods" we enjoy when it gets icy outside. 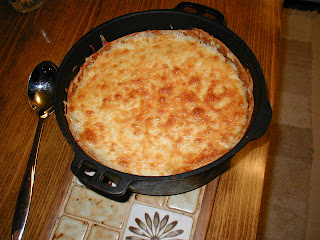 At Thanksgiving I made a fresh pumpkin cheesecake pie with an almond crust. It was good, but not my best. I blamed it on using half Splenda in place of sugar. I'm tossing the Splenda out...at least sugar is closer to natural. 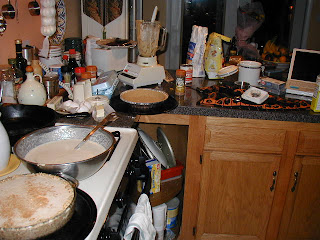 Thanksgiving Day at My brother and sister-in-law. They have a real colonial house, built in the 1700's. 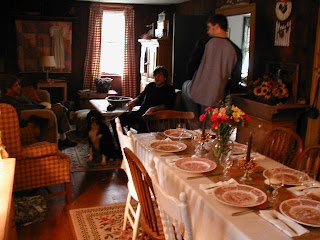 The snowstorm on Thursday the 13th meant we were let loose early from work. It took 2 hours to get home, which wasn't bad compared to the 3 to 8 hours other people spent in bumper to bumper traffic. But getting home early gave me a chance to make crispelli, a fried confection. Some people call them Angel Wings. They're made with flour, eggs, lemon rind and extract, sugar, BP. They have to be rolled out very thin and cut like wide fettuccine, cut in the center and twisted, then fried in oil and dusted with confectioner's sugar. 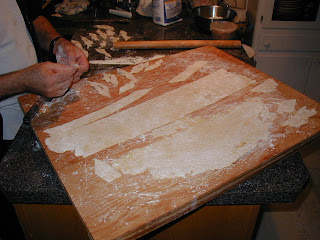 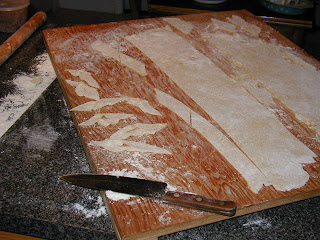 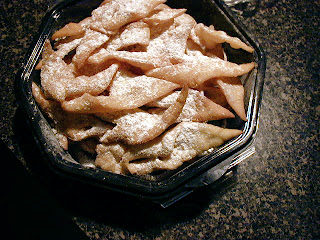 Saturday morning we got out back for a hike. Bruno Dog loves it. For a 14 year old, he does good. Leon and Bruno, me and Bruno, and Bruno sniffing "Umm, there's something under this white stuff" 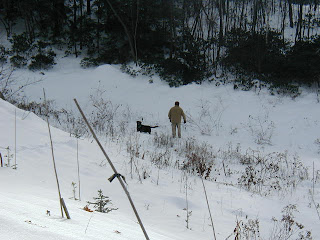 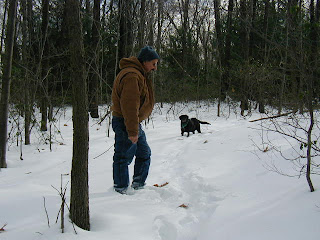 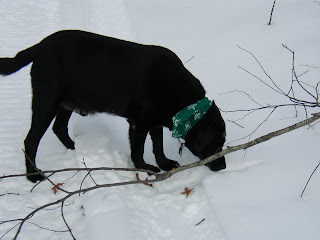 Today, Sunday we had an additional 3 inches of sleet, snow and crud. After cleaning the driveway, Bruno decided to collapse under the tree. The tree is our non traditional contribution to the season. Decorated with silver bells and silver painted mountain laurel, red summac seed pods and other things gathered from the woods. Leon wants to add popcorn and cranberries. 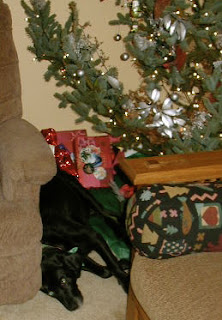 Today I made Aunt Stella's Secret Recipe Chocolate Cookies with Chocolate Frosting. They are made with flour, cocoa, cinnamon, cloves, a whole box of raisins, sugar, BP, butter (or margarine) and black coffee. Its a very old recipe, and I'm sure it has an Arabic influence. 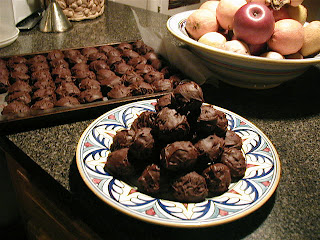