Picked up this book at Heathrow in March. As I've said, I'm not much of a reader because I'm slow and tend to nod off. This is only the second book I've read all the way through in the past year or so. 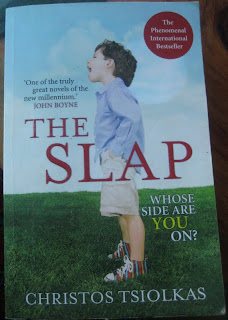 The Slap by Christos Tsiolkas, an Australian author, is an interesting study of a cast of diverse characters in a Melbourne middle class community.  They are all at a backyard barbecue when one of the characters, Harry, slaps a bratty kid, Hugo.  The kid's overprotective mother decides to have Harry arrested.  This in turn sets the group of friends and relatives to confront their values and loyalties.  Each chapter of the book centers on one main character and how they relate to their family and friends.  What makes the narrative more interesting is the varied religious and cultural backgrounds of the characters that influence their behaviors and beliefs: Greeks, Indians, Aussies, Aboriginals, Muslims, Canadians, Middle class, white trash, gay teen and all.

There's super masculine, Greek-god, Hector, his beautiful Indian wife Aisha, her friend Rosie, the obsessive mother of four-year-old-stil-breast-feeding-Hugo, and her deadbeat husband, Gary;  Gay teen Richie and his best friend Connie, both of whom had the hots for Hector;  the Greek patriarch Manolis, Hector's father and of course cousin Harry, the slapper, and his wife Sandi, to name a few of the main protagonists.

The book is not so much a story as a somewhat voyeuristic look at the private lives and thoughts of this interesting group of individuals.  Some of the reviews disparage the book for its hot, sexy scenes, but I found nothing offensive there.  It is well crafted and the writing is excellent.   If I ever thought I could write a string of sentences that would entice others to read what I had to say, I now know I am deluded.  Tsiolkas has a mastery of language that I can only aspire to.  A good beach book.
Posted by Frank at 8:48 AM