I haven't been following the news too closely.  Got pretty tired of the Catholic/Vatican/Coverup/Whatever.  It just seems to be going nowhere.  And I have pretty much the same feelings about the US political scene right now.

Still busy doing some paid jobs (grant writing) and even though it doesn't bring in much of a paycheck, I don't regret my decision to freelance.  No commute, and even better - no delicate personalities to tip toe around or make nice-nice to when I haven't slept well or am otherwise in a nasty mood.

Remember that truckload of concrete pavers I got for free?  Well, I had no project in mind and didn't know where to unload them.  Leon suggested I put an ad in Craig's List while they were still in the back of the truck.  Got a taker for $100.  Not too bad for a good workout and a drive to deliver them a few towns away - and two cute guys helped unload the truck to boot.

Hope the beautiful spring is not followed by a summer of strange meteorological phenomena caused by the volcanic eruptions in Iceland.  We have a friend who just went to London for two weeks - he may be there longer than he planned if the planes can't get off the ground.

We've never had a bird fly into the glass windows on our sunroom.
Too bad for this little fella, a pretty Cardinal. 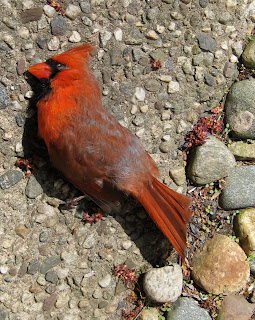 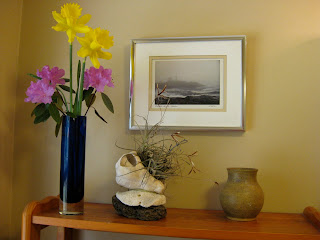