We have a disgracefully dysfunctional government.  As many of us already knew would happen, the Health Care Reform legislation would be watered down, compromised and twisted to death.  Our elected officials cannot seem to get over themselves and do what is right for the people.  The haves fear for their "way of life" a life that keeps them enjoying all the best this country has - real estate, education, medical care, travel, food, legal representation, services beyond imagination, cars, boats, planes and toys, etc. etc. They fear that by providing medical care to everyone in the country, they will lose their right to free or cheap health insurance and that someone might be rationing their health care.

Well, wake up!  Health insurance companies are already rationing care and deciding who gets what level of care.  All based on the bottom line profit.  What an outrageous system.  Do you remember when Health Insurance was totally non-profit?  Somewhere along the way the blessing was given for entities to make a profit from insuring people and denying claims.  A perfect formula for Wall Street investors.

I have only just heard a brief news report, but I am presently inclined to agree with Howard Dean of Vermont.  What is left of the Health Care Reform bill is garbage, throw it out.  This is not a case of some bill is better than no bill;  garbage legislation will do more harm than good.

I am so disgusted with the inability of the government to recognize their responsibility to do the right thing, especially for those who are poor, disenfranchised, and without a voice.  They are sworn to represent the people, not the lobbyists, big business, health insurance and pharmaceutical companies.   This is now a government for the wealthy, by the wealthy and that includes the Senators and Congresspersons.  And don't even get me started on Senator Leiber-whiner, the self-serving SOB who my state re-elected even after he became a traitor to the Democratic Party.  The weasel.

They can't pass a decent health reform bill, they can't do away with "Don't Ask, Don't Tell",  they can't see the folly of DOMA, they can't get past their own small-minded, morally-superior, hypocritical ideologies and make this a functioning country again.

If the wealthy think they can protect their status quo, I'm afraid that it won't be long before they are singing a new tune.  George Bush threw multiple billions of dollars out of our economy with his personal war on Iraq.  This war did not stimulate our economy as past wars had done because WE DON'T MAKE ANYTHING HERE ANYMORE.  And what we do make (like cars for Toyota, Honda, BMW, Nissan, etc. ) is for foreign companies who all take their profits home.  China practically owns us.  The state governments are practically bankrupt, the aging infrastructure is crumbling, the environment is polluted,  the glaciers are melting while Nero fiddles, and, if you listen to NPR, you will learn another 27 issues per day that you can do nothing about while driving to or from work.

All this, while priests molest children, while bishops determine how to help the Vatican control everything and while Entertainment Tonight keeps us up to date on Tiger Woods, Kate and Jon and others I've never heard of and could care less about.

So what can I do about this sorry state of affairs?  Make "Pasta alla Norma" of course: 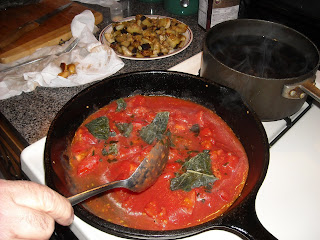 Saute the Eggplant in Garlic and Olive Oil; make a simple Tomato Sauce and add some of the Eggplant and some Grated Ricotta Salata.  Boil the Pasta, (I used Festonati, an unusual pasta shape).  Toss  the Pasta with the Sauce, serve with pieces of sauteed Eggplant and more Ricotta Salata.  Nice with a glass of Red Wine.  Could use a Seconda Piatta, but we skipped that for the Dolce (Christmas Cookies). 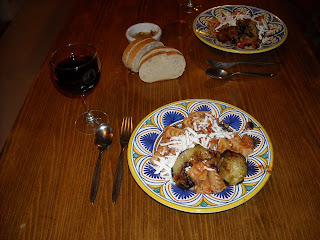 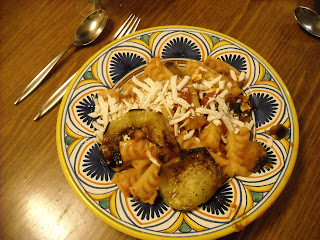 Great rant, FDEF! I couldn't agree more!! I posted something similar on my blog a few days ago. Ole LIEberman really got up my nose with his health reform antics, plus I was just generally peeved about how all of the potential we have in this country is being squelched and squandered so the fat cats can maintain their lifestyles. Expensive whores if you ask me! I'm really tired of supporting them.

BTW - Your food looks great! My partner is a great cook, too, so I'm happy to let him do most of it. I do ok at frying water and cleaning up!
Cheers!
Gary

The meal looks fabulous. I hope it hit the spot.

I echo your post's sentiments. I haven't been able to keep up with all the crazy hypocrisies to report on my site because there have been so many lately. I agree with Howard Dean as well! I'm so hoping that my partner, who's in a job search, gets something in Canada. I've had it with this country and our government's inability to rule in a just way for people of all social classes and minorities.

Hilarious side note: the word verification that I've been given to type to prove that post isn't spam is "trickin." You didn't pick that one out by chance, did you?

I agree wholeheartedly with your outrage, Frank. Though to be accurate, it's not "the government" as a whole that's the problem is it - that's how the Teabaggers talk - but rather that fraction of the Congress who are immovably opposed to any social progress, right? I.e., practically the entire Republican party. Plus the weak-kneed, yellow-bellied Dems who keep caving in before the onslaught.

And why the working classes who are the main victims of Republican fat-cat financial oppression keep voting them into office, says an awful lot about the American character, doesn't it?

And OMG your dinner looks larrupping good, Frank. But would you please repeat the recipe in English for us Texas boys?

And what is this about "make some tomato sauce" - huh? Tomato sauce grows in cans, don't it?

No, my word verification choice would be "mangia". What else.

When it comes to I-talian food, "No speeka da english"

OK, Russ, I put a nice link for Pasta alla Norma with plenty of English. Note: it was good, but not the best pasta dish I've made.

Hey thanks for the link, Frank, I can make out most of it except for the metric amounts. But no matter, it's beyond my scope anyway but I'm forwarding it to the ex-roommate who just loves to spend all day in the kitchen. I'll see if I can tempt him into rustling up a mess of it one day soon - it does sound scrumptious.