End of a Decade - And a Goodbye For Now

As 1999 was coming to a close there were dire predictions about the impending doom that was to take place due to Y2K computer meltdowns across the country and around the world. As far as I'm aware nothing of the kind occurred on January 1, 2000 - except in the office where I was working.  A database program designed for and purchased by a state department and being used by several state funded HIV/AIDS agencies including the non-profit agency I worked, would not, we were warned, recognize the year 2000.  In the previous months I had time to design an Access database into which I imported the demographic data we needed for our reports.  Sure enough, on returning to work on January 3, the old database was completely useless - completely! It may as well have self-destructed. Your tax dollars at work. 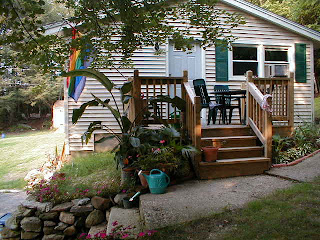 2000 ushered in the "New Millennium", a term I haven't heard much since.  It was the year we bought our little house in the woods - less that what we wanted but so much more than we could have asked for.  This is our place before we added a sunroom.

In October we we had an opportunity to accompany a friend of ours to Fire Island for a gorgeous Indian Summer day - our first time there - as she looked for a summer rental for 2001.  Leon and I were speechless when we heard the rental agent quote prices. 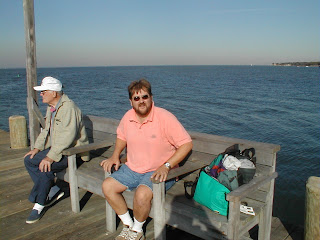 2001 was one of those good years when we seemed to be "making it".  We added the sunroom, took a summer vacation with some friends to Canada;  returned to Fire Island for a weekend with Barb; celebrated Leon's 40th birthday.  I think it was the year Leon told me I had "too much salt in my pepper" and got me started using Clairol.

We all probably remember exactly where we were on 9/11/01 when we got the news.  I was driving to Springfield to deliver a package for the agency I was working for.  It was a gorgeous September morning and I was listening to PBS radio.  The classical music was interrupted by a rather brief announcement about a plane hitting one of the twin towers, then a return to music.  My reaction was, "What? These things don't just happen. Why are they going back to music?"  I dropped off the package in a mail slot, began the drive back by then there was a report of a second plane crash. I was close to our girlfriends' house just south of Springfield. I knew Joyce was working at home, so I stopped there.  I made her turn on the TV and we watched in horror.  This single event has set into motion a chain reaction that continues to this day and has colored our world in ways we may not even realize.  My sense is that it triggered a world depression of the emotional variety and ultimately the coming depression of the economic variety. (I don't think we've even seen the beginning of an economic downturn - the implosion has barely begun). 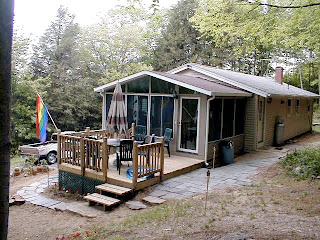 Despite the horror of this tragic event, life does go on with some semblance of normality.  One result was that no one was flying.  We were able to book a 6 day trip to Italy for $500 each, including airfare.  We added some days, and a few nights off the beaten path for a few dollars more.  It was my special thrill to show Leon around Rome where I had spent my Junior year of college. 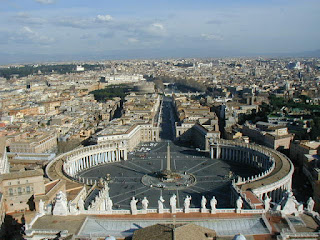 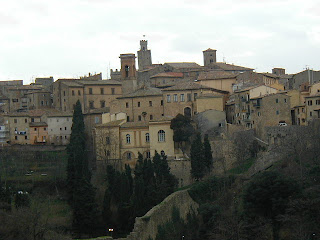 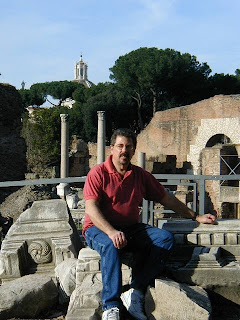 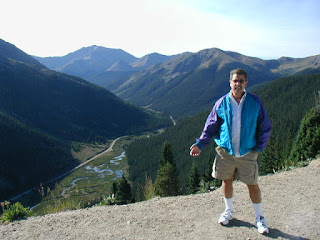 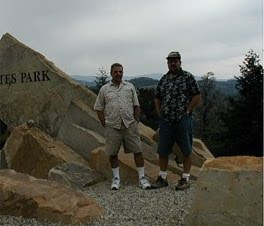 In 2002 I got sent by my employer to Boulder, Colorado for a conference and was able to add a few vacation days to the trip; it is a beautiful state.  It is sometimes the little things that one remembers, like the herds of joggers and bikers all running or biking as though compelled by peer pressure or guilt ... and seeming to not to be enjoying the experience. It reminded me of that Star Trek episode... And the crosswalk lights that had a time limit and a countdown ... this place meant business.

Was it 2003 when we took the proverbial 3 hour boat tour with Tony and Steve from PTown harbor to Wellfleet?  At that time it was a rare treat to be invited on the boat, so we said sure.  It was around one in the afternoon on a beautiful sunny September day when we headed out for a leisurely cruise.   When we got to Wellfleet we disembarked, walked around looking at boats, had a late lunch and decided we had better get back.  It was already way past 5 pm and the sun was low in the sky and the tide is going out.  Well, the channel at Wellfleet is marked by buoys that are quite far apart and barely visible from the harbor. 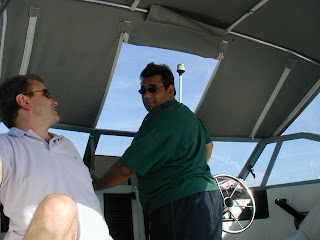 So were heading out and Tony flags down an incoming boat to ask the way to the channel. After getting the direction, Tony guns the engine, heads out but somehow decides its time to turn sharply right into open water.  Leon is looking at the depth finder showing 22 feet, 17 feet, 12 feet, 7 feet, and asks, "is this really supposed to be saying 6 feet?"  Tony gasps, cuts the engine as the depth finder reads 3 feet, then 2, then we come to a dragging halt and the boat lists to the side.  We are now stranded on Wellfleet's notorious sandbar, three miles off shore in the twilight at low tide.  Did you know that there are creatures in the water that glow at night?  Now, it was out of the question to call the Coast Guard ... not only could they not get to us, but the humiliation!  We could only wait till the tide came in to float the boat ... we got back from our three hour tour about 1 in the morning.

2004 was a quiet year, working, gardening, an annual trip to Provincetown. 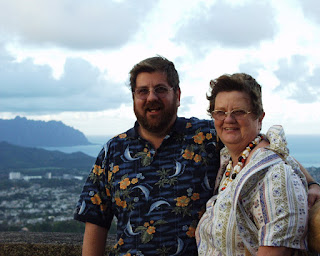 Our second "trip of a lifetime" took place in 2005 when we decided to go to Hawaii.  Foregoing travel planners as always, we devised and itinerary that took us from Oahu to Big Island and Kauai.

Leon, ever the good son, invited mom to come along for most of the trip, but we did manage the last few days on our own at a gay B&B in Kauai.
One of the highlights was our predawn hike up Diamond Head to watch the sunrise.
Big Island was not what we were expecting: vast areas of solidified black lava, almost desert-like. 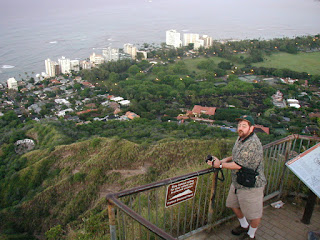 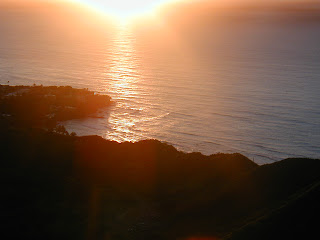 We hiked the trail to the island's active volcano, Kilauea, but when I felt the heat from under the hard lava, I sissied out. The park ranger had not encouraged us at all by warning about the possibility of falling through the brittle rock into hell.  We saw lava flowing into the sea from a distance.

The Luau at one of the nearby resorts on Big Island was too commercial and basically a disappointing rip-off.    We enjoyed a day of snorkeling with the tropical fish.  The scenery of the islands is absolutely spectacular. 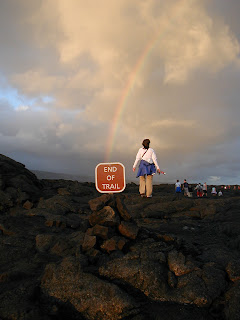 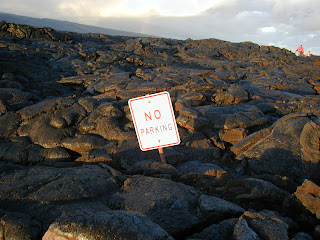 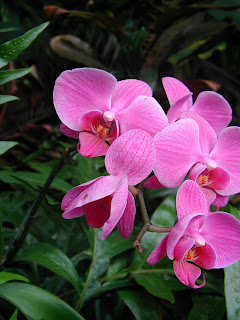 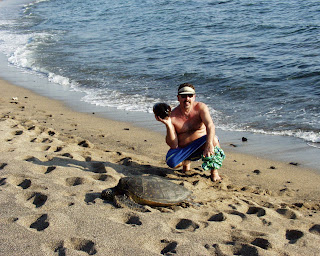 It is frightening how Things can change in an instant, in a day, how one's inherent flaws can be a determining factor in one's life.

The next year, 2006 was to be a difficult one.  I would lose my job, take a six week sabbatical colored by flashbacks and personal doubts and, upon my return apply for a nightmare.
The unemployment nightmare was a series of appeals and counter appeals by my former employer that played upon my anxieties and triggered  a persistent insomnia that often made it difficult to function over the course of the next two years. 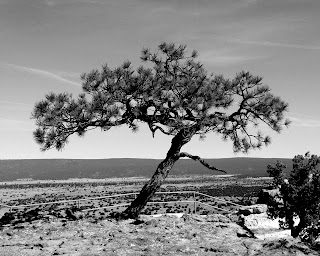 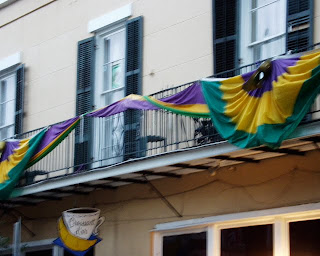 I have documented the road trip my blog Nuances and here on RR. 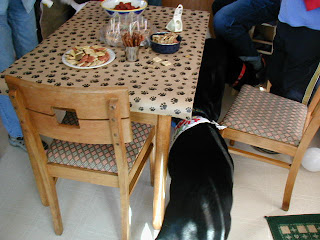 In October I landed a job - one that I was grateful to get and terrified to take - writing grants for a Catholic-based homeless shelter.  I never felt completely comfortable there.

I worked through 2007 -  and it was a year of blessings despite some of the setbacks and ramifications from the year before.  Bruno the dog celebrated his 13th birthday and had a party with 12 of his doggie friends and their people.

We used our camper as always as our home away from home.  We have pretty uneventful lives when we're not traveling or camping. 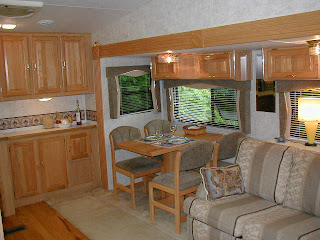 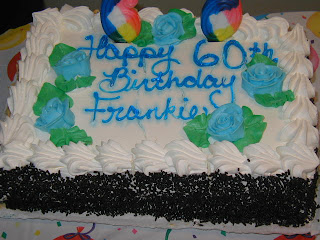 I turned 60 in 2008, a number I still find it difficult to say.  I had been looking for another job and had actually planned on leaving the agency I was working at when my boss "left unexpectedly".  Things were bound to happen and I knew it was a good time to get out.

I was offered a part time consulting position with a non-profit in my town - it was time.  I don't make a lot of money, but I have no commute as I work at home and I can actually work from just about anywhere, given the internet and email. 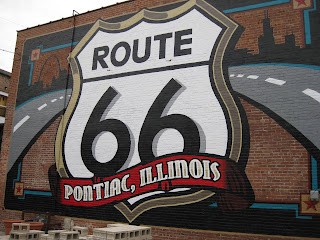 We began 2009 in Illinois, both Leon and I were sick with bad colds.  The weather there was brutal and the rest of the winter at home was cold and snowy and much too long. 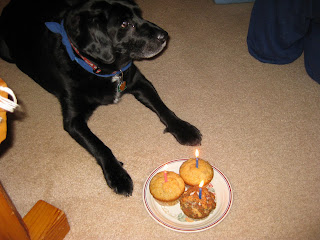 Our beloved Bruno had his 15th birthday in February 2009, and went to doggie heaven in June.  It was a very sad time and I'm not sure if things have been just right since. 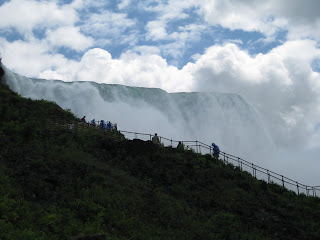 We took a camping trip to western New York State early this summer and I saw Niagara Falls for the first time. 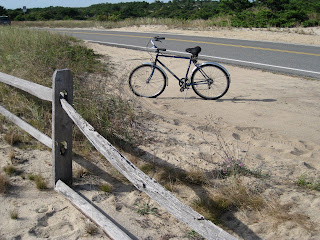 Even though I had the opportunity to spend six weeks at the campground in Provincetown this year, it just wasn't the same without the Bruno.

So here we are at the end of another decade,  whatever significance that may have.  I am seriously thinking of putting this blog to rest - at least for a while.  I have been spending a lot of time in the blogosphere of late and I think I need to get outside more or work on other projects.

I guess I won't sever ties completely because, well there may be something in the days ahead that I may want to share with you all, whoever you might be.  I promise to continue to reluctantly rebel.

Wishing us all a very Interesting New Year, one with unexpected blessings and opportunities.
Posted by Frank at 8:32 PM