How much does it cost? It cost twenty cents. 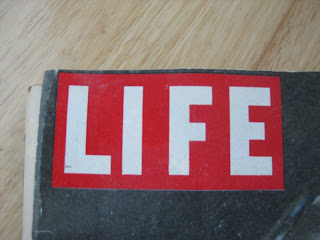 In 1964, Life Magazine published a fascinating, horrible, exciting, disturbing, informative, ignorant, groundbreaking, judgmental exposé entitled, Homosexuality in America the publication of which was timed to heighten my adolescent nightmare.  I don’t remember how I found it.  I don’t remember where I bought it.  I do remember I read it.  My heart was racing, my palms sweating, adrenalin rushing through me, as I opened the magazine to the article with a two page spread of pictures of sleazy figures in dark city shadows.  I remember the excited, scared, shaky feeling I had looking at the pictures, knowing that these men were somehow  like me, but not sure how.  I was at once, fascinated by them, envious of them, and horrified that I might become like them.  I hid the magazine behind the wall of built-in drawers in my attic bedroom.

There were two compulsory activities I dreaded in high school: gym class and First Friday Mass. Gym class was a given.  Get out of it or suffer.  Anxiety.   Humiliation.  Shame.  Those who were slow in math or reading got placed in classes at their academic level where they would not be embarrassed or lost and could get extra help.  But there were no remedial gym classes for those of us who could not catch a baseball or throw a football or who had no innate knowledge of the choreography of basketball.

First Friday Mass was another Catholic school ritual I couldn’t avoid.  It was based on some Saint’s vision and the instructions of an apparition that it should include holy communion for a certain number of uninterrupted weeks in order to secure some special grace.  It was not easy for most Catholics to meet these criteria.  Because it wasn’t every Friday, it was easy to forget, so you’d miss one and have to start over.  Or you would eat something just before Mass and break the fast, so couldn’t receive Communion.  Or, God forbid, you committed a mortal sin and there was no confessional in sight.  But when it was part of the school calendar, you at least couldn’t forget.

It was the marks on the slate that were the problem. By most Fridays I had chalked up more than a few checks on the board.  And even more so, the recognition of my inherent urges and desires, and the power they seemed to have over me, along with the theo-logic of Thomas Aquinas, mandated that I could never be worthy to receive the Sacrament.  The “good Catholic boy” was a sham, sitting in the bleachers in the school gym, struggling with the decision of whether or not to go to Communion: be the only one remaining seated or commit another sacrilege.

Until then, being a sissy meant that I might be a failure in gym class but I could at least be a relatively good Catholic boy.  Learn prayers in Latin, imitate the Saints, turn the other cheek. But it became more and more inescapable that who I was, was among the most despised, vile and hated of humans, to be rejected, not pitied.  Who I was, deep inside, was a sin.  It was not just my sexual release that was sinful; it was my very identity, my being, which was unforgivable.

My religion was singling me out, making me sit on the bench when everyone else was in the game.  My religion may as well have been calling me a faggot and making damn certain that everyone knew it.  I was unforgivable and pathetic.  I could not not sin.  I had only a vague sense of this fusion identity; it was like telling a lefty that it was a sin to do anything with the left hand and expecting him or her to be just like all the righties.  This reality began to resonate to my very core, referencing every perception, experience, thought.

But being Catholic was as much my identity as being Italian-American. I always considered myself more of a Catholic than a “Christian”.  People who called themselves Christians had no real roots or traditions, only borrowed and water-down rituals, borrowed from the Roman Church, hardly recognizable and totally out of context.  Grape juice, what a joke!  Catholics, on the other hand, had almost two thousand years of tradition and scholarship behind them.  Every tradition, every ritual, every prayer, and every sacrament had an explanation, a history, a meaning and logic. Bread and wine were ancient symbols. The accouterments were elegant as well: beeswax candles, gold chalices, rich vestments, incense burners, Gregorian Chant, symmetrical processions, impeccable choreography.  Perhaps being Catholic was more identity than religion.  So one aspect of my identity was at odds with another.

To be fair, values of compassion, tolerance, concern for the poor, the hungry, the prisoners and the marginalized, were not only taught by the Catholic Sisters, but practiced as well. (Fortunately, I was never exposed to the Church’s many priest-pedophiles); Pope John XXIII was visiting prisons, walking in the streets and selling off jewels; eventually Catholic theology would talk about social justice, and Liberation Theology would become accepted wisdom. Progressive thinkers would take Feminist Theology seriously.  Later, there was even a brief hope, ultimately dashed, that the theologians might include me, and those like me, in God’s Plan.

Catholicism was an elegant religion.  No wonder so many gay boys were lured to the priesthood.  What other profession allowed one to remain unmarried without insinuating questions, perform in the theatrics of the Liturgy and also provide respect, status and a lifetime of job security?  All-male seminaries and the opportunity to hang around educated and like-minded young men was a bonus.

Since childhood, there were family that expected me to become a priest because of my temperament and religious proclivities.  It was as though they had an unspoken formula for making that determination, especially in Italian-American families.  It went something like this:  (Italian Boy) + (Sensitive) + (Good Student) – (Girlfriends) – (Sports) = Priest.  Sex was not a part of this equation.  The absence of heterosexual interest did not necessarily indicate disgrace, only the recognition of a higher priority, the vocation.  Homosexuality was absolutely not openly acknowledged as a factor.

So the saving grace of many sissy boys was the possibility of joining the (supposedly) non-sexual or asexual priesthood.  As priests they would carry on the traditions, provide the rest of the community with a communication network to God and the Saints, ensure a smooth transition to heaven for both the faithful and the deathbed converts and be held in high esteem because they were chosen, had a call, a vocation, from God Himself.

Although I could recite Latin prayers and knew the rubrics and rituals, I never became an altar boy nor seriously considered the seminary.  If anything, monks’ robes were more appealing, living in a monastery, gardening and making jelly.  But I was not the good teenage boy or young adult people imagined me to be.  I had powerful, lustful, sinful, wonderful urges that fascinated and confused me.   How could anyone possibly think I could become a priest?

Yes, I dreaded First Friday Mass in high school; it was humiliating.  The clean slate from last Saturday evening’s confession would have already been tarnished by Monday morning and taking communion on Friday would not only have been another deadly sin, but also a sacrilege. It was all so difficult, too impossible to pretend to be virtuous while living a lie.

It was inevitable that my “two lives” would conflict on some plane, and that my secret would be found out.  When I began avoiding holy communion at Sunday mass, it became the subject of inquiry at home one Sunday afternoon.  And that’s when I retrieved the Life Magazine from its hiding place to use as a weapon against the inquisition.

As a direct result of my shocking and sickening revelation, I was taken first to the rectory for a consultation with the priest, then to see a psychiatrist.  What an idiot he was.  I couldn’t figure out his inability to communicate. There was no communication.  I think he was thoroughly uncomfortable with even the topic of homosexuality.

I recall one session that was particularly frustrating.  The doc, probably attempting to break the ice or out of sheer anxiety, or using some psychoanalytical technique, began talking about his daughter.  “My daughter is in high school too and she’s been studying all week for a geometry test today.  She was all worried about the test.  I told her not to worry because she always gets good grades and is good in math as well as in everything else”.  And on and on, Blah, blah, blah…for what seemed like half an hour.   Maybe it was a technique to get to me, to make me angry.  It did.

I was getting annoyed and bored.  This is supposed to be about me after all.  I’m the pitiable teenage homosexual.  After a period of silence, I finally interjected, with some sobbing for dramatic effect, “It’s not fair.”  I grew up and went to school in a neighborhood called Frog Hollow, known for a certain spoken accent that elongates diphthongs. So the doc, being stupid and trying to be therapeutic asked, “What do you mean, ‘It’s not fear’? What is it then?  Are you afraid of something?”

Whether he was attempting some stupid therapeutic technique or whether the man was just actually obtuse was immaterial.  That experience has colored my opinion of psychiatry and psychiatrists to this day.

The only advantage I was able to leverage from this consultation was getting the doctor to give me an official excuse to drop dreaded gym class from my schedule.  After a few sessions I told my parents that I didn’t need to see him any more.  (Turns out later, they thought I was “cured”.)  Having a psychiatrist, even if only for a time meant I was officially “troubled”.

I knew innately that troubled teens, of course, write poetry...