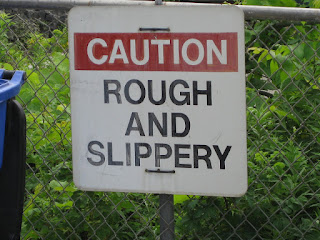 I have posted this comment in reference to a website for "Outing" non-celibate gay (or straight) priests in Washington, DC in response to the Archdiocese interference   on Fr. Goeff Farrow's blog and on Sebastian's blog; I don't know if it will get posted on either:


The issue is not job security [for priests] and your argument about ends vs means is inaptly applied to LGBT rights vs outing.  The issue is whether to expose Catholic bishops' and clergy's hypocrisy and duplicity in spite of any collateral damage such exposure may cause.  This church has become toxic and it is time to call 911!

When I came out at 36 through a local Dignity chapter I was soon shocked to learn that there were non-celibate priests, sexually active gay priests and priests involved in long-term romantic relationships.  I filed this information away because, at the time, I needed to focus on my own coming out process.  But now, when I think how so much of my adolescence and young adulthood was wasted struggling to reconcile my "objective disorder" and my Catholic religion, while the priests who represented that religion and all its rules and dogmas were doing what I was forbidden to do, I still get angry.  The rejection of my sexuality by the church, the horror of the confessional, the years of self-hatred, poor self-esteem, spiritual abandonment, not to mention the years of therapy, have had significant impact on MY life and MY ability to earn a living.

If this is a matter of economics and job security, I dare say that the church's stance on homosexuality has had a direct impact on ME: academic underachievement,  the choices of careers in which I could feel comfortable - mostly non-profit, dead-end, helping professions. Many of us out here don't have a pension or a health care plan.  I don't see the church coming to our rescue.  As a matter of fact, in Washington,DC, they actually threaten to withhold assistance to the most needy, holding the poor hostage to Catholic political ideology around LGBT rights.  Talk about collateral damage!

But the issue is not about job security for priests.  It is about hypocrisy, duplicity and the continued psychological abuse of minors.  (Thank god, most young people now have a mind of their own).  It is not OK to insist that the boys in the pews be pure and chaste while the boys in the rectory are sneaking off to the baths or Palm Springs or cruising on Silver Daddies.  As a gay man in a loving relationship I am not welcome in the Catholic Church.  Perhaps if I had clandestine encounters, one night stands and sex in the park, I could periodically repent, go to confession and take communion.  Then I too could appear to be a celibate, spiritual person.

In 2009, there should be no question of whether to have to out or not to out anyone.  If your "objective disorder" precludes you from being a card carrying, holy-communion-receiving Catholic, then say good-bye, go to the unemployment office and be a man.  Don't ask, don't tell is a cop-out.

Unfortunately it has been the outspoken, gay-supportive, celibate gay priests who have been most unfairly persecuted by bishops, while the promiscuous and secretive have survived to verbally denounce homosexuals and LGBT rights or, by their silence, to allow others to do so. And I'm not even talking about the pedophiles.


Perhaps the Catholic Church and the Anglican Church should do a hostage exchange, at a remote location, somewhere in Spain.   - FDeF