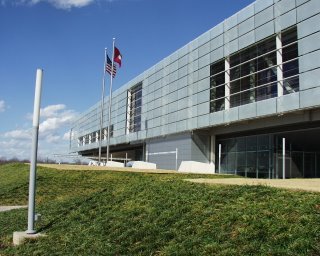 Drove on Thursday till we got to Little Rock: destination the Clinton Library. Leon was practically in tears as he heard about all the achievements of the Clinton presidency while at the same time realizing that they’ve all be Bush-whacked. Hell, we’ve all been Bush-whacked.

I certainly understand the importance of documenting history, of preserving the memoirs and mementos, of showing the world your best side and presenting a positive spin. But I could not help getting the impression that Bill was completely full of himself. The Clinton Library is decidedly a monument to the Greatness of Bill. My only disappointment was that the Blue Dress was not among the memorabilia.

Woke up to news that tornadoes devastated parts of Arkansas. We probably wouldn’t have noticed because the truck traffic over the highway bridge practically above the RV park was such a constant rumble.

We’re both a little tired and cranky after last night. Talking to neighbors who travel in their RV for 6 months a year. Have encountered several couples who full or part-time in their RVs. They talk about work-camping: working at a campground in exchange for a campsite; or other work/travel arrangements. Those who sold their homes, all the furniture, the pots, pans and dishes, even their great-grandmother’s handmade quilt and their first-born’s baby shoes. They now travel the interstates and backroads to adventure, or to warmer climates: Nevada, Arizona, Florida, Mexico, where they play cards or golf with their comrades. They are baby-boomers and the “tint and rinse” (thank you Michael) crowd, retirees with pensions and kids who are doctors and architects to care for them in their old age. The word pension is not, nor ever will be in my actively experienced vocabulary.

So, yes, I do think about my current predicament. Yes, I do experience some anxiety, resentments, existential questions: being who I am has brought me here. I wasn’t born with corporate genes, or secondary sexual characteristics of competitiveness and one-up-manship. I was never taught about financial security, wealth management, trust funds, or tax loopholes.

The good Sisters of Mercy taught us to “feed the hungry, care for the sick, visit the imprisoned”; they told us that “blessed are the poor”; that “it is more difficult for a rich man to get to heaven than for a camel to pass through the eye of a needle”. We read wisdom words about how “sanctity is like humility: as soon as you think you have it, you lose it”.

At the same time Walt Disney was teaching us to “wish upon a star, makes no difference who you are” (I'm beginning to think it was the particular star that mattered, 'cuz I'm still waiting).

Later President Kennedy would ask what we could do for our country and start the Peace Corps. Even the hippies were anti-materialistic. So, what has happened while I worked in a group home with disturbed youngsters, in a children’s psychiatric hospital, in AIDS programs and volunteering with gay youth and working in non-profits?