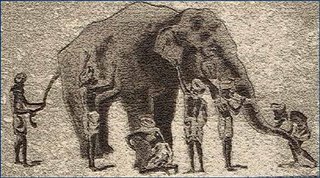 When I decided to apply for unemployment upon our return home, I knew that my former employer would contest it. I could elaborate on that theme but won’t. Suffice it to say that my lived experience of my stress breakdown differs from what others perceived. (Who can argue with that? Your perception is as real to you as mine is to me. They have done psychology experiments asking eye-witnesses to describe events in detail. No two people perceive things in exactly the same way. For Example, click. Remember The Six Blind Men and the Elephant.

I do not consider myself an evil or violent person. Sometimes even good people do and say things under stress that they might not do or say otherwise. I cannot help but be reminded today of a story my grandmother told. Her stories often had a Catholic, old world flavor and a lesson:

There once was a man, a hermit of sorts, who lived alone in a small house in the countryside, a great distance from his neighbors. He was a good man who practiced his woodcraft on his own and went to Mass and received the sacraments every week. Every week, before Mass and communion, he would go to confess to the priest who was considered by all the parishioners to be a wise and holy man.

Every week, it was the same story. The man would say, “Bless me father, it has been a week since my last confession…I have no sins to confess. I go to church every Sunday, I don’t eat meat on Friday, and I don’t get drunk or curse or swear. I honor my parents and have no lust in my heart.”

Every week the priest would tell the man, “For your penance, say three Hail-Marys and give alms to the poor.” One day, the man confessed to the priest as was his habit, “Bless me father, it has been a week since my last confession, but I have no sins to confess…” The priest, who was becoming a bit impatient with the man’s pride, instead of assigning the Hail-Marys and giving alms to the poor, told the man, “For your penance, go out and buy a chicken and bring it home and keep it”. The man had never heard of such a penance but did not question the holy priest.

So the man went to the chicken vendor and bought himself a nice young chicken and took it home. The following week, the man went to see the priest in confession. He began as usual, “Bless me Father, it has been one week since my last confession” but he then said, “for I have sinned”.

The priest smiled imperceptibly as he asked the man, “Tell me my son, what sins do you have to confess?” The man replied, I have sworn and cursed many times every day, I have entertained thoughts of revenge and of violence, I have cursed my mother and the day I was born and I drank wine last night till I passed out.” The priest was not surprised in the least, but pretended to be so, “And why would a good man like yourself do such things?” The man replied, with some disgust, “It’s all because of that godamn chicken who's always getting in my way, constantly cackling, crapping all over the place, knocking things over and is possessed by the devil himself. I would have killed it for dinner days ago if I didn’t have to keep it to fulfill your silly penance.” The priest replied, “For your penance, my son, say three Hail-Marys and give the chicken to the poor family on the hill.”